The Hotest Watch Ever Produced...Quite Literally 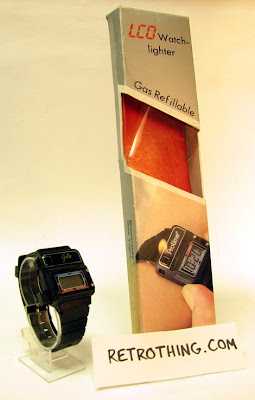 Think this was the first watch lighter ever? Nope, check this one from 1947-->link

Japanese Oddvertisements of Seiko in the Early Eighties

A memoriam of dead rock stars and seiko watches...very strange indeed, especially when they show a pool for Brian Jones. I was totally expecting to see a toilet for Elvis. Their point? Maybe if they wore a Seiko, their time wouldn't have run out?? Video-->Link

A group of three commercials that include Mary Lou Retton creeping out a Doberman, A supercool car with hydrolic watch storage and lastly a commercial that can only be seen, not described. Video-->Link Ettore Sottsass has passed away soundly in his sleep at the age of 90. Founder of the influential Memphis design movement and the iconic 1969 Olivetti typewriters, he also designed watches for Alessi, Seiko, Tissot, and Cleto Munari.