1961 Hamilton Vega
Richard Arbib - Influencial designer of 1950's futuristic cars like the 1955 Nash Astro-Gnome, 1957 Century Coronado boat, vacuum cleaners and WWII Bombs! It was revealed that the Hamilton Electric series (Hess Article) including the first battery powered watch, the 1957 Ventura was based upon some of his bomb designs. Also mentioning that fact when admitting his inspiration for putting fins on cars. 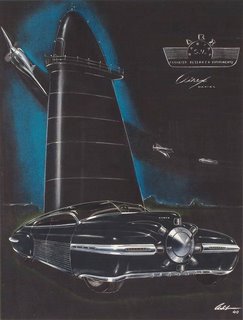 1940 Sketch for Airex Radial
First around the pylon is this black beauty by Richard Arbib, penned during his brief career at GM. Up front sits a radial engine straight out of an aircraft. Alas, there's no traffic-clearing propeller; instead, the chrome front bumpers provide a visual facsimile.

Yeah, I see the bombs now... Duck and cover.