First Look at the HM3 - Horological Machine No 3 Starcruiser & Sidewinder!

First Look at the HM3 - Horological Machine No 3 Starcruiser & Sidewinder! 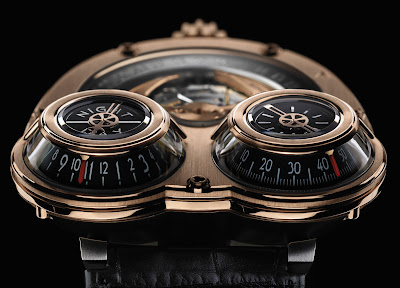 I was lucky enough to be one of the first people in the world to see the latest from Maximilian Büsser & Friends this morning. Max and Stephen Hallock of MB&F met me for breakfast at NYC's Brasserie to unveil the coolest Horological Machines yet. I hate to use one word to describe the HM3 Sidewinder and Starcruiser, but here it is... WOW.

Summed up, this watch has two variations. The red gold Starcruiser (above) and white gold Sidewinder (below) with two sapphire cones rising up from the case to reveal hours and day/night indicator and the other cone for minutes - transmitted via ceramic ball bearings to laser-cut hands and visible as a drivers style watch, on the side. Each watch shown here displays 10:45 am. 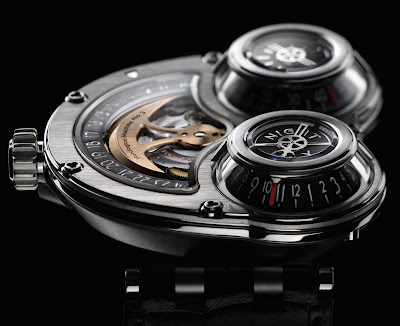 But what really sets it apart is the fact the movement with automatic rotor is upside down! No more turning your watch over to show off its most essential element. The signature Grendizer battle axe rotor swings wildly under each dome adding to the many layers of the most dimensionally effective Horological Machine to date.

The date wheel surrounds the movement through each dome and indicated by an arrow cut into the case.

Two styles are available in both red gold and white gold. The Starcruiser has both cones on the inside of your wrist and the Sidewinder with cones vertically next to your hand. Both are read easily without turning your wrist. Great when you're driving so fast you can't take your eyes off the road...or sky. 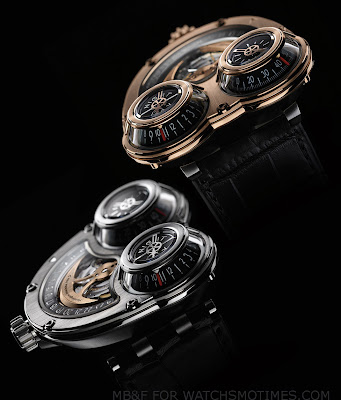 Warning! Horological Machine No3 (HM3) is so far outside existing timekeeping references that it may cause sensory overload. The mind first attempts to take in the kinetically active movement, paradoxically seen in all its glory on the top of the watch and partially circumscribed by a ring of large numerals. However before that information can be processed it is assailed yet again, this time by twin cones rising majestically from the sculptured three-dimensional case. No wonder many struggle to reconcile the reality that this dynamic sculpture is actually a highly technical wristwatch that tells the time and date. 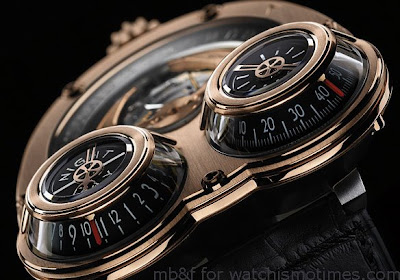 Welcome to the world of MB&F!
Individualists demand choice, so HM3 is available in two versions: ‘Sidewinder’, with cones lined perpendicular to the arm and ‘Starcruiser’, with cones in line with the arm. Each version has its own very distinct visual characteristics and each offers its own angle on telling the time.

The twin cones respectively indicate hours and minutes, with the hour cone capped by a day/night indicator. An over-sized date wheel allows for large, legible numbers with the date indicated by a neatly engraved triangle on its perimeter.
However, it is the spectacular open-air theatre presented by the finely finished movement, with its swinging battle-axe shaped automatic rotor and fast oscillating balance wheel, which mesmerises the eye and astounds the senses.
Turning the watch over reveals the technical secret behind HM3’s inverted movement: two large high-tech ceramic bearings efficiently transmitting power up to the cones and date wheel. 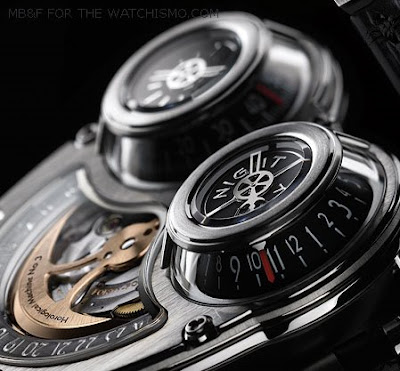 About MB&F
After decades learning and conforming to the corporate rules of watchmaking, Maximilian Büsser broke the chains and started a rebellion - a rebellion called MB&F. MB&F is an artistic and micro-engineering concept laboratory in which collectives of independent horological professionals are assembled each year to design and craft radical Horological Machines.
The ramifications of these audacious projects are profound. Respecting tradition but not shackled by it, MB&F fuses traditional high-quality watchmaking with cutting-edge technology to create three-dimensional kinetic sculptures.

Horological Machine No3 is the third chapter in the story of MB&F’s horological revolution; it is a story of adventure, of excitement and of passion.

“The Earth is a cradle of the mind, but we cannot live forever in a cradle.”
-Konstantin E. Tsiolkovsky, Father of Russian Astronautics, 1896.

Inspiration and Realization: Horological Machine No3 was developed to display the machine’s beautifully finished movement in operation. Harmoniously crafted bridges, rapidly oscillating balance wheel, gearing and distinctive battle-axe shaped automatic winding rotor are all open to view. This allows the wearer to fully appreciate the art and craft that makes up HM3 and draws the viewer’s gaze inside the highly complex machine; a machine comprising more than 300 fine-finished, high-precision components.

The movement of HM3 has been literally turned upside down to allow for an uninterrupted panorama of the solid gold winding rotor’s graceful arcs and the high-speed oscillations of the balance wheel. Jean-Marc Wiederrecht, winner of the inaugural award for Best Watchmaker at the 2007 Grand Prix d’Horlogerie de Genève, was entrusted with turning the drawings and designs of Max Büsser and designer Eric Giroud into horological reality and, with his team at Agenhor, he not only met but surpassed the challenge. 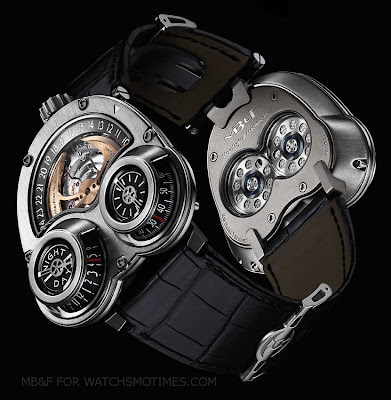 White gold Starcruiser
Starcruiser and Sidewinder: MB&F’s Horological Machines are for individualists who demand art, craft, excellence, exclusivity . . . and choice. To cater to these demanding aficionados, Horological Machine No3 is available in two versions: ‘Sidewinder’, with its cones lined perpendicular to the arm and ‘Starcruiser’, with its cones in line with the arm. Just like their potential owners, each is very special, each is very different. 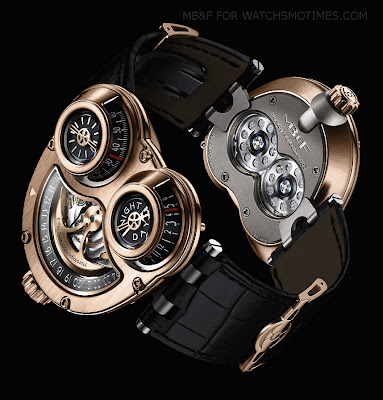 Red Gold Sidewinder
Indications: The three-dimensional time-indicating cones allow for telling the time at a glance, whether driving or typing; however, the fact that nothing like them had ever been attempted before in horology posed considerable challenges. The top caps of the truncated cones are brazed (not glued) to ensure maximum water-resistance and the red ‘hands’ of the hour and minute indicators had to be cut by laser to obtain the incredibly high precision with minimum mass that the design necessitated.

The over-sized date wheel is actually a larger diameter than the movement, a fact that allows for very legible and well spaced 2.5mm high numbers. A neat triangle engraved into the top of the case marks the date. 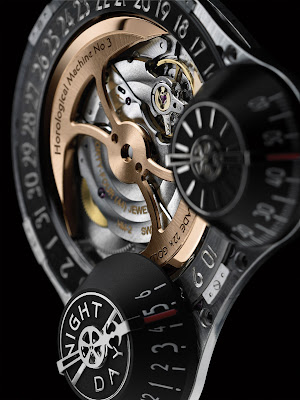 Exposed automatic rotor, domes and hands
Mystery Rotor: the prominence of the 22K solid gold battle-axe shaped rotor on the dial of HM3 is certain to increase the recognition of this already iconic MB&F symbol. The rotor is a ‘mystery’ because it appears to defy the laws of physics in being symmetrically balanced instead of having a visibly off-centred mass. This is achieved by machining the underside of one arm to a razor-thin edge so reducing its mass.

“The knack of flying is learning how to throw yourself at the ground and miss.”
-Hitchhikers Guide to the Galaxy 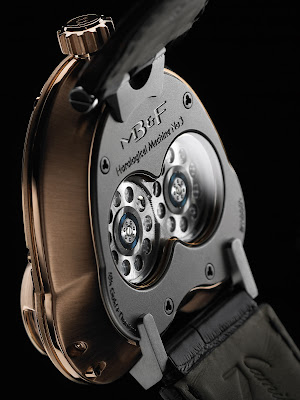 Ceramic Bearings: Time indications are usually located on the top, or dial side, of a movement. As the movement of HM3 is inverted to display its operation, an efficient solution was needed to bring power from the bottom of the movement to the timekeeping cones and date wheel at the top. Standard pinions set in jewels would have required complex, friction-generating gearing, and would require support top and bottom – a factor which would increase the height of the movement, and thus the watch. So instead of standard jewelled pinions, HM3 features two large-diameter (15mm) high-tech ceramic bearings. These minimize the number of gear-wheels (and thus friction) because of their large diameter and, as they only require support at one end (the base) due to the rigidity resulting from their ultra-high precision design and manufacture, they allow for a thinner movement. 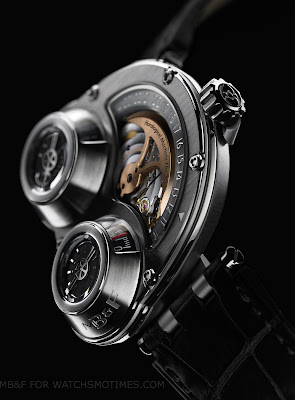 Large Date: The over-sized date ring has a diameter larger than the movement. While the design allows for large (2.5mm high) easy-to-read numbers, the considerable distance between each number, while aiding legibility, required great ingenuity in enabling the date to be adjusted. Technical constraints in using the crown to operate the date meant that a pusher was called for; however, a pusher has an approximate travel of only 1mm – far short of the 4mm needed to move the date wheel from one day to the next. An ingenious system of amplifying the pusher’s travel was developed using efficient gearing to multiply by four the distance travelled by the pusher. 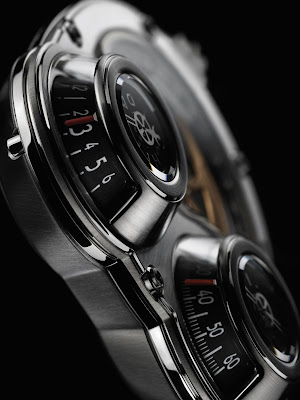 2:35
Sapphire cones: Three-dimensional cones have never been used to display time before, and no wonder as their manufacture was said to be impossible. Fortunately the impossible just took a little longer. The difficulty lay not in actually fabricating the cones, but in polishing the interior of their (originally) translucent surface until transparent. The caps of the truncated cones are brazed (a high temperature soldering technique) to their gold rims, a technique which is aesthetically pleasing and ensures a solid and waterproof construction.

Screw heads: Perfection lies in the details, form follows function. Those two statements explain both the reason MB&F has gone to the effort of redesigning the slots of the case screws and their unusual cloverleaf shape. Sharp-edge shaped screw slots require sharp-edge shaped screwdrivers, a tool tailor-made for scratching polished gold screws. The rounded cloverleaf pattern in the head of HM3 screws is not only pleasing to the eye, it reduces the chances of damage to the screw. Horological Machines are micro-mechanical works of art and demand that each and every component both looks superb and functions impeccably. 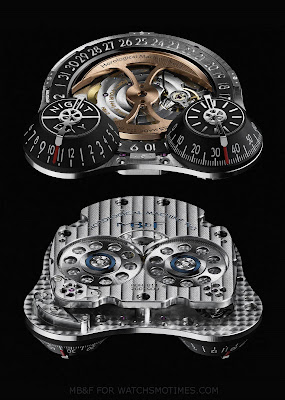 Number of jewels: 36 (all functional)
Number of components: 304

Cones and both display backs with anti-reflective treatment on both faces.

'Friends' responsible for Horological Machine No3

MB&F - The Genesis of a Concept Laboratory

The projects that gave Maximilian Büsser the most pleasure and personal satisfaction during his seven year tenure as head of Harry Winston Timepieces, were those working with talented independent watchmakers on the exciting Opus series watches. An idea for his own personal utopia emerged; that of creating a company dedicated solely to designing and crafting small series of radical concept watches in collaboration with talented professionals he both respected and enjoyed working with. The entrepreneur in Büsser brought the idea to reality.

MB&F is not a watch brand, it is an artistic and micro-engineering concept laboratory in which collectives of independent horological professionals are assembled each year to design and craft radical Horological Machines. Respecting tradition without being shackled by it enables MB&F to act as a catalyst in fusing traditional high-quality watchmaking with cutting-edge technology and avant-garde three-dimensional sculpture.

Maximilian Büsser was born in Milan, Italy, before moving at an early age to Lausanne, Switzerland where he spent his youth. Growing up in a multi-cultural environment and family - his father was a Swiss diplomat who met his mother, an Indian national, in Bombay - led Büsser to develop a cross-cultural broad-based approach to his life and to business.

In July 2005, at the age of 38, Maximilian created the world’s first horological Concept Brand: MB&F (Maximilian Büsser & Friends) in which he is now partnered with Serge Kriknoff. Büsser's dream with MB&F is to have his own brand dedicated to developing radical horological concepts by working in small hyper-creative groups composed of people he enjoys working with. MB&F presented its first timepiece, Horological Machine No. 1 (HM1), in 2006and followed that up with HM2 in 2007 and HM3 in 2008, and Büsser has more radical machines in the development pipeline.

Entrepreneurship is Maximilian Büsser's forte. In 1998 and only 31 years old, he was appointed managing director of Harry Winston Rare Timepieces in Geneva. During his seven years there Büsser developed the company into a fully-fledged and well respected haute horlogerie brand by developing the strategy, products, marketing and worldwide distribution, whilst integrating design, R&D and manufacturing in house. The results were a 900% increase in turnover and the positioning of Harry Winston as one of the leaders in this very competitive segment.

Prior to Harry Winston, Maximilian Büsser's love for high-end horology was strongly imprinted by his first employer, Jaeger-LeCoultre. During his seven years in the senior management team during the 1990s, JLC strongly increased its profile and multiplied its turnover by a factor of ten. Büsser's responsibilities at Jaeger-LeCoultre ranged from Product Management & Development to Sales & Marketing for Europe.

Maximilian graduated in 1991 with a Masters in Micro technology Engineering from the Swiss Federal Institute of Technology, Lausanne.