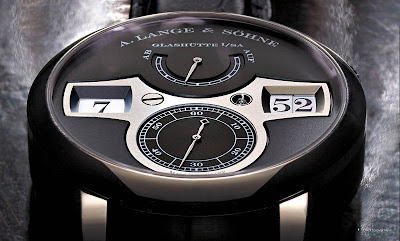 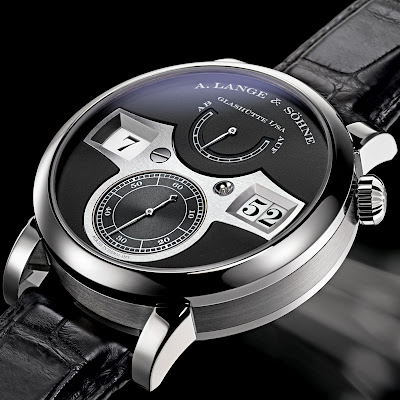 Often, it is a new face that ushers in new times. That was the case after the rift in Europe had healed and the LANGE 1 paved the way for the comeback of A. Lange & Söhne. Fifteen years ago, it enriched the realm of horology with a fundamentally new concept and unprecedented technical finesse. As a design icon, it has long conquered its place at the pinnacle of timelessness. Now, with a mechanical, precisely jumping hour and minute indication of singular clarity, Lange presents another milestone. So yet again, a new face ushers in the next era in timekeeping. Its name: Lange Zeitwerk. 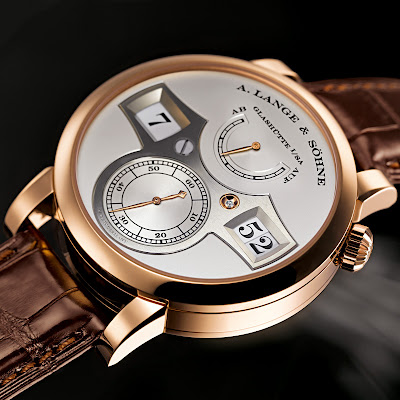 “I shut my eyes in order to see” – the creative maxim of famous French painter Paul Gauguin was adopted by Lange’s calibre engineers and designers as they resolved to explore uncharted territory and, from an unbiased viewpoint, devise a watch that would be evolutionary and progressive in every respect. Ultimately, progress is always a result of curiosity. The question at Lange was: “Can the principles of a mechanical watch and a modern time indication format be persuasively combined?” The answer is the first mechanical wristwatch with a truly eloquent jumping numeral display. It is a watch that reinterprets time in an era of change. It not only endows time with a new face but also defines a new direction in watchmaking. It is a timepiece that embodies the spirit of time and simultaneously transcends it. Indeed, it is a watch that lets its owner experience a totally new sense of time. 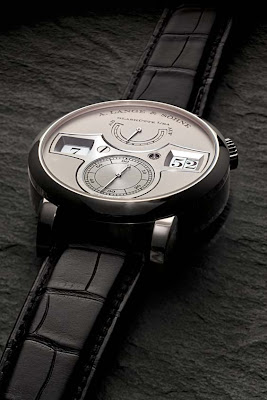 A fresh design concept underscores the paradigm shift: The German-silver time bridge unfolds its wings across the entire width of the dial to prominently frame the large numerals of the laterally aligned windows that present the hours and minutes. It extends down to encircle the subsidiary seconds dial as well, uniting all three levels of time measurement in a harmonious setting. With its easy-to-grip bevelled flutes, the knurled crown points up and away, predicting an upswing movement. And in the upper third of the dial, the continuous power-reserve indicator reliably tells the owner when it is time to re-energise the movement.

With its emblematic name, the Lange Zeitwerk is a watch that stands for uncompromising clarity. Thanks to the unparalleled size of its numerals, it tells the current time at even a cursory glance. With a whispered click and within fractions of a second, the minute display advances step by step until the watch initiates the big jump at the top of the hour. At this point, all three numeral discs switch forward simultaneously and instantaneously by exactly one unit. Here, timekeeping is elevated to the status of an event. The perfect moment for the showdown is at 11:59 – “high noon” in a widescreen format. The seconds hand embarks on its leisurely trajectory along the periphery of the subsidiary dial. Time seems to slow down as its course is deliberately observed. Thirty seconds to go. Mounting suspense. Then: ten… three, two, one – click – 12:00. One small step for a watch, but a giant leap for horology.

Beneath the extraordinary face, an equally revolutionary movement with a diameter of 33.6 millimeters fully occupies the space inside the 41.9-millimeter gold or platinum case.

The significant amount of energy required to simultaneously advance all three numeral discs once every hour is delivered by a newly developed barrel with an extra-strong mainspring. Its patented design literally turns the venerable wind/unwind principle upside down. Thus, the mainspring barrel bearing with the higher friction rating is involved when the watch is being wound, but the barrel wheel always turns in the minimized-friction bearing as the mainspring gradually relaxes. This makes more torque available for powering the watch as well as the ensemble of discs with the hour and minute numerals. 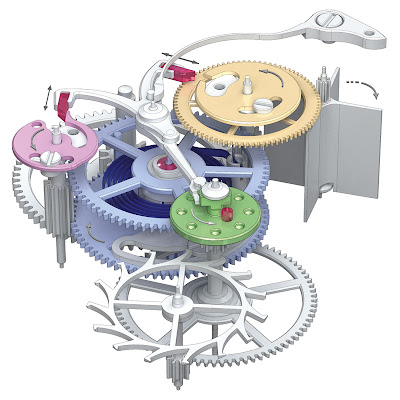 A constant-force escapement between the barrel wheel and the balance

A constant-force escapement, also patented, between the barrel wheel and the balance acts as a pacemaker for the jumping advance of the hours and minutes – in its compactness, the mechanism is quite likely unprecedented. The forces that occur when the numeral discs are accelerated and braked are far beyond the magnitude normally encountered in a movement. To absorb them, a fly governor was integrated in the mechanism. As it rotates, its vanes must displace air like a fan; it is this resistance that dissipates much of the energy and assures gentle switching.

At the same time, the constant-force escapement makes an important contribution to stabilizing the rate of the movement: across the entire 36-hour autonomy period, it drives the balance with nearly uniform power, regardless of the state of wind of the mainspring and unaffected by the energy-consuming switching cycles that take place in one-minute intervals. Incidentally, a balance wheel with eccentric poising weights and a hairspring manufactured in-house constitute the high-precision beat controller. 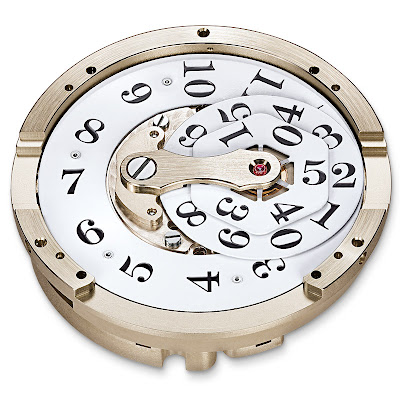 As progressive as this watch with the “A. Lange & Söhne” signature may be, it remains a staunch advocate of classic horological values. A glance through the sapphire-crystal caseback reveals the lavishly decorated L043.1 manufacture calibre that in addition to all its technical novelties of course also features a three-quarter plate, a hand-engraved balance cock, and screwed gold chatons – each element is an endearingly familiar and regal asset of every Lange watch.

With its graceful appearance and intrinsic values, the Lange Zeitwerk is not only a seminal timepiece, it also makes a strong statement about the personality and the style of its owner. It delivers a new experience in time – whether with eyes wide open or shut.

Related Posts on The Watchismo Times;
All Haute Horology Features