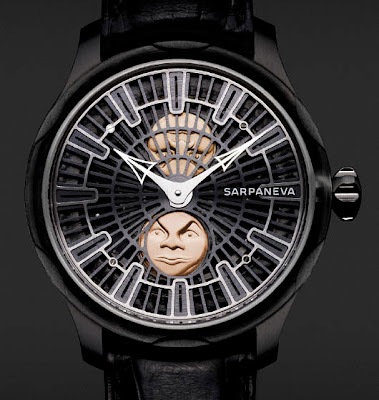 The red hued harvest Moon is something typical for Europe during this period of the year, and with the fall just having started in Europe, and Halloween only a few days away, it's a perfect time for Finnish watchmaker Stepan Sarpaneva to introduce his KORONA K3 RED MOON. It differs from all the other Sarpaneva models currently available, in that it sports a black DLC treated case combined with an 18-carat red gold moonphase indication, marking the first entrance of the use of red gold within the Sarpaneva collection in a dramatic combination. 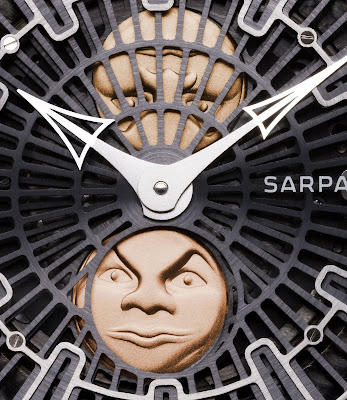 Stepan Sarpaneva: “People ask me where the idea came from for the KORONA dial, and it is a typical story for me. One night really late, walking home with my friends, the Moon was full and bright and shining on the circular, open worked and rusty iron gratings that surround the base of the trees on the street near my home. For some reason those details just popped into my head and stayed there. So, next day I started drawing and playing with the form; made a paper cutout of such an open-worked shape and began piling them one over the other, and those kinds of things. When I repeated this with metal parts, a friend of mine noticed that it also began to have something suggestive of the outward shimmering, the corona, around the Sun’s edge during a solar eclipse. That’s how the dial of the KORONA series was formed – just a passing glance at something that you normally see every single day – but somehow never really notice.” The Moonphase indication of the KORONA K3 grew from that departure point. “The open grates of the dial, despite the metalwork, also were suggestive of a forest, or a cloudy night-time sky, or outer space somehow. I realized that by putting the Moon under this dial it would allow you to actually ‘see’ the moon approaching its phases – this is something quite simple really, but which I personally have never seen in a wristwatch before. So said, so done, and the only question was how the Moon should look.”

Some writers have commented on the Moon’s somber face in the KORONA K3, but Stepan has other ideas about that.

Stepan: “You know, here in Finland, we are not a very extrovert kind of people. Maybe it has to do with our past history and having been taken over by the Swedes and then the Russians, but everyone here floats around with an aura of slight melancholy – I don’t know how else to describe it. So a smiling moon was out of the question, also because a Moonphase smiling at me all the time is too much like those yellow smiley faces they put in emails. So I decided to give the Moon an aura of aristocratic melancholy, with a bit of indecision as to whether he is basically happy or sad in nature. The expression of the Moon on the KORONA K3 just ‘is’ – same as the Finnish people here, and I think it fits the fall period perhaps the most of all.” 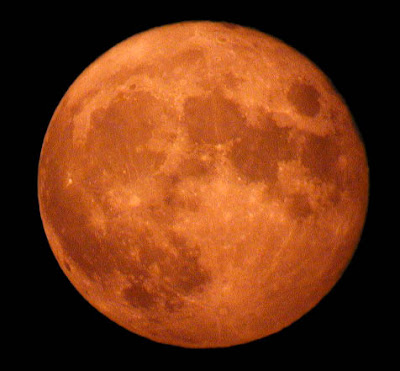 THE MOON IN RED

Creating the two deep hued, 18-carat red gold Moonphase discs for the KORONA K3 RED MOON itself is also a complicated task. The first dilemma concerns the dimensions, as the face is only 0.4mm thick yet has four levels of elevation. The first step requires creating a drawing six times the actual size, followed by cutting a rough model from plate stock, one piece corresponding to each level of elevation of the oversized model. These parts are then fixed together to form the model plate for the pantograph, which will mill the shapes into a small piece of copper the actual size of the Moonphase indicator. This copper version, which will serve later as an electrode, is then cleaned up and fine-tuned by a master engraver before the contours are electro etched 0.4mm deep into a steel pressing block, thus creating a negative image of the face. Last, the eyes are modeled by hand into the negative image and the whole is finished by a master engraver and diamond polished before undergoing hardening. This is followed by yet another polishing. Only now can the production of the Moonphase begin. The whole process from drawing to finished Moon takes a specialist company, also located in Finland, about two weeks to complete.

Sarpaneva Watches is Finland’s only mechanical watchmaking company, solely dedicated to the design and production of mechanical wristwatches. Located in the country’s capital Helsinki, the workshop was started in 2003 by Stepan Sarpaneva after years of training in both Finland and Switzerland that covered watchmaking in all its varieties, including hands on experience at several of Switzerland’s major houses with highly specialized work on complications. The Sarpaneva workshop’s philosophy towards watchmaking is firmly anchored within Stepan Sarpaneva’s deep desire to express himself in more ways then solely through the purely mechanical side of watchmaking. For this reason his firm’s foundation is to unite a long-term and timeless visual design concept together with that of high quality mechanical watchmaking. Unlike the majority of brands on the market today, this is a fundamental aspect that sets Sarpaneva Watches apart from the rest; here is one man with the ability to create novel wristwatch designs as well as unite them with the mechanical know-how of a master watchmaker.

See Also;
All Sarpaneva Posts at The Watchismo Times