In Opus 9, diamonds are not merely a decorative element, but the functional element of time telling. Teamed up for the 9th Opi is master watchmaker Jean-Marc Wiederecht and haute designer Eric Giroud.

Replacing the traditional watch hands and cyclical dial, time is displayed by two parallel diamond chains, for hours and minutes.

Vivid mandarin garnets are strategically positioned to indicate the hours and minutes.

Meticulously calibrated, each stone is perfectly set into the links, to ensure movement, while maintaining their brilliance. The chains are designed to maximize mobility while minimizing friction. 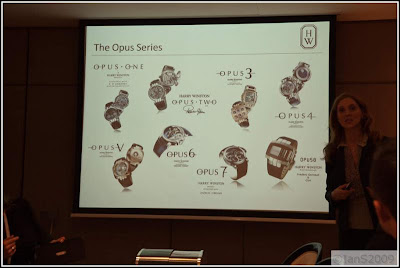 History of the Opus Series 1-8 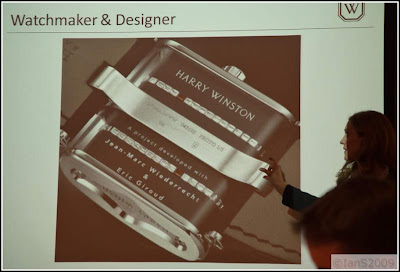 First presentation of the dial 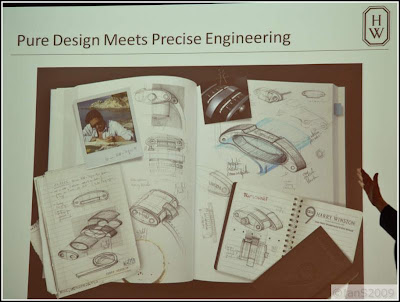 Presentation of the sketches and renderings 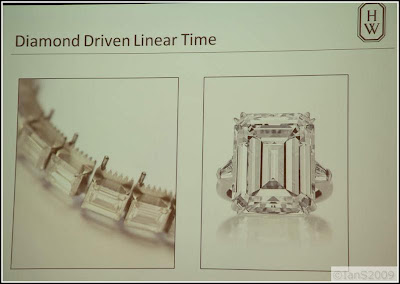 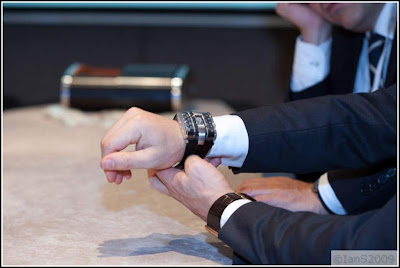 Opus 9 on the wrist 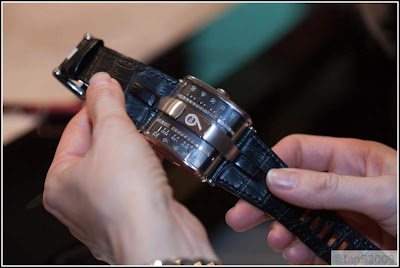 First public viewing for the watch 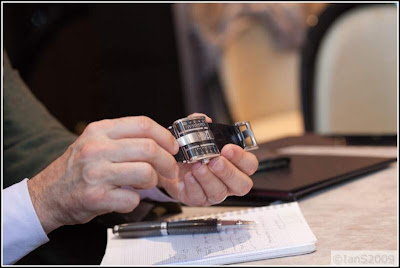 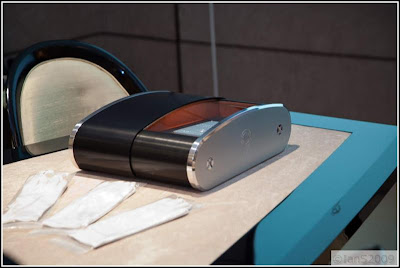 Haute Steampunk! Attack of the Horological Machine No.2 An exciting evening out on the town for the reclusive Watchismo Times! I had the honor of meeting Maximilian Büsser and his new child, the Horological Machine No.2! And for some strange reason, Max trusted me enough to hold his bolted baby even though I almost dropped it into the Bolognese sauce...

Personally, I think he just pulled it out of an antique alien submarine control panel and put a strap on it. After decades learning and conforming to the rules of corporate watchmaking, Maximilian Büsser broke the chains and started a rebellion - a rebellion called MB&F.

MB&F is an artistic and micro-engineering concept laboratory in which changing collectives of independent horological professionals are assembled each year to design and craft radical Horological Machines.

The ramifications of these audacious projects are profound. By respecting tradition without being shackled by it, MB&F acts as a catalyst in fusing traditional high-quality watchmaking with cutting-edge technology and avant-garde three-dimensional kinetic sculpture. Each of HM2's twin portholes allows the viewer a different perspective of time. On the right, the Jumping Hours and Concentric Retrograde Minutes reveals time up close and 'now', while the Retrograde Date and Bi-Hemisphere Moon Phase on the left dial allows the viewer to take a step back from immediacy and relax. Horological Machine No.2 (HM2) is a holistically conceived and engineered three-dimensional timekeeping machine for the wrist. The functions and indications were specifically conceived to tailor to the strengths of HM2's chief watchmaker, Jean-Marc Wiederrecht. The bespoke architecture of the highly technical movement was developed to both fit and complement the radical form of the modular case. HM2 is the world's first mechanical movement offering: Instantaneous Jump Hour, Concentric Retrograde Minutes, Retrograde Date, Bi-Hemisphere Moon Phase and Automatic Winding.
With over 450 components making up its case and movement HM2 is an incredible sophisticated machine; however, its complexity has been engineered for simple and trouble free functionality.

The realisation of HM2’s complex case shape - with its architectural volume, bold flying buttresses, bolted portholes and sliding crown guard - was only made possible by using an innovative modular approach: a method inspired by the Meccano sets (similar to Erector sets) of Maximilian Büsser's childhood.

Horological Machine No.2 is full of dynamic tension between apparently incongruous elements. Tension between cutting-edge technology and sculptural art, matte textures and mirror-polishes, high-tech alloys and precious metals and tension between traditional watchmaking and 21st century micro-engineering. This vibrant tension is amplified by the interplay of light and colour off the varied finishes, textures and shapes, and gives the machine its pulsing vitality. Inspiration and Realization: MB&F is first and foremost about people and the key person behind Horological Machine No.2 is Jean-Marc Wiederrecht. It was 9 years ago, in Maximilian Büsser's former position as Managing Director of Harry Winston Timepieces, that Büsser first began working with Wiederrecht and found him to be imaginative, inventive and sharing in the same human values. Wiederrecht and his company Agenhor are world leaders in Retrograde and Jumping Hour mechanisms and Büsser conceived HM2's functions specifically to play to these strengths.

The case, with its flying buttresses, bolted portholes and sliding crown guard, was so complex - over 100 components go into its construction alone - that it could only be developed with an innovative modular method inspired by the Meccano sets of Maximilian Büsser's childhood. And in line with best engineering principles, this modularity also simplifies future refurbishment of the case should it ever be necessary. Architecture: The principal feature of Horological Machine No.2 is the holistic symbiosis between the three dimensional architecture of both the case and the movement. The sheer complexity of the case design necessitated a modular approach to construction. More than 100 components go into the assembly of the case alone - that is more parts than make up many complete movements! While extremely complex to fabricate, this bolted-not-welded engineering allows maximum flexibility in design and enables a rich variety of materials and finishes to be used. Technical Innovations: The principle technical challenge in developing the movement was ensuring that the jumping hour functioned both instantaneously and simultaneously when the retrograde minute flies back from 60 to 0. And not only instantaneously, but also without using excessive energy. The usual method of activating Jumping Hour indications is to store energy in the minutes before the change to power the jump; however, while this energy is being accumulated it takes power from the balance causing it to loose amplitude - an effect detrimental to time-keeping precision. Wiederrecht's solution was as brilliant as it was simple: he designed a ingenious mechanism so that when the minutes fly back, a snail on the minute mechanism hits the hour star causing the hour to jump. The hour jumps instantaneously with the minutes because it is triggered by the minutes and, as the jump is powered by the energy of the minutes flying back, it has virtually no effect on the amplitude of the balance. The complication has another very special feature. Specific gears in HM2's movement are manufactured to extremely high precision using Mimotec's UV-LIGA technology. These gears mesh together with a virtually a no-tolerance/no-play engagement. Normally, gears interacting this tightly would bind; however, Wiederrecht's patented asymmetrical-split-tooth gear design ensures this does not occur. The high precision of this gearing enables very accurate time-setting and offers high reliability.

To maximise the efficiency of MB&F's already iconic double Hakken automatic rotor, one of the 22kt gold blades was machined down to a razor sharp edge of just 0.2mm - a dimension which pushed the very limits of micro-machining.

The innovative sliding crown guard clearly indicates its position (in or out) and facilitates access to time-setting and quick date correcting.

And now for some candid shots of the new brood. (photographed by and courtesy of Felipe Jordão, the independent horology moderator at Timezone.com - all his photos can be seen here-->Link What watch do I wear to such an event?
Well, my cuffbusting vintage Desotos Sure, I feel guilty looking at the HM2 in a very private moment. But I just can't help myself, it's a damn nice looking watch!

Within a week of being publicly exposed in full-frontal glory, the MB&F "Horological Machine N°2" can only be seen with these advance elemental photographs. Showing the crown (with the iconic HM2 "battle axe" rotor design on it), a portion of one display and at least two indications, and what appears to be some sort of bad-ass futuristic motorcycle engine! We shall see...stay tuned.

The case alone is made up of 102 different coponents, setting itself as one of the most, if not THE most complex watch cases ever made. Max mentioned to me that the case construction is inspired by a game he used to play as a kid… called Meccano, where parts are bolted together (similar to Erector sets). Perhaps a grip for your thumb to adjust the crown?