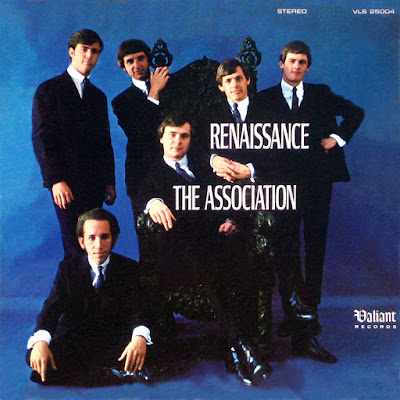 The Association - 1967
Renaissance was a difficult album for the Association to record. Coming in the wake of a serious hit album (And Then...Along Comes the Association) and two huge hit singles ("Along Comes Mary," "Cherish") and at a time when the group was experiencing more bookings than its members had ever dreamed possible, Renaissance was rushed out under pressure from the band's label. Alas, Renaissance bore little resemblance to its predecessor. For starters, the Association had lost the services of producer Curt Boettcher, who was the architect of the earlier album's extraordinary sound. Additionally, Renaissance was comprised entirely of original material, much of which had been written while the group was touring. These songs were competent and showed some flashes of inspiration but, apart from "Come to Me," nothing here offered anything even remotely as catchy as either of the band's two previous singles. With Association rhythm guitarist Jim Yester's brother Jerry Yester producing, Renaissance has a more stripped-down, conventional folk-rock feel. Apart from lead guitarist Gary Alexander and wind player Terry Kirkman, none of the other members played on this album, but Alexander is a delight, mixing melodic folk-rock picking and strumming, throwing in a few high-energy licks on one or two numbers, and even using a koto for the album's single, "Pandora's Golden Heebie Jeebies." The latter, despite having a grotesque title when following up a single like "Cherish," is a prize piece of pop psychedelia, all gorgeous harmonies and spaced-out sensibilities backed by a bracing beat. Renaissance wasn't a bad album, but was a more routine, predictable recording than its predecessor and, without a hit single to help push sales, it never reached audiences in remotely the same numbers. 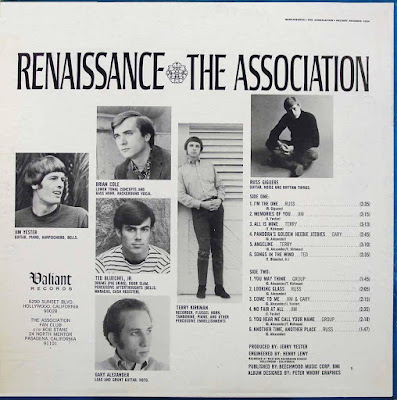