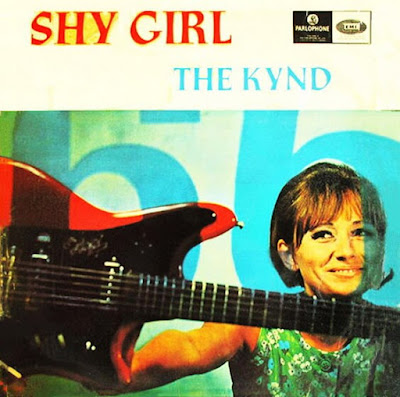 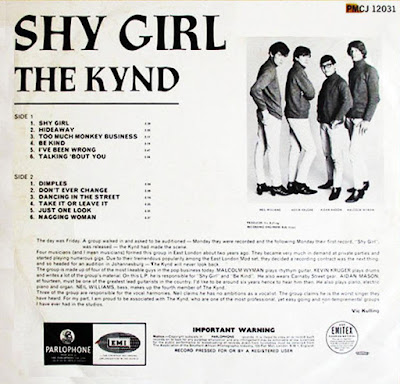 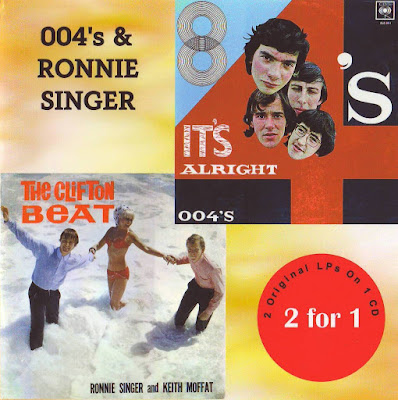 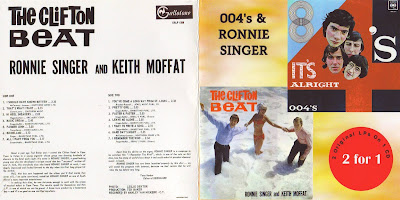 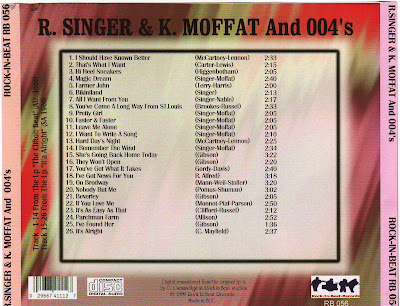 The Bats - All I Got-Ahabby Little Hut 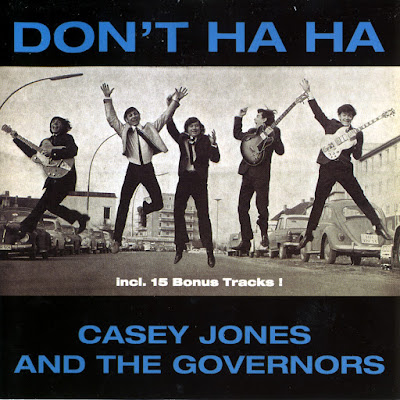 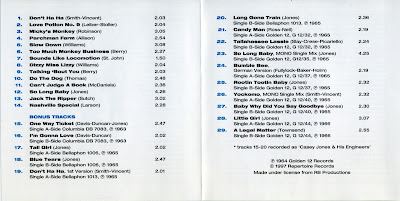 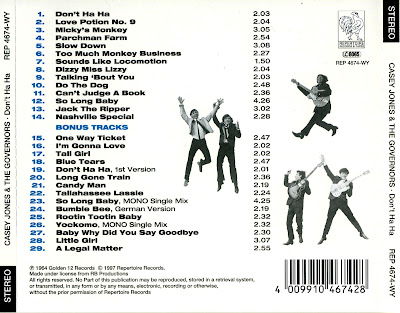 Dickie Loader & The Blue Jeans - My Babe/Exclusviely Yours 1963 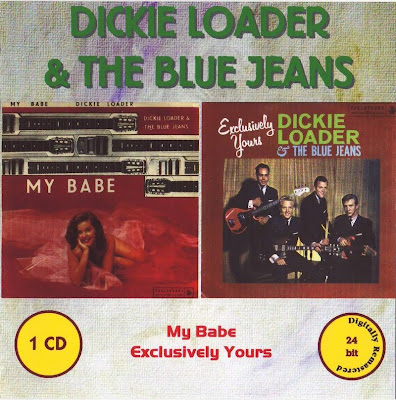 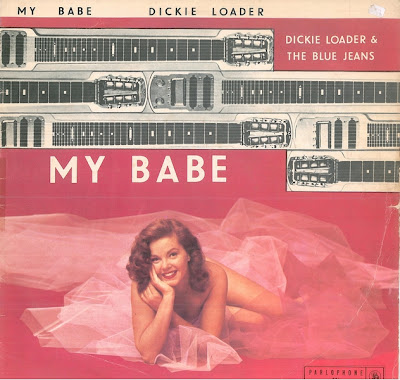 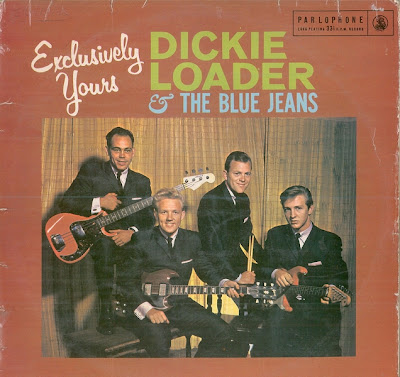 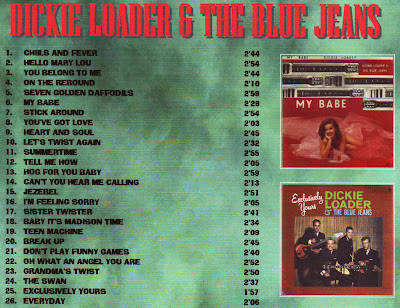 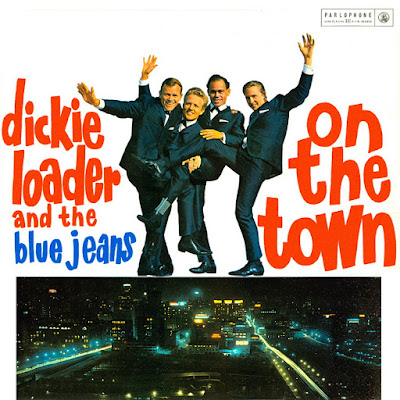 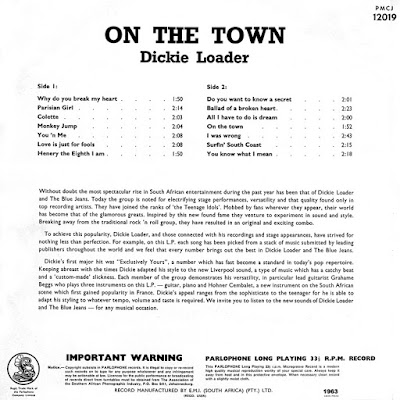 'The Preachers are one of the seminal obscure bands of the mid-'60s British rock/pop scene, with links to the family trees of the Rolling Stones, Bill Wyman and the Herd. However, they are also one of the last-heard, with only a solitary 1965 single having previously gained a release. Nod, Shake & Stomp finally changes all that, unearthing two previously unreleased studio demos from 1964 plus no less than fourteen live tracks that were recorded in the same year. The result is an album of vintage, swaggering British teenage beat/R&B. Nothing less than the full history of the Preachers, this release features two original members of the Herd in former Rolling Stones drummer Tony Chapman and singer Terry Clark, as well as the astonishing young guitarist Steve Carroll, recorded just weeks before his tragically early death in a car crash (he was replaced by Peter Frampton). The album includes an insert featuring lengthy liner notes from Bill Wyman that document his journey from pre-Preachers outfit the Cliftons to the Stones, with the aid of some great, previously unpublished photos and gig posters from Bill's personal collection of memorabilia. This important slice of British beat/R&B history is a vinyl-only release of 1000 numbered copies on 190gm vinyl.
Vinyl, LP, Album, Limited Edition, Numbered
Tenth Planet ‎– TP053 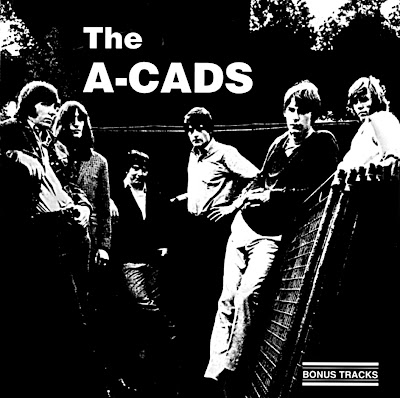 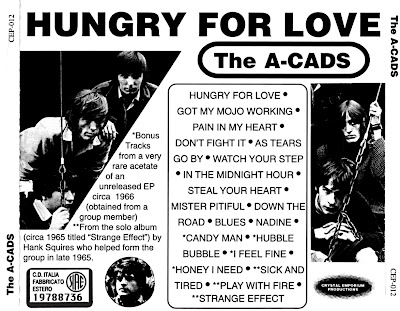 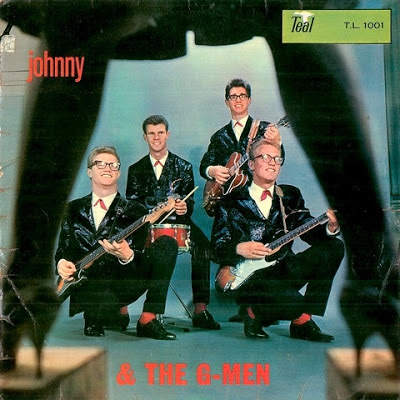 John Kongos had been the leader behind Johnny Kongos & the G-Men, a prolific beat group from Johannesburg, South Africa that frequently appeared on that country's charts during the first half of the '60s. In 1966, Kongos and a number of his associates relocated to London and cut a 1967 single as Floribunda Rose for Piccadilly. Floribunda Rose eventually morphed into Scrugg, a psychedelic pop band that released a trio of singles for Pye prior to their 1969 breakup. "I Wish I Was Five," a 1968 B-side, gained the most attention. Upon Scrugg's split, Kongos went solo and released a handful of records, including the albums Confusions About a Goldfish, John Kongos, and Tokoloshe Man. The 1971 single "He's Gonna Step on You Again" registered on the charts in the U.K. and the U.S. Sporadic reissues of Kongos' work appeared during the '90s, and in 2002, Castle released Lavender Popcorn: 1966-1969, which combined Scrugg and Floribunda Rose material (both familiar and previously unreleased) with Confusions About a Goldfish.
http://www.rock.co.za/files/jkongos_index.htm
http://www.garagehangover.com/acads/
Johnny And The G-Men, TEAL TL 1001 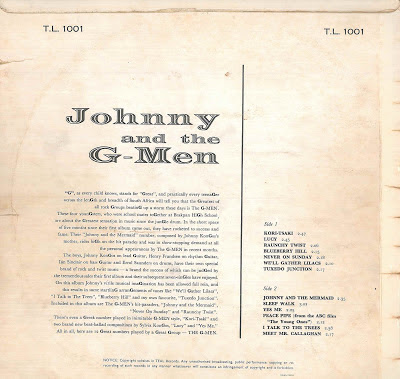 Johnny Kongos - This Is Johnny 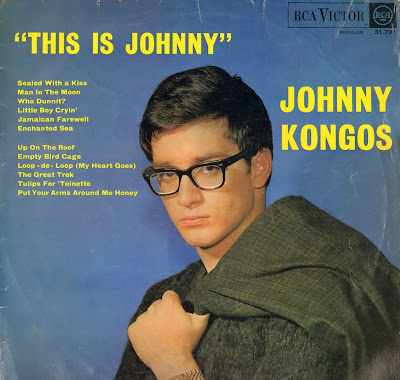 Having had success in South Africa in the early 1960s with his band Johnny and the G-Men, as well as a solo artist, Kongos went to UK to pursue his musical career. His first UK based group, Floribunda Rose, formed in April 1967, comprised the British musicians, Pete Clifford (guitar) (born Peter William Frederick Clifford, 10 May 1943, Whetstone, North London) and Jack Russell (bass, vocals) (born 29 April 1944, Caerleon, South Wales), who had come to South Africa in June 1965 with The 004; drummer Nick 'Doc' Dokter (born 24 July 1945, Kampen, Overijssel, Holland), a latter day member of 004; and the Cyprus born keyboard player Chris Demetriou from John E Sharpe and the Squires. After one single, "Linda Loves Linda", Clifford returned to South Africa to join The Bats and Dokter moved to Canada and worked with Five Man Cargo. Drummer Henry Spinetti joined and the remaining members recorded three singles as Scrugg.
After 18 months of gigging in Britain and Europe with his bands Floribunda Rose and Scrugg, and five singles later, he released his first solo album, Confusions About a Goldfish (1970), on the Dawn record label.
He then concentrated on songwriting, and began to have major success in Germany and other European countries (No 1 and Top 10 hits). He then moved to Fly Records with whom he had two hit singles – "He's Gonna Step On You Again" (UK No. 4, May 1971;[1] U.S. Billboard Hot 100 No. 70) and "Tokoloshe Man" (UK No. 4, November 1971).[1] His second album Kongos made the Top 30 of the UK Albums Chart, but subsequent singles, "Great White Lady" (1972), "Ride the Lightning" (1975) and "Higher than God's Hat" (1975), did not chart.[1] "Tomorrow I'll Go", which appeared on Kongos, was covered by New Zealand band The Human Instinct on their 1970 album Stoned Guitar, while "Ride The Lightning" (1975) was covered by Sylvie Vartan as "Qu'est-ce qui fait pleurer les blondes?" in France and was Number 1 on that chart for several weeks in 1976.
"He's Gonna Step On You Again" is cited in the Guinness Book of Records as being the first song to ever use a sample.
Kongos continued to work in his own London studio as a record producer, sound engineer, TV jingle and theme music composer, and songwriter, as well as handling the programming of the Fairlight CMI synthesizer on Def Leppard's 1983 album, Pyromania.
He gained notoriety with a new musical generation in 1990, when Madchester pioneers Happy Mondays reworked "He's Gonna Step On You Again" into their baggy era defining hit "Step On", which reached number 5 in the UK Singles Chart.[2] In the same year they also covered his "Tokoloshe Man", for the compilation album, Rubáiyát.
http://www.rock.co.za/files/jkongos_index.htm
http://en.wikipedia.org/wiki/John_Kongos
http://www.johnkongos.com/
This Is Johnny, RCA Victor 31,791 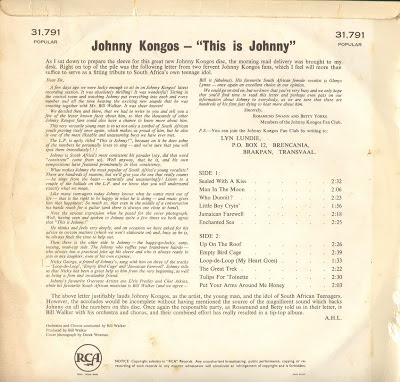