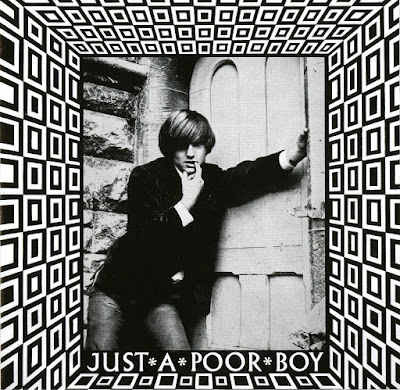 The dozen tracks on obscure Australian rocker Mike Furber's 1967 LP were, as was often the case for the time, culled from a variety of sources, including two 1966 singles that saw some Australian regional chart action, "Just a Poor Boy" and "You Stole My Love." It's fair British Invasion-styled rock, though it doesn't stop with just imitating overseas trends, as most of the songs are themselves covers of British and American tunes. Some of the British ones covered, in fact, are quite obscure: "You Stole My Love" was first done (and handled much better, to be honest) by Graham Gouldman's mid-'60s band the Mockingbirds, while "Stop" was an early Moody Blues original. Furber was an okay but uneven singer, and in fact sounds rather horribly off-pitch on "Stop!" He also seemed to favor fairly tough R&B material that was actually a little too tough for his ordinary range, rather in the way British singers like Neil Christian and Dave Berry recorded some hard R&B that was a little at odds with their mild, pop-oriented voices. The moody, tuneful Merseybeat-ish beat ballad "You're Back Again" and the similar (but harder rocking) "Love Talk" are the standouts, both because they're not overly familiar songs and because they're more suited toward Furber's voice than the soul-R&B stuff. [While it's good to have a CD reissue of this rare album available, as packaging goes, this makes even the skimpiest bootleg look good. Not only are there no liner notes or original release labels or dates; there are not even any song titles listed. (There are, however, two photos, each of them printed three times in various places on the cover and inner sleeve.)
******** 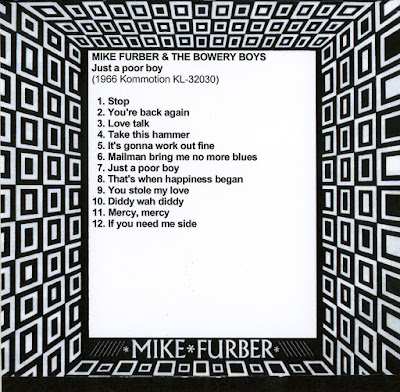 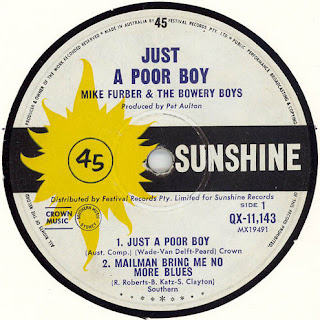 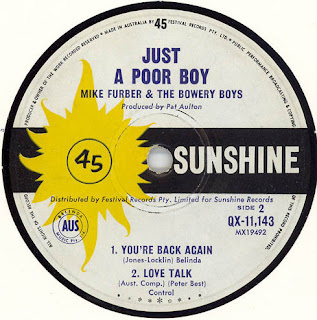 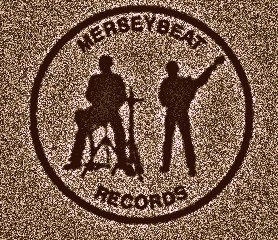 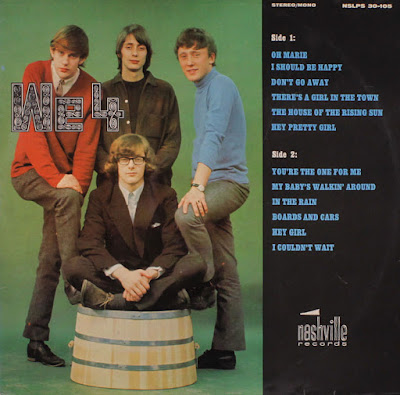 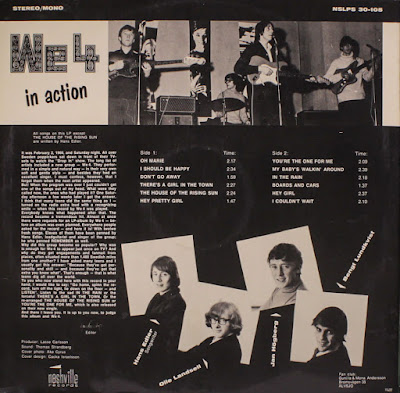 The Beatles (aka Beat Brothers) &Tony Sheridan - Meet The Beat 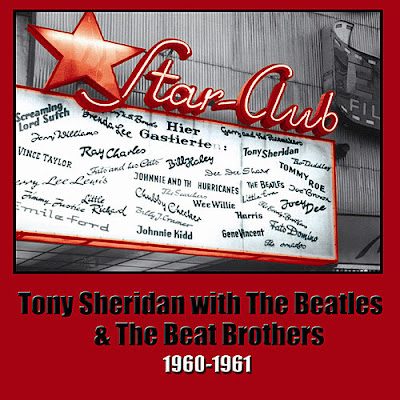 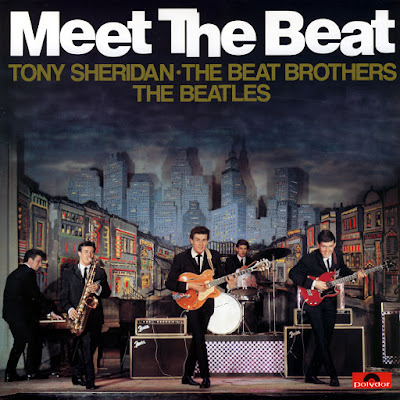 Guitar band formed in Liverpool, UK. Former line-up comprised Paul McCartney (guitar, vocals), John Lennon (guitar, vocals), George Harrison (guitar, vocals), Stuart Sutcliffe (bass) and Pete Best (drums).
Known as one of Tony Sheridan's backup bands in Hamburg, Germany and performers on his single "My Bonnie" and on his debut album with the same title.
In 1960 Stuart Sutcliffe left the band before they achieved their success and was replaced by Paul McCartney. In the spring of 1962, Sutcliffe died from a cerebral hemorrhage.
In 1962 the drummer Pete Best was replaced by Richard Starkey (aka Ringo Starr) 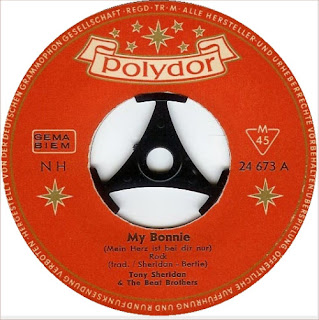 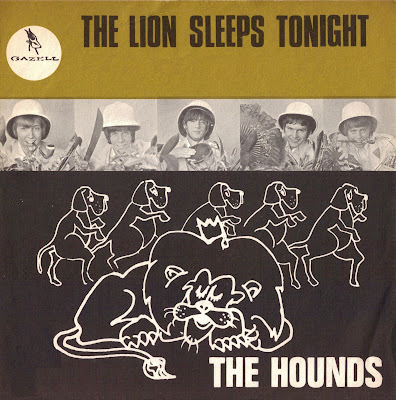 The Hounds -- also sometimes referred to as "the Hound" -- were a Swedish rock band of the mid-'60s, organized in 1965 by 19-year-old guitarist and singer Henrik Salander and his friend, singer Jan Ahlén. The group -- whose other members included Lars Wallander (guitar), Jan Bråthe (bass/vocals), and Janne Önnerud (drums) -- had a decided orientation toward pop/rock, with an emphasis on harmony vocals and mainstream fare. Their first major hit was a sung version of "Exodus" in 1966, which reached number three in Sweden; they charted the following year with a cover of Brian Hyland's hit "Sealed with a Kiss" at number two, and hit the number one spot the same year with their version of the Tokens' hit "The Lion Sleeps Tonight." They later hit number six with their version of the Chad & Jeremy hit "A Summer Song," and closed out 1967 with a number four placement on "I'll Take You Where the Music's Playing." Their only chart record of 1968 was a number four hit for "The Gipsy Cried." But they also covered topical material such as Bob Dylan's "The Times They Are A-Changin'," and seemed to have had more strings to their bow than the soft pop of their singles. Additionally, they did record some excellent originals, mostly written or co-written by Salander. And they even brushed up against the pop side of freakbeat with a crunchy, guitar and brass-driven rendition of "Hi-Ho Silver Lining" that could have easily charted anywhere in the world.
Based on the recorded evidence, The Hounds were at least as solid a group as, say, the Hep Stars or the Hootenanny Singers. With their emphasis on covers, they were roughly Sweden's equivalent to the Marmalade or the Tremeloes. But they never pursued music as long as any of those other groups -- as it turned out, The Hounds' key creative member had other, bigger fish to fry. The quintet broke up in 1968 when Henrik Salander decided to pursue higher education full-time, a move that may have cost music some pleasant pop sounds, but otherwise seems to have benefited not only Sweden but the entire world. In the decades since, Salander has pursued a long career in international affairs as a respected diplomat, and among his other activities, he has headed the Disarmament and Non-Proliferation Office in the Swedish Ministry of Foreign Affairs, and was the Secretary-General of the Weapons of Mass Destruction Commission. His interest in music didn't desert him, however -- he once delivered a report on nuclear proliferation to the United Nations sung to the Beatles tune "Yesterday." As for The Hounds, they reportedly have reunited on occasion for one-off performances.
The Hounds - The Lion Sleeps Tonight: Best of the Hounds
1966-1968
(Stockholm Universal 2002) 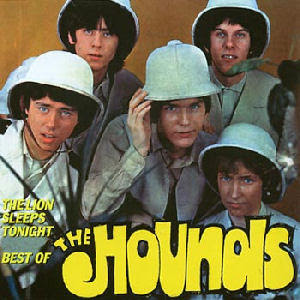 Chances are that the Hounds (also referred to as "the Hound" in some accounts) are an unknown quantity to most listeners, except for those who spent time in Sweden in second half of the 1960s. Fact is, though, that they're well worth hearing as a light pop/rock outfit with some less often glimpsed, slightly heavier sides -- they even managed to dip a toe into what would later be called "freakbeat" near the end of their history. the Hounds never released an album, but they enjoyed enough charting singles in Sweden that this CD could qualify as a greatest-hits as well as a best-of collection, representing everything they ever succeeded with and other things that didn't sell as well (but arguably should have). From harmony vocal pop/rock ("Exodus," "Sealed with a Kiss") to folk-rock ("The Times They Are A-Changin'") to some solid originals and a little venture into psychedelic pop ("Hi-Ho Silver Lining"), they do well by the music and the listener across 18 songs. Among many other virtues, the bandmembers seem to have understood the notion of less being more, which makes their harmony-driven cover of Dylan's "The Times They Are A-Changin'" a lot more successful than, say, the Hollies' rendition. In all, this is an enjoyable if not earth-shattering or revelatory overview of a band with lots of talent, some ambition, and good to excellent results in its short three-year history.
1. The lion sleeps tonight.
2. Sealed with a kiss.
3. The Gypsy cried.
4. Exodus.
5. I'll take you where the music's playin'.
6. A summer song.
7. Very last day.
8. Never try to catch the sun.
9. Old man in New York.
10. The times they are a changin'.
11. I can't grow peaches on a cherry tree.
12. If time stood still.
13. A day in a life of a fool.
14. What's he got that I ain't got.
15. The office girl.
16. Devoted to you.
17. Please, hear my symphony.
18. Hi-ho silver lining
***
Source: allmusic-wingsofdream.blogspot.com
4 Comments+ Sharelabels (5)Flag
All60'sBeatPopSwedenThe Hounds