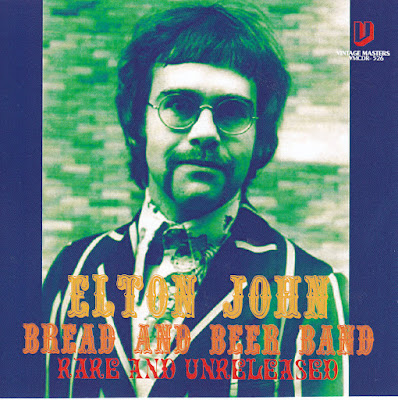 In early 1969, Elton John  (then known by his given name Reg Dwight)  and friends formed a band known as The Bread And Beer band :
Bernie Calvert - bass
Caleb Quaye - guitar
Reg Dwight (Elton John) - piano
Roger Pope - drums
Lennox - percussion
Rolfo - percussion
http://www.eltonjohnitaly.com/bread&beerband.html
The group recorded a single and an album in Feb. 1969, which was produced by Chris Thomas at the legendary EMI Studios at Abbey Road. The single was released in the UK only, in Feb. of '69. The album was planned for June of 1969, but cancelled, and the band put out on their own label in a handmade sleeve.
" Way back in the sixties, before there was an Empty Sky or even an Elton John, pianist Reginald Dwight was enlisted by aspiring producer Tony King to join what the latter envisioned as a studio band along the lines of the great Motown sections of the past. It wasn't to be a touring, full-time outfit, but a recording group and studio back-up unit that could be revised and shifted to fit the needs of each individual project that was undertaken. King, who produced the group along with veteran Chris Thomas (Procol Harum, Jethro Tull), also enlisted Hollies bassist Bernie Calvert, a pair of Jamaican conga and cowbell men and present-day Elton John Band members Roger Pope (drums) and Caleb Quaye (guitar). The group was dubbed the Bread and Beer Band, and with good reason.
"We used to go down to the pub in the afternoon, have a few beers and go back to the studio in the evening. Then we'd turn down all the lights at Abbey Road and get all moody," recalled Tony King. "The Beatles had been using lots of colored lights while they were recording - we thought it was terribly avant-garde - so we used to steal them and use them during our sessions."
King, who now serves as general manager for Elton John's and manager John Reid's Rocket Records, describes the group's first recorded effort as a satirical 12-bar blues treatment of the theme to the "Dick Barden Show," [should be "Dick Barton Show"] the BBC's rough equivalent to our own Dick Tracy. It was released as a single. "We got some nice reviews and people said it was interesting in an adventurous sort of way." It didn't sell.
Nevertheless, Bread and Beer were sufficiently motivated to record an album, a concept sort of thing that featured reworked arrangements of popular songs of the day with a few standards tossed in. Among the songs that Reginald and company tampered with were Sam the Sham's Wooly Bully, Donovan's Mellow Yellow and even a humorous arrangement of the Zorba The Greek movie theme. Fortunately or unfortunately, it was never released."
According to King, the tapes are now the property of John Reid and only one disc, an acetate presented to Elton on his last birthday, is in existence. "When I played it for Elton on his birthday," said King, "I thought It would be God-awful. We were surprised to find that it was half-decent. I think that if it were lousy, we'd all own up to it, because it's only between us anyway. But everybody who played on it still likes it." There is no way, however, that the album will ever be released. " 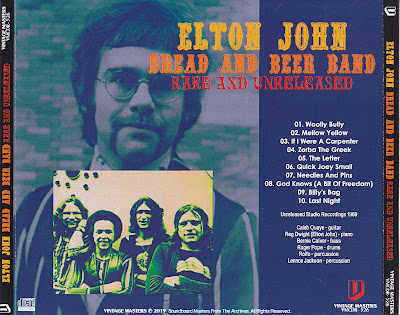 Valuable studio recordings of “Beared and Bear Band”, which had been registered in 69, before Elton John debuted as a singer-songwriter! At this point in time he is still playing the cover of the hit pops of the time without thorough vocals and playing the piano, but this recording is a valuable excavated sound source that has been stored without being officially released. It is a collector’s item that has attracted attention as a 60’s rare sound source that can be said to be the origin of Elton John!