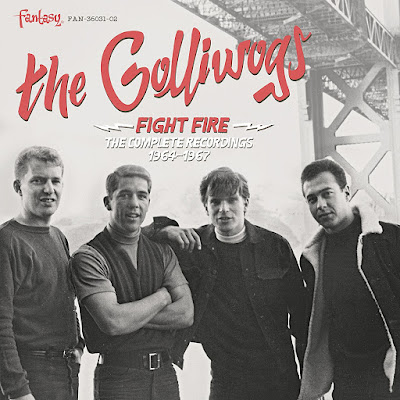 What's in a name? More than any other band, the Golliwogs suggest a group's handle really can make a difference, since they labored in obscurity for three years before achieving massive success months after the quartet changed its name to Creedence Clearwater Revival. The Golliwogs' story began when singer and guitarist John Fogerty met drummer Doug Clifford while they were attending high school in El Cerrito, California; they discovered they shared a passion for Little Richard and Fats Domino, and decided to form a band to play New Orleans-style rock & roll. After several months, Fogerty and Clifford recruited Stu Cook, another El Cerrito student, to handle piano and bass guitar with their combo. Initially called the Blue Velvets, the group gave star billing to John's older brother when he came aboard as lead vocalist and guitarist. In 1961, Tommy Fogerty & the Blue Velvets released a pair of singles for the Oakland, California-based label Orchestra Records, but neither was a success.
In 1963, Fantasy Records, a jazz label based out of San Francisco, enjoyed a surprise hit single with Vince Guaraldi's piano tune "Cast Your Fate to the Wind," and when a local television station aired a documentary about the record's success, the Blue Velvets approached Fantasy in hopes of landing a new record deal. Fantasy co-owner Max Weiss saw potential in the group and signed them up, but believed they needed a new name, and after toying with the Visions, Weiss and his associates declared the band would now be known as the Golliwogs. The Golliwogs released their first single on Fantasy, "Don't Tell Me No Lies" b/w "Little Girl (Does Your Momma Know)," in November 1964; the disc made no impression on the charts, and while the Golliwogs would cut six other singles for Fantasy and their affiliated Scorpio label (including an early version of CCR's "Walking on the Water"), the only chart success the band saw was with their song "Brown Eyed Girl" (an original, not the venerable Van Morrison number), which rose to number ten on Billboard's "Regional Breakout" chart for Miami, Florida.
Nuggets: Original Artyfacts from the First Psychedelic Era 1965-1968 While Tommy Fogerty co-wrote and sang many of the Golliwogs' early singles, as time passed his brother John became more of a presence in the group, taking a larger role in the recording process and even producing their final sessions. The final Golliwogs single, "Porterville" b/w "Call It Pretending," appeared in late 1967, and the band was offered a new deal with Fantasy under the condition they once again change their name (no great hardship, as they were never very enthusiastic about being called the Golliwogs anyway). The group came up with Creedence Clearwater Revival, and their debut album (which included new versions of both "Porterville" and "Walking on the Water") appeared in July 1968; CCR's versions of "Suzie Q" and "I Put a Spell on You" were both solid hits, and at long last the quartet was a success. In 1974, after Creedence Clearwater Revival broke up, Fantasy released a collection of Golliwogs material under the name Pre-Creedence, and in 1998 their song "Fight Fire" got some belated respect when it appeared on the celebrated garage rock box set Nuggets: Original Artyfacts from the First Psychedelic Era 1965-1968. Golliwogs tracks were also part of the complete Creedence Clearwater Revival box set released in 2001, and Fantasy finally issued a definitive collection of the group's body of work, Fight Fire: The Complete Recordings 1964-1967, in 2017. Before Creedence Clearwater Revival were the chart-topping, era-defining band they went on to be, John Fogerty, his brother Tom, Stu Cook, and Doug Clifford had been struggling to make an impact for almost a decade. After playing in various bands that didn't make much of a splash, their mid-'60s incarnation as the Golliwogs found the group kicking out some seriously good garage rock, snappy Beat group knock-offs, and quite a few songs that pointed towards CCR. The band started off in 1964 with Tom and John sharing lead vocals on songs like "I Only Met You Just an Hour Ago" and "You Got Nothing on Me," amiable Beatles-inspired songs that make up for their lack of originality with a healthy dose of teenage energy and occasionally strike gold, like on the moody "Don't Tell Me No Lies." Once John took over on vocals and asserted his songwriting skills, things started to get more interesting. In 1965/1966 they started working on their own sound and in the process made some great garage rock. "Brown-Eyed Girl" is a dark, rumbling, minor-key rocker that Them would have been glad to have in their set; "Fight Fire" is a monster rocker with some fiery guitar riffing, and the garage ballad/rocker hybrid "Try Try Try" would have been a highlight of a Nuggets comp. By the time late 1966 hit, the band was starting to tap into something unique and that fall's single "Walking on the Water" is a weird, one-chord song where the transition to the dark blues of CCR really begins. It's in the power of John's vocal, the clipped guitar playing, and the brutal drive of the rhythm section. From that point on the band went from a traditional garage band to something a little fuller and more expressive. The songs they recorded in 1967 show a new level of confidence and richness, with John coming into his own as a songwriter and the band starting to capture the tightly wound toughness they became known for. Tracks like the soulful "Tell Me" or the rollicking "Porterville" (which CCR ended up re-doing later) basically sound like Creedence, and good Creedence at that. The Golliwogs work has been compiled before, on LP in the '70s and as part of a CCR box set in 2001, but this is the first time their complete works have been showcased as a whole under their own name. It may have been down to legal issues or perceived lack of interest that it hasn't happened until now, but the important thing is that it has finally happened and fans of CCR, John Fogerty, and good old-fashioned garage rock can be glad of it.
****
Source: allmusic-wingsofdream.blogspot.com
4 Comments+ Sharelabels (6)Flag
All"Pre..."60'sCreedence Clearwater RevivalFogertyThe GolliwogsUS