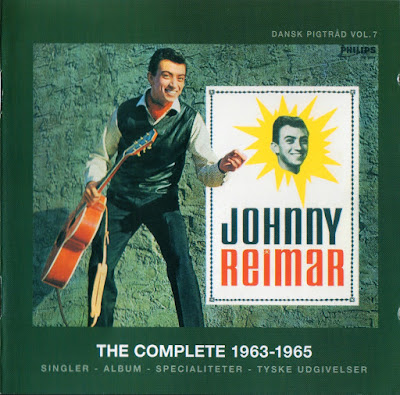 Johnny Reimar – The Complete 1963 – 1965
This is volume 7 in the great series “Dansk Pigtrеd”. Johnny Reimar was, with or without his equally famous backing-group The Scarlets, one of Denmarks most famous and successful artists in the sixties. He originally started out in The Clifters before joining The Scarletts. Like most artists of that era he did mostly cover-songs along with some of his own tunes. He has also had a very successful solo-career as a perfomer and an actor. The biographies are taken from danskefilm.dk and tinpan.fortunecity.com/mccartney/95/dksca.htm. They have been (poorly) translated into English by me.
The Scarlets were formed in Copenhagen in mid 1963 as a backing-group for Johnny Reimar, who had just left the Clifters. The members were: John Friis (el-b, vo) Kaj Christensen (p, org, vo) Steen Larsen (lead-g) Jan Pedersen (dm).
The Scarlets made their debut at Geels Kro, 20th July 1963. Scarlets quickly became more than just a backing-froup, and had two parallel carreers both on stage and on album: The Scarlets with or without Reimar. Scarlet played rocknroll inspired by Johnny & The Hurricans, which can be heard on their first recording “Bondeorgelet”, which served as the opening-vignette to the radioprogram “Musik for Teenagere”. The B-side “Prinsesse Toben” was a huge hit pе “Ti Vi Ka Li” in September 1963. Johnny Reimar & The Scarlets were a popular liveband that toured extensively in Denmark and Sweden. On a lot of the recordings Reimar used Bertrand Bechs Orkester as his backing-group. Scarlets were the first band that played on Hit House, on 1.9.1964, and at the Star Club. In late 1965 The Scarlets and Reimar split, and Johnny Reimar began his solo-career.
Johnny Reimar Kristensen played in the school orchestra at Korslшkkeskolen in his youth and later won an amateur-competetion at Fyns Tivoli. He made his debut as a “pigtrеdsinger” (beat/rocknroll-singer) in 1958 at Allesш Hallen in Fyn. In 1960 he moved to Copenhagen and graduated in art directing and drawing while joining the rocknroll band The Clifters in 1959. He had has breakthrough in 1961, when he made his recording debut with The Clifters and changed his name to Johnny Reimar at the same time. In October 1961 “How Wonderful To Know” was released. In 1963 Johnny Reimar left The Clifters and joined the equally popular The Scarlets, who reached the top of the charts in 1963. The Clifters disbanded in 1963, but re-united in 1987. In 1964 Reimar took the step away from english-singing rocknroller to a more mainstream danish solo artist when he recorded ”Lille Fregnede Lousie”. Lille Louise gave Johnny his first silver-album after selling more than 50.000 copies. In 1969 he performed at Vin & Шlgod with the song “ Du burde kшbe dig en tyrolerhat”. With the song he secured his second silver-album. The Tyrolerhat song has been Johnnys trademark song ever since. The next year Johnny released his popular “Party” series, which was a huge hit. He quickly became known for his popular, folksy, down to earth style, and for the next 25 years he played to sell-out crowds with his “Party” band. He had other hits in 1972 with “Sikken fest vi har haft I natt” og “Ole det var I Spanien”. He has also done a lot of work in the recording industry and television. 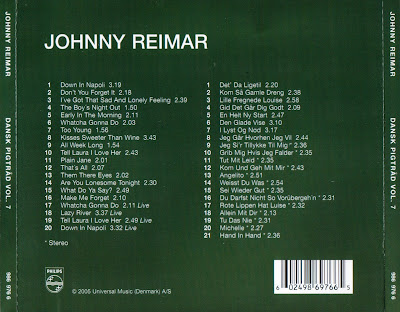