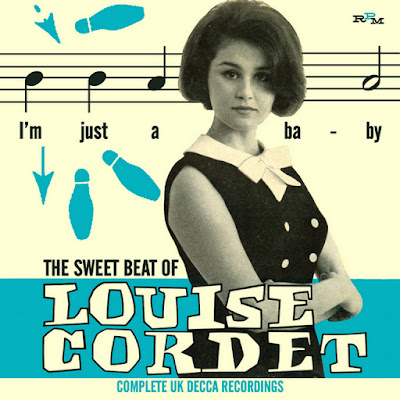 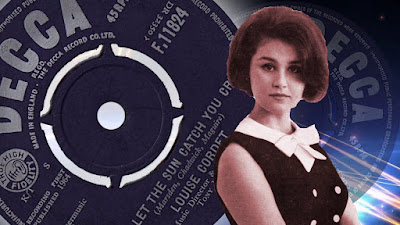 Louise Cordet was a phenomenon in English pop/rock for about two years, beginning when she reached number 13 on the charts with "I'm Just a Baby," released on English Decca in 1962. She was lucky enough to hit just as a new wave of British rock & rollers were coming to the fore, even though her sound was a little on the wimpy romantic side to fit in with British beat. As the daughter of a major television personality (and god-daughter of Prince Philip) with a convent school education, her origins were very different from the working class origins of most British rock & rollers, but she found an audience and held onto it, and for a time bidded fair to be Decca Records's answer to Helen Shapiro. In 1963, Cordet appeared in two movies, Just for You and Just for Fun; the latter, a follow-up to 1962's It's Trad, Dad, was particularly notable, presenting Cordet performing "Which Way the Wind Blows," which many onlookers regarded as the best music clip in the movie and the highlight of the entire film. In some ways, Cordet's career anticipated that of Marianne Faithfull, as it took her from a convent school into a world of pop stars, London night spots, and concert tours with the Beatles and Gerry & the Pacemakers. Indeed, she is said to have taught Paul McCartney a dance or two on his arrival in London, and Gerry Marsden originally wrote "Don't Let the Sun Catch You Crying" as a number for Cordet, before his group recorded it. Her final single, "Two Lovers," was a dazzling treatment of a Motown classic, drenched in heavy guitars and a great beat, and nearly as alluring as the Beatles' cover of "You've Really Got a Hold on Me." By 1965, however, Cordet had stopped recording and, ironically, became part of the cadre of hangers on surrounding Marianne Faithfull, serving as French pronunciation advisor at Faithfull's May 11, 1965 Decca Records recording session, and also doing her best in the press as a publicist for Faithfull during this period. 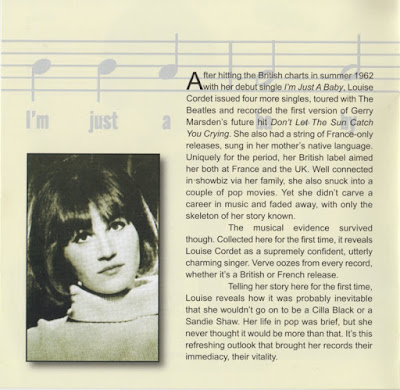 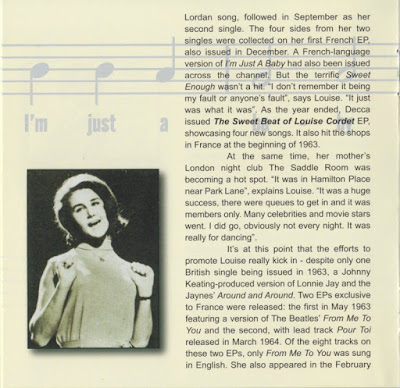 British singer Louise Cordet got a U.K. Top Twenty hit in 1962 as a teenager with her first single, "I'm Just a Baby," but never made the hit parade again despite issuing a couple dozen tracks between 1962 and 1964. This exemplary compilation has all of them, including her six singles, a 1963 British EP, a couple songs from the 1963 Just for Fun soundtrack, and nine tracks (all but one sung in French) released only in France. Cordet had a mild voice that might have been more suited to straight adult pop than the pop/rock she usually recorded, and was more a late relic of the U.K. teen idol pre-Beatles pop years than she was a part of the British Invasion. Combined with the ordinary and innocuous material she was given to sing, that makes this something for British rock/early-'60s girl singer completists, as well annotated and illustrated as it is. There are some tracks of note, if more for their origins than Cordet's interpretations, particularly "Don't Let the Sun Catch You Crying," which she released (and which was a flop) in early 1964 shortly before Gerry & the Pacemakers issued their famous international hit version. Her cover of "From Me to You" from a May 1963 French EP is one of the earliest and most obscure covers of a song by the Beatles (with whom she toured that year), and like some of her other recordings, had a faint Twist rock/"yé-yé" sound. She also made an unlikely venture into Cajun-flavored pop/rock on the 1963 single "Around and Around," and "Don't Let the Sun Catch You Crying"'s flip, "Loving Baby" (written by producer and ex-Shadows drummer Tony Meehan), has some eerie tones a little reminiscent of Joe Meek's work. She was ill-equipped for harder stuff, however, and the sloppy arrangement of Mary Wells' "Two Lovers" on her final single misses some chords key to the classic original. 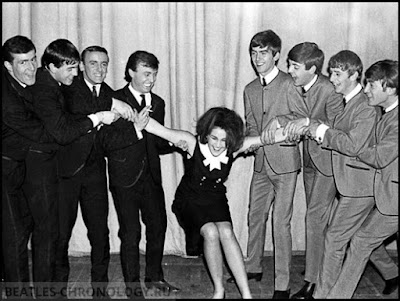 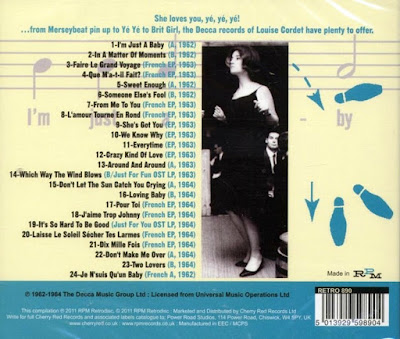