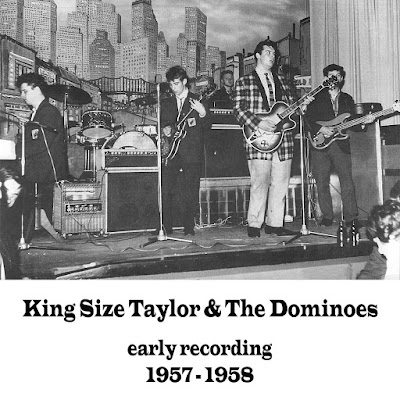 Edward 'Ted' Taylor, called 'King Size' in a not-too-subtle allusion to his formidable appearance, was already a highly experienced member of the first music generation from Liverpool when he made his first trip to Hamburg. He and the Dominoes claimed, probably justifiably, that they were one of the very first rock bands in their hometown. It's a fact that they were the first Merseyside group to go on air at Radio Luxembourg. As was so often the case, the Dominoes reached back to the end of the Skiffle era. Both, Ted Taylor and Bobby Thompson were members of the James Boys Skiffle Group as early as 1957. The first real Dominoes group existed by the end of 1957, but only as a pure Rock'n'Roll band. Charlie Flynn and Sam Hardie belonged to the group, two names that would remain constant in the band's ever changing genealogical tree. The name King Size Taylor And The Dominoes is mentioned for the first time in 1960.
More info and album The Shakers
****

The Crossfires (Pre-The Turtles) - Out Of Control

Out of Control is an album of material by The Crossfires, later known as The Turtles.
The Crossfires were a surf-rock group active between in 1963 and 1965. The group was formed in Los Angeles, California by Westchester High students Howard Kaplan (changed in 1965 to Kaylan, because that's how he always wrote his name), Al Nichol and Chuck Portz. Originally called 'The Nightriders'; the group Mark Volman, Don Murray from Inglewood High and Dale Walton (later replaced by Tom Stanton, who in turn, was later replaced by Jim Tucker) to the group in 1963, changed the band name to 'The Crossfires' and began performing guitar-driven surf instrumentals in concert across the Westchester area.
The effects of being in a band had their social consequences. The naive group were exposed to wild bacchanals, strangely devastating drinks like "Red Death," and all manner of mayhem. To rise to the occasion, and to keep the frat boys happy to insure the band of even more $200-a-night jobs, the Crossfires adapted their own, original versions of standards like "Money" and "What'd I Say" that were laced with the well chosen obscenities that the UCLA party boys loved so much. An ill-timed rendition of those very same ditties at the Westchester Women's Club effectively banned the Crossfires from Westchester, for good.
They set their sights on the adjacent South Bay area (Redondo Beach, Manhattan Beach, Torrance) and quickly found themselves winners of several Battle of the Bands competitions that resulted in a residency at Reb Foster's (a local DJ) Revelaire Club. The group also had a fan club of sorts, "the Chunky Club," whose members made obscene genital gestures with the help of spoons during band appearances. (For more insight into this period, refer to the Crossfires album, Out of Control) It was here that demands were made upon them to learn the various hit recordings of stars like the Coasters, Sonny and Cher, the Righteous Brothers and others for whom they would occasionally become the backup band.
In 1964, the Beatles and the whole English Invasion took effect. Mark and Howard put down their saxes, took up the vocals more ardently (Howard did most of the leads, Mark backups and tambourine) and the Crossfires dropped their entire repertoire of surf instrumentals and grew their hair long.
Despite this response, and their following at the Revelaire, frustration set in. The members weren't in high school anymore, two were married, and the band wasn't earning enough money. In 1965, on the night they were submitting their resignation from the Revelaire and about to break up, they were approached by Ted Feigin and Lee Lasseff who signed them to a brand new, nameless record label, later to be called White Whale. It was time for a name change as well. The group liked "The Half Dozen," or "Six Pack," but opted for Reb Foster's suggestion, The Turtles
http://theturtles.com/turtles.html
http://en.wikipedia.org/wiki/Out_of_Control_(The_Crossfires_album)
http://www.discogs.com/Crossfires-Out-Of-Control/release/3185490
http://saffronsrule.com/2014/05/06/cruised-the-revelaire-club-in-redondo-beach-to-check-out-the-crossfires-band-and-mark-volman/
http://www.classicbands.com/turtles.html
http://theturtles.com/downloads/TurtlesLONGHistory_1989.pdf
Personnel :
Al Nichol - lead guitar
Howard Kaplan - tenor sax, lead vocals
Mark Volman - alto sax, lead vocals
Don Murray - drums
Chuck Portz - bass guitar
Dale Walton - rhythm guitar
Jim Tucker - rhythm guitar ("One Potato Two Potato", "Stay Around", "Livin' Doll")
Tom Stanton - rhythm guitar ("That'll Be The Day", "Revelaire", "Silver Bullet")
Terry Hand - drums ("Livin' Doll", "Stay Around")
When the band changed their name from The Crossfires to The Turtles, lead singer Howard Kaplan changed his last name to Kaylan.
Out of Control - Pre-The Turtles.
Label: Sundazed Music ‎– SC 6062 1995

This is the earliest songs from the turtles when they were the surf group the crossfires. It has some great songs on it like 'one potatoe, two potatoe" ( a california hit regional single) , and 'silver bullet' and some average tracks too. The sound quality varies on these tracks but overall they are worth owning. In fact the whole turtles catalog is worth owning. The boys were just beginning at this point and they would explode into action in 1965 with their first turtles album. This one was of course a complilation of early preturtles tracks, and you do get excellent guitar playing, and a few harmonies but not like what was to follow
****
Source: allmusic-wingsofdream.blogspot.com
3 Comments+ Sharelabels (6)Flag
All60'sCCrossfiresTTurtlesUS

The Shakers aka King Size Taylor & The Dominoes 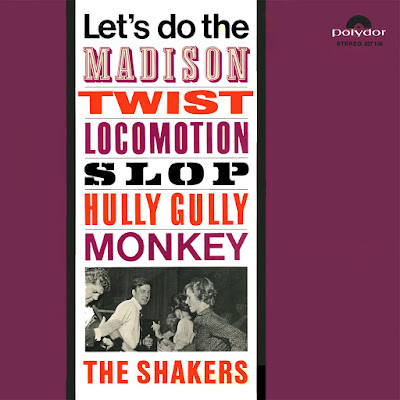 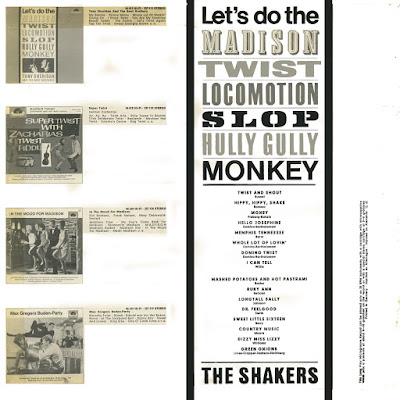 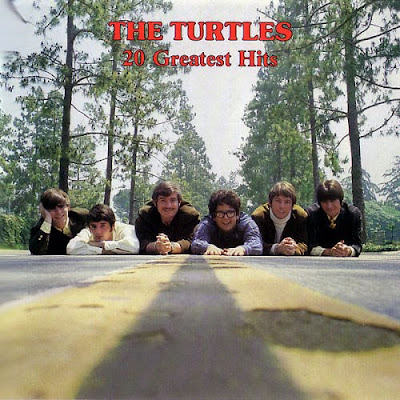 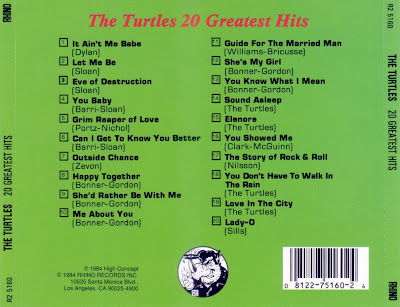 Billy was born in England on March 29th, 1946, and arrived in Australia with his family ten years later. When he was 12 years old, the family moved to Brisbane, where Billy attended Salisbury High School. This was the year he made his debut in show business, when he appeared in a show on a major television station in Brisbane. At school, Billy was interested in all forms of sport, and particularly in judo, leading him to form the first judo club in the school. Billy was still at school when he made his second very successful appearance on television, on the Russ Tyson TV show, "Anything Goes."

Shortly after he left school, Billy's singing carreer began in earnest, when he signed a contract with Channel 9, Brisbane. After a time, he left Brisbane for Sydney, and there his successful carreer continued, until eventually he was awarded the TV Logie for the Best Male Vocalist in 1964.

Billy Thorpe and his backing group, the Aztecs, were at this time to be seen frequently on all television networks throughout Australia, and also giving live concerts in all capital cities and major country towns. They were rated the most popular group in Australia, when they recorded four number one hits, consecutively. On of these hits was "Over the Rainbow," the first Australian record ever to appear on the American charts. More appearances on television followed, when Channel 7, Sydney, signed on Billy and his group, and Billy acted as star and compere of "It's All Happening," a one-hour pop show.

In April, 1965, the four instrumentalists in the Aztecs were replaced when the original members left to make their own way in show business. This resulted in Tony Barber becoming a recording star and composer in his own right, and also in Vince Melouney going to England, where he became lead guitarist for the world-famous group, the Bee Gees. The new Aztecs were Colin Risby, lead guitar, Ted Toi, bass, John dick on drums, and Mike Downes, rhythm guitar.

Billy Thorpe and his group, the Aztecs, have been presented with awards from television and radio companies throughout the nation, both for appearances on television, and for the success of their records. These awards, along with the support of the record buying public, show that Billy Thorpe has proved himself to be one of the most talented artists ever to appear on the Australian music scene.
http://en.wikipedia.org/wiki/Billy_Thorpe_%26_the_Aztecs
http://www.milesago.com/artists/thorpe.htm
http://www.billy-thorpe.com/

The tracks on this album were selected from a cross-section of Billy's extensive repertoire, and whether you like fast, slow, rock, medium tempo, blues, jazz, or up tempo, there is something for you on this record...
text
Source: allmusic-wingsofdream.blogspot.com
2 Comments+ Sharelabels (5)Flag
All60'sAustraliaAztecsBilly ThorpeT