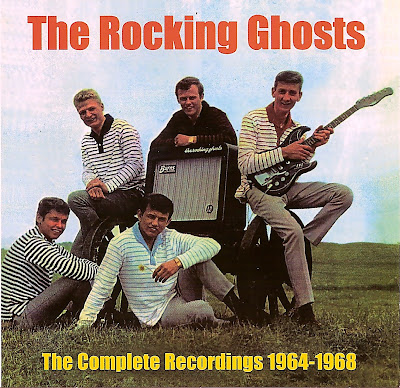 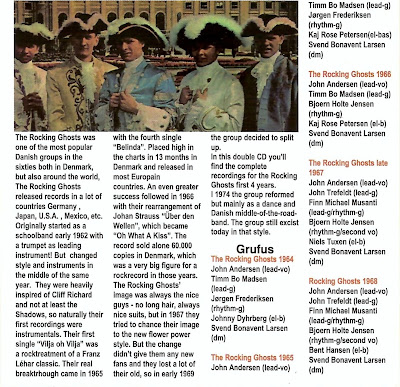 On January 28, 1964 the band won the Copenhagen championship in Rock at Nora Bio, which lead to a record deal with Metronome Records and producer Jørgen Ingmann. The instrumental debut album was called Vilja, Oh Vilja by Franz Léhar. Vocally the band broke through with their own Belinda that stayed on the charts for 13 months and was released in many European countries as well as the USA and Japan. During a trip to Bremen in April 1965, Johnny Dyhrberg left the band and was replaced by Kai Rose Petersen (el-b) and by the end of 1965 Bjørn Holte Jensen
(rhythm-g) (ex The Ex-Checkers) replaced Jørgen Frederiksen. As the best selling album Oh, Oh What A Kiss, a rework of Johan Strauss' Über den Wellen, was a chart success in both 1966 and 1967.
In September 1967 the band decided to change their style to a more psychedelic flower power inspired pop sound, a change, however, Timm Bo Madsen and Kai Rose Petersen did not agree with and they consequently left the band.
They debuted with their new style at the Procul Harum concert in Tivoli. The new band recorded 2 singles for CBS Records with the following members: John Andersen, Svend Bonavent, Bjørn Holte, John Trefeldt (ex The Treffters), Fin Michael Musanti (rhythm-g, org) (ex The Playmakers) and Bent Hansen (el-b) (ex The Meteors).
The Rocking Ghosts were extremely popular in 1964-1967 and played, among other venues, at Giraffen, Enghaveparken, Hit House and Dansetten in Copenhagen, but their largest audience was primarily outside Copenhagen. The band also toured extensively in Germany, Austria, Italy, Sweden and Finland.
Musically and image wise the band was inspired by Cliff Richard & The Shadows' combination of vocal and instrumental rock & roll more than by the beat sound of the time. By changing their style in 1967 the band lost a lot of their fans who had a hard time accepting the new image and in the spring of 1969 the band split up.
Musically The Rocking Ghosts contributed to the following Danish movies in the 1960s: Jeg en elsker, Min søsters børn, Mig og min lillebror, Pigen fra Egeborg. Only the recordings from Min søsters børn were released as an album in 1966.
In 1964, using the name The Tigers, The Rocking Ghosts recorded a commercial record for the gas company ESSO.... 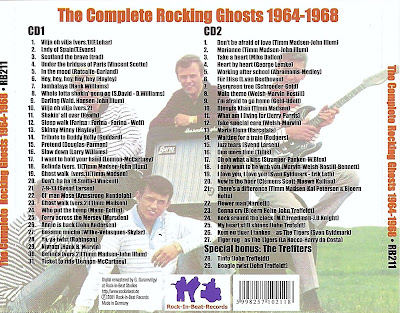