Betty MacDonald and Anybody can do anything

Betty MacDonald fan club fans,
which one is your favourite book by Betty MacDonald?
I adore all of them.
Maybe 'Anybody can do anything' is my No. 1.
( see article below )

Betty MacDonald fan club honor member Mr. Tigerli will be back soon with some more huge surprises for his fans in 5 continents.

Don't miss a new  breakfast with Brad and Nick at the bookstore, please.

I already got ESC fever.

April will be a very interesting month for Betty MacDonald fan club ESC fans from all over the world.

We are looking for the Betty MacDonald fan club ESC winner 2016.

ANYBODY CAN DO ANYTHING: BRING BACK BETTY MACDONALD!! 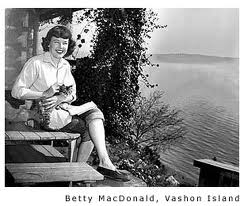 Several years ago a friend turned me on to a writer named Betty MacDonald, best known as the author of The Egg and I (1945) (the book that gave rise to the characters Ma and Pa Kettle), and who I say--let's start reading again!

The book of hers I'm (re-)reading now is called Anybody Can Do Anything, and it's all about Seattle in the Depression, and Betty's wacky family--they're all back home, living with the chain-smoking, novel-reading, mild-mannered mother--headed up by the oldest sibling, Mary, and how Mary gets Betty, who is divorced with two young daughters, a succession of odd jobs for which Betty is completely and utterly unqualified. 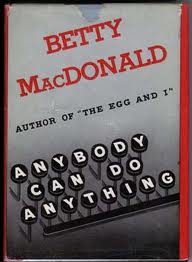 Here's the conversation that ensues, for example, after Mary announces to Betty that she's volunteered her for a job "at the Western Insurance Company being private secretary to a perfectly darling man named Welton Brown."

I tried to keep my voice normal as I asked, "Just what have you told this Welton Brown I could do, Mary?"

Mary said, "Stop interrupting and you'll find out. Because Welton gets out a magazine, his secretary has to be able to type and take shorthand, know all about insurance, be familiar with advertising and layouts, draw well enough to illustrate the magazine and be able to write and edit articles. He'd really prefer someone who's been published."

"Well," I said, "A--I'm only mediocre to rotten in shorthand and typing; B--I don't know anything about advertising or layouts; C--I majored in art in college but we never drew anything but plaster casts; D--I can't write and I've never had anything published and all my insurance information is mixed up with chickens." [an allusion to what would become her first book, see below] 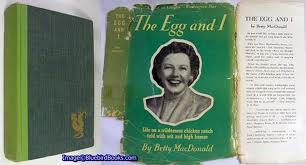 Mary said, "Listen, Betty, I've known you for twenty-four years and you've never thought you could do ANYTHING. Now there's a depression and  jobs are hard to find and you've got two children to support and it's about time you grew up and changed your thinking to things you can do instead of things you can't do. Mull over your talents and build up your ego. A--you have to know insurance--you were married to an insurance salesman. B--You have to know advertising--you don't but I do and I can teach you. C--You have to be able to draw and you say you can only draw plaster casts--and what may I ask, could be more ideal training for an insurance company with all their accidents? D--Shorthand and typing--if  Welton Brown thinks he can get a court reporter who can do all those things he's a bigger jackass than I think he is. E--You have to be able to write and that is one thing you have to admit you can do. What about your children's stories--what about 'Sandra Surrenders'--I'll bet the Ladies' Home Journal would snap it up if we ever finished it."

In other words, this is a book we could all use in our own Depression era, not because it has job-hunting tips but because of its complete lack of self-pity and huge sense of fun.

Betty ends up working as a photo tinter, an organizer for a rabbit grower, a typer of bills for a florist, a dentist and a laboratory. She works for an oil promoter, a public stenographer, a Mr. Wilson who runs a pyramid scheme, and a gangster. Mary's also constantly setting Betty up on gruesome blind dates, and as the two of them good-naturedly dismiss the guy with roving hands as "Oh that old raper" and the elderly lech as "Probably just some lonely old buzzard who wants to meet some girls," I couldn't help reflecting upon how much we've lost in our dreadful anti-sex-discrimination-lawsuit era. For fun, the sisters (there are four of them) put on a pot of spaghetti, invite a crowd of artistes--some of  whom end up staying for years--and crowd around the gramophone or piano making fun of each other, smoking, drinking endless cups of coffee, putting on plays and/or singing.

Actually, everyone in Betty's family, including her, chain-smoked, which probably did not help stave off the TB that killed her at the age of 50, but again, you have to appreciate her refusal to whine or blame. Here's the bridge from one job to another with which she alludes to her year in a sanitarium about which she wrote the also delightful The Plague and I:

"I finally collapsed with tuberculosis and was wheeled away from the Treasury Department. When I got well again I went to work for the National Youth Administration. The NYA and Mary would have seen eye to eye about a lot of things. Executives for instance. Mary believed that everybody but our collie was a potential executive and the NYA proved it. " 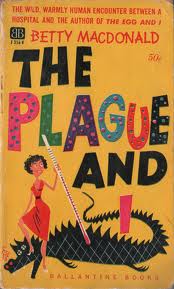 There's also a great chapter--"All the World's a Stage"--on the free entertainment to be found by going about the city ferreting out amateur dance and song recitals:

"Then Miss Grondahl announced that she would play "Rustle of Spring" and "Hark, Hark the Lark." She had shed her gold cape and was simply clad in a sleeveless black satin dress and some crystal beads. She settled herself on the piano bench, folded her hands in her lap and began to play. Back and forth, back and forth, back and forth, and then suddenly, like running in backdoor in jumping rope, she lit into the first runs of "Rustle." Miss Grondahl was a vigorous very loud player but what made her performance irresistible to [Betty's sister] Dede and me were the large tufts of black hair which sprang quivering out of the armholes of her dress each time she lifted her hands at the end of a run or raised her arms for a crashing chord."

Eventually, Betty re-marries, moves to Vashon Island, off the coast of Washington state, and begins working for a contractor with cost-plus government contracts (she would later write Onions in the Stew about her time there). 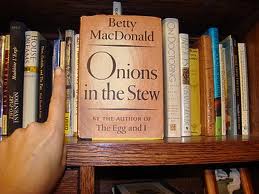 But first, Mary convinces her to write a book about her adventures on the remote chicken ranch to which she'd moved with her first husband (father to her two daughters): a marriage that had ended when Betty matter-of-factly packed up the kids one rainy, gloomy day, walked them down the hill, and boarded a bus for Seattle, never to return. The book was accepted by J. B. Lippincott, serialized in the Atlantic Monthly, and the rest was history, thereby proving Mary's theory that anybody can do anything, or as she triumphantly told Betty, "You just feel successful, but imagine how I feel. All of a sudden my big lies have started coming true!"

Would that we all had a sister Mary! And long live Betty MacDonald.
Posted by HEATHER KINGat 5:03 AM

Email ThisBlogThis!Share to TwitterShare to FacebookShare to Pinterest
Labels: ANYBODY CAN DO ANYTHING, BETTY MACDONALD, HOPE IN THE DEPRESSION, ONIONS IN THE STEW, THE EGG AND I, THE PLAGUE AND I

Source: bettymacdonaldfanclub.blogspot.com
Permalink+ Sharelabels (1)Flag
AllBetty MacDonald and Anybody can do anything

Betty MacDonald and Anybody can do anything

i adore Betty MacDonald's book  'The plague and I and Betty's very witty friend Kimi ( Monica Sone) but my favourite book by Betty MacDonald is 'Anybody can do anything'.

Therefore I'd love to see this musical. ( see text below )

Anybody Can Do Anything: A Musical

Adapted from the best-selling memoir by Betty MacDonald (of "The Egg and I" and "The Magical Mrs. Piggle-Wiggle" fame), this new musical tells of how Betty survived the Great Depression as a single mother, thanks to the loving support of her family, especially her tremendously bossy sister Mary. Through terrible bosses and worse dates, with a Christmas tree harvested from the local park and meatloaf for 49 Sundays in a row, the family keeps its sense of humor and faith in each other. Funny and bittersweet, nostalgic but sharp-tongued, "Anybody Can Do Anything" is a musical homage to a Seattle original.

There will be a new  BettyMacDonald - and Mary Bard Jensen fan club contest in August.

You only have to tell us your favourite book by Betty MacDonald and her sister Mary Bard Jensen.

You'll get all the info in August!

I enjoyed the great story by Anja.

Raccoons are really very shameless when they are looking for food. 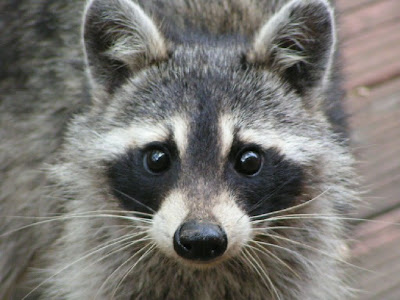 It's not a bad idea to relisten to Wolfgang Hampel's wonderful interviews.

Let us know everything, please.
Thanks a million in advance!
We hope Betty MacDonald fan club organizer Linde Lund will be back because we adore her so much.
Linde Lund  did a tremendous work.
All our love and support to Linde and her little darling.
Don't miss a new great breakfast with Brad and Nick, please.

Source: bettymacdonaldfanclub.blogspot.com
Permalink+ Sharelabels (1)Flag
AllBetty MacDonald and Anybody can do anything