Published:
Please welcome Geoffrey Gudgion as part of the 2013 Debut Author Challenge Guest Blogs, Saxon's Bane will be published on August 27, 2013 (US) by Solaris Books. 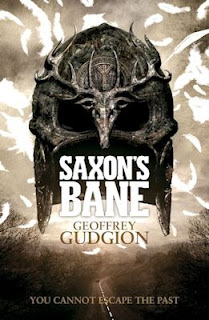 An Accidental Fantasist
I feel a bit of a fraud. Have you ever been invited to a party by people you’ve always admired, but never met? You wander around, smiling politely, meeting wonderful fellow-guests, with that niggling fear that you’ll say the wrong thing or that they’ll decide you don’t belong there after all. Hi, folks. That’s me, in the corner, the new guy who’s being rescued by a very gracious hostess. Hi, Sally!

You see, I’m only here by accident. I didn’t set out to write fantasy, in fact when I started, I didn’t really understand ‘genre’. Saxon’s Bane grew into this space from the nucleus of an idea. I wasn’t trying to build a new world, the way proper fantasy writers do, just take the existing one and twist the rules a little. I wanted to put readers into a believable, twenty-first century environment, such as the kind of rural backwater you might find on a cycling holiday, and then make them wonder if everything around them could be explained by science. I imagined inviting people to walk in England’s ancient woodland, and making it so real that they would close their eyes and inhale its mighty peace. Then I’d make them shiver with the sense that they were not alone, that they had just caught the scent of an otherness. A touch of sulphur, perhaps, amidst the honeysuckle, a hint of something immeasurably old.

So much for setting. So far, you might say, pretty mainstream. But what about that ancient otherness? England’s history is written in its landscape, for those who know how to look. So I started with a village, Allingley, which would have been Aegl – ingas – leigh in Anglo-Saxon, the clearing of the people of Aegl. At some time in the sixth or seventh century, it might have been the place an invading warlord chose to ground his spear and plant his generations. By the twenty-first century, it was just a sleepy little hamlet, sitting astride the Swanbourne stream, until the peat-preserved body of a Saxon warrior is discovered on its outskirts. Bone fragments from a Saxon female are nearby. The media interest that follows becomes a frenzy with the news that the warrior had been ritually slaughtered.

Now to populate the story. I sketched out the character of a woman archaeologist who becomes obsessed with her project, and shows a preternatural understanding of the Saxon couple. She remembers the old legend of the warrior Aegl and his wife Olrun, the Swan Maiden, and she fears both madness and professional ridicule when the present begins to mirror the ancient, bloody past. I also had an idea for a man recovering from life-changing injuries in a car crash near Allingley, a man who doesn’t know whether what he ‘saw’ at the edge of death was real or the product of his own traumatised mind.

Place, catalyst, characters. Saxon’s Bane was born. After that, the plot flowed as swiftly as the Swanbourne.

“Wonderful book,” said a commissioning Editor from one of the largest publishing houses as we grabbed coffee at a conference, a while before Solaris bought Saxon’s Bane. “Wonderful. But I don’t buy fantasy. I mean, there’s a suggestion of a ghost, and then there’s the near-death bit. It’s fantasy.”

I nearly told him, then. I was almost stung into blurting out my own brush with death, but I wasn’t ready and it isn’t the kind of thing you announce over coffee. ‘I heard myself left for dead, once’, doesn’t flow easily from ‘pass the sugar, please’, but some of the fantastical elements of Saxon’s Bane needed little imagination; fingertips probing my neck for a pulse, and “this one’s dead, too,” as I slipped away into a place mapped more by faiths than by science.

That incident isn’t Saxon’s Bane, nor is it a story for this forum. You’re not reading, and I’m certainly not writing misery memoirs. But that brutal slice of personal history did allow me to craft a character emerging from trauma; he’s vulnerable, irrational, and emotionally incontinent, but he fights. Not out of courage, but of necessity. Even when the only weapon left to him is a bloody-minded refusal to let go, he fights. He’s the sort of guy who will keep fighting even when Allingley’s past comes crashing into the present, and all logic says ‘run’.

“Ghosts and a near-death experience,” the Editor said. “Pure fantasy!”

The irony is delicious. So here I am, people. I’m so pleased to be here, and thank you for taking me in. Another drink? You’re too kind, Sally. Perhaps a dry, white wine? 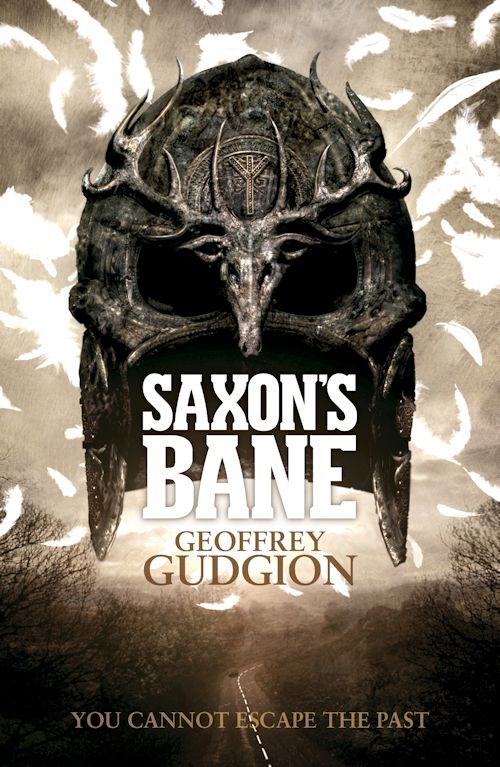 In a supernatural novel with echoes of Alan Garner and Kate Mosse, Geoffrey Gudgion chills the modern reader as the supernatural past invades the present.

Fergus Sheppard’s world changes for ever the day his car crashes near the remote village of Allingley. Traumatised by his near-death experience, he returns to thank the villagers who rescued him, and stays to work at the local stables as he recovers from his injuries. He will discover a gentler pace of life, fall in love – and be targeted for human sacrifice.

Clare Harvey’s life will never be the same either. The young archaeologist’s dream find – the peat-preserved body of a Saxon warrior – is giving her nightmares. She can tell that the warrior had been ritually murdered, and that the partial skeleton lying nearby is that of a young woman. And their tragic story is unfolding in her head every time she goes to sleep.

Fergus discovers that his crash is uncannily linked to the excavation, and that the smiling and beautiful countryside harbours some very dark secrets. As the pagan festival of Beltane approaches, and Clare’s investigation reveals the full horror of a Dark Age war crime, Fergus and Clare seem destined to share the Saxon couple’s bloody fate.

"Once there was a great classical tradition of rural British horror from MR James to The Wicker Man. Now Geoffrey Gudgion has revived the style and modernised it to great effect, proving there's still nothing as creepy as the countryside." Christopher Fowler 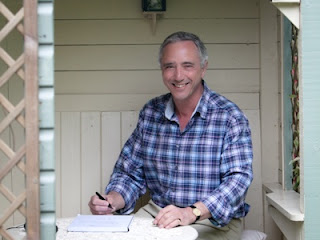 Geoffrey Gudgion was the scholarship boy who never realised he’d have been happier as a writer than a businessman. until, that is, he had a spectacular row with his boss and stepped off the corporate ladder. Prior to that epiphany, he made his first attempts at writing fiction during long deployments in the Royal Navy, and consistently failed to reconcile writing with being CEO of a technology company.