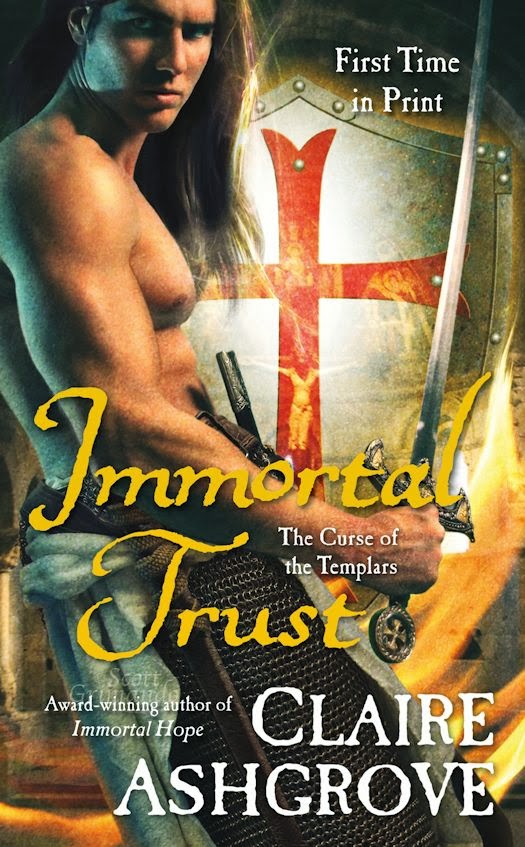 When archaeologist Chloe Broussard accepts the contract to lead a dig in Ornes, France, she has no idea she will uncover the Veil of Veronica. When she does, she discovers a danger far greater than the demonic presence stalking her at night. Azazel wants her, as well as the Veronica, and his chosen minion is her brother. Her hope lies with immortal Templar Knight Lucan. Her life depends on oaths she knows nothing about.

For countless centuries, Lucan of Seacourt has lived with the knowledge that his brother killed their family. Now, as Azazel’s darkness eats away at his soul, old betrayal stirs suspicion. He trusts no one. Not even the seraph who can heal his dying spirit.

With the fate of the Almighty hanging in the balance, Lucan must find faith in something more terrifying than the dark lord’s creations. He must learn to believe his heart.

Immortal Trust is the third in the Curse of the Templars series by Claire Ashgrove and this instalment focuses on the Templar, Lucan of Seacourt. Lucan is on his way to meet his seraph, the fiesty archeologist Chloe who is about to to uncover the find of her career - the Veil of Veronica  - a highly prized religious artifact. Despite the fact that the series is based on the Templars the story is largely told through Chloe's POV.  Chloe believes that Lucan (and the other Templars) are representatives of the church who are sent to secure the artifact when her dig is complete. Little does she know that Lucan is actually a centuries old Templar and that she is destined to be his 'one true love' and save his soul. Lucan is drawn to Chloe but knows how important the Veil is, to the not just to the Templars but also to the evil Azazel who also determined to get the Veil using whatever nefarious means necessary. With the fate of mankind in the balance Lucan is torn between doing what is right and what is right for him. Chloe however, is torn between her growing affection for the hunky Templar and uncovering the discovery of her career. All this happens within the backdrop of rural France in the winter with a healthy dose of demonic possession just to make things interesting.

I liked Immortal Trust but that could have been down more to the model on the front cover rather than to the actual contents of the book. I thought that the story focused more on Chloe rather than Lucan in contrast to the book description. The story was a very easy read and the characters likeable (except of course, for Azazel) but I think they could have all been fleshed out a bit more. There was very little of Azazel until near the end which I think Ashgrove could have expanded on.  The dynamic between Chloe and her brother was written in quite a realistic way, as was the interaction between Chloe and Lucan. While attracted to Lucan she didn't act like many heroines in this type of novel by falling immediately into his arms (and bed).  Without giving too much away I didn't agree with the choice Chloe made at the end of the book in relation to her brother as it was inconsistent with how both characters were written.

The Templars make for great characters as they can quite easily be either the heroes or the enemy and Lucan is a great example of the heroic version. If you like a novel with a bit of a mix of historical fantasy and paranormal romance then this is a good choice, especially if you want it in an easy to read format. Do I like the series well enough to continue? Perhaps not although it really depends on what the model on the next cover looks like (shameless, I know!)