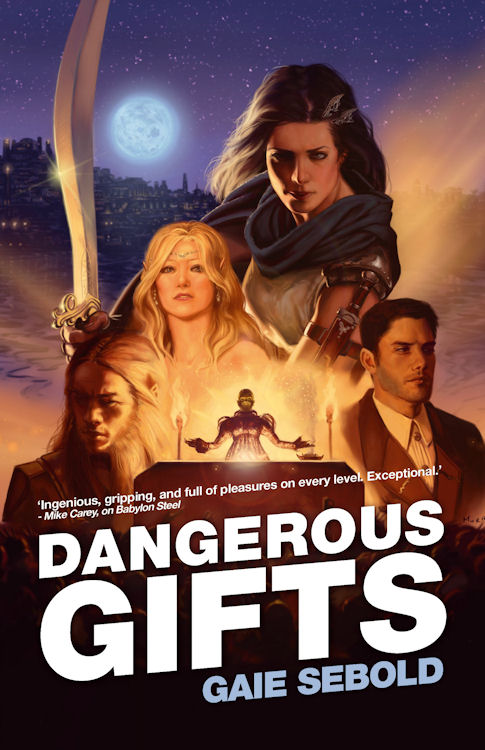 Babylon Steel, former avatar of the goddess of sex and war, currently owner of the Scarlet Lantern, the best brothel on Scalentine, city of portals, has been offered a job; as bodyguard to Enthemmerlee, the latest candidate for the Council of Incandress; and as spy for the Diplomatic Section, the barely-acknowledged government of Scalentine.

She doesn’t want it. Incandress is on the verge of civil war. Enthemmerlee represents the hopes or fears of a large portion of its population and is a prime target for assassination. And on Scalentine racial tensions and economic stresses are boiling up, with Babylon’s lover, Chief Bitternut, trying to keep the lid on.

But circumstances conspire to send her to Incandress. There, what with attempting to turn Enthemmerlee’s useless household guard into a disciplined fighting force, dodging the Moral Statutes, the unwilling presence of a very annoyed member of the Diplomatic Section and the need to keep both herself and her client alive, things become rather too interesting. And that’s before Babylon realises that the situation is far worse than she thought, and is driven to a choice that will have far-reaching consequences…

Dangerous Gifts is the second book in the Babylon Steel series which takes our plucky heroine far away from her home and friends to Incandress in order to guard the new counselor Enthemmerlee. Tensions are mounting at home as humans create discord and shifters are being  killed. No matter how much she would like to Babylon, finds she is unable to refuse the job despite wanting to stay at home to protect her friends and be with her boyfriend 'The Chief'. Political intrigues, shoddy soldiers plus a ban on anything sexy are big challenges for the former avatar of a god and owner of the best brothel in town.

Babylon herself, is an interesting character as she has quite the colourful past and an even more colourful job as a part time body guard, prostitute and brothel owner. Her sexual proclivities are quite subtle and it’s almost as if Babylon pops into the office to type a few memos rather than going to ‘service’ a few clients. I liked this about Sebold’s writing style as the book could have veered towards erotica. Instead, sex was almost incidental to the story rather than the focus. I wasn't totally convinced with Sebold's portrayal of Babylon as a protector or body guard but like the sex in the story, action and violence played second fiddle to character interaction. Character development, especially of Babylon appeared to take priority for Sebold in this story although sometimes at the expense of the plot.

The plot was fairly typical with Babylon given the task of protecting Enthemmerlee and figuring out who would want to see her dead. I actually guessed who the ‘baddy’ was quite early on but still enjoyed seeing how the plot would play out. I didn't feel I was stretched either with the plot or with the characters as the story just seemed to glide along.

I hadn't read Babylon Steel, the aptly named first book of the series, when I started Dangerous Gifts. Normally, I always try to read all the books in the series. I however, made two incorrect assumptions: 1) that the Sebold would, as many authors do, recount large parts of the  plot of the previous book in the subsequent one  2) by reading reviews I could adequately get a picture of who the main characters were.  Instead I was too excited about having a new book with an interesting cover so I dug in and read it.  Even though I thought I had quite a good grasp of ‘who was who’ I still was a bit surprised at how much the plot of the first book played a part in the second. In retrospect, I should have put Dangerous Gifts down and and started from the first book. For the first few chapters I felt I was always reading in catch-up mode. There are many different races and species in Babylon’s world.  I often lost track who had scales or a tail or who sprouted fur every full moon. I would then go back and re-read a chapter or two in order to figure this out which meant that it took me slightly longer to read than it would have normally. Despite this, Dangerous Gifts was a pretty quick, easy read. I don't think I missed out that much about Babylon or the other main characters not having read book 1.

I liked Dangerous Gifts although I am not sure I liked it enough to continue the series. If you like a quirky character in a fantasy setting then I recommend starting at book 1 of the Babylon Steel series.
Source: qwillery.blogspot.com
+ Sharelabels (4)Flag
AllBabylon SteelBook ReviewsGaie SeboldSolaris Books