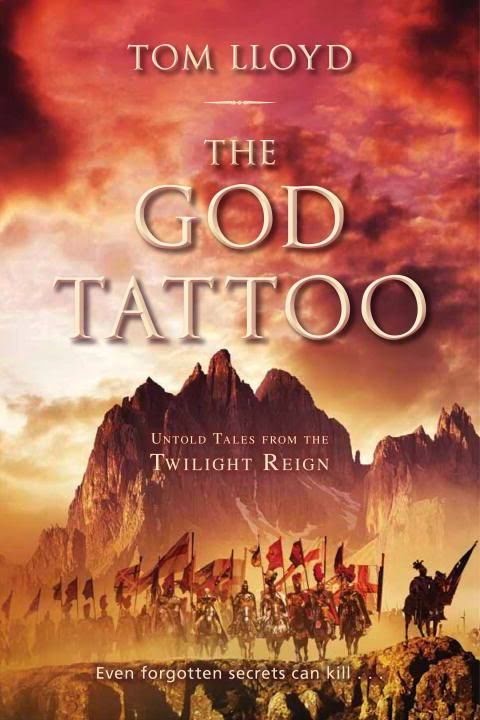 A short story collection fleshing out the world of the critically-acclaimed Twilight Reign series, a tremendous work of mature epic fantasy.

The history of the Land may remember the slaughter at Moorview or the horror of Scree's fall, but there were other casualties of the secret war against Azaer-more tales surrounding those bloody years that went unrecorded. In the shadow of memorials to the glorious dead, these ghosts lie quiet and forgotten by all but a few.

A companion collection to the Twilight Reign quintet, these eleven stories shine a rather different light on the Land. Look past the armies and politics of the Seven Tribes and you will find smaller moments that shaped the course of history in their own way. But even forgotten secrets can kill. Even shadows can have claws.

The God Tattoo is a fantastic collection of short stories that take place in the Twilight Reign world. It's no light thing for me to say that a short story collection is fantastic. I hardly ever read short story collections, and when I do it's nearly impossible for me to like each one of them. I tend to read a few pages, and if the story doesn't grab me, I move on. I was a little nervous to start this book, because I'm obligated to read every page before I write a review. I should also say I've not read any of the books in Tom Lloyd's Twilight Reign series, even though they've been on my to-read list for a while. With all that said, this collection surpassed my expectations.

Lloyd's world is rich in history and detail. He does a great job of giving you enough information to make the story real, but leaves enough unsaid for you to want more. Most of the stories are short and entertaining, giving you a feel for his ability to create intriguing characters and situations. There are a string of stories that are vaguely connected to each other, which hint at a bigger story below the surface. One of the most surprising and enjoyable parts, is that several of the stories have a Gothic Horror slant. I always enjoy my fantasy mixed with other genres and Lloyd is really good at doing Gothic Horror.

Having never read any of the previous books in the series, I never felt lost with events or characters. It helped that most of the collection features new characters. This collection of stories definitely makes you want to read more from Lloyd's world.

Beware, The God Tattoo is a gateway drug to the Twilight Reign series. The God Tattoo contains strong language and descriptive violence. For that reason, I would recommend it to adult readers. It's perfect for both fans of fantasy and Gothic Horror, as well as those curious about the Twilight Reign series. I'd also recommend it to anyone who likes to read short story collections.

2 Comments on The Qwillery: Review: The God Tattoo by Tom Lloyd