John:   Like, do I write in my underwear? How is my process different? Or, do I have a one-eyed character in every one of my plots?

Hmm. As for my process, I DO write in my underwear. I guess a quirky thing about my process of writing is I’m not an everyday writer. I have too many responsibilities to put down a thousand, two thousand words a day. I have a demanding day job and a wife and two young daughters that need my attention. I’m creative director of Needle Magazine of Noir that takes up my time intermittently and I also do freelance design, programming and animation. And I’m in a band. So, when I write, I write in spurts.

I don’t listen to the radio on my daily commute. I percolate on plot and character.

As for quirks in the actual product itself, I tend to have characters that injure themselves, both physically and emotionally. I tend to have characters that sacrifice themselves. I don’t know why. I kill off beloved characters. And all of my books are set in Arkansas, except my fantasy/western novel which isn’t set in this world at all – yet it still has some nods to Arkansas, names of towns, the character of the people. You can take the boy out of the country, but can’t take the country out of the boy, or so they say.

John:   I’m a modified flying-by-the-seat-of-my-pantser. I don’t write with an outline or synopsis – I’ve tried and that doesn’t work for me. I know my dominant characters. I know my ending. I know my mid-point. I know a few scenes I want to write, a few images I want to capture.

Then I sit down and start writing it, in order. Some folks can write scenes, jumping around in the novel’s timeline and keep all that straight. Not me. I’m a linear kind of guy. I write from the beginning to the end.

I like to be able to discover the story as I write it. I like being surprised by what my characters say and do. I don’t think I can achieve that with in-depth and detailed outlining and synopsizing.

TQ:  What inspired you to write Southern Gods?

John:   Many things lead to inspiration and sometimes it’s hard to keep it all straight. It’s all roiling around in my scrambled noggin’, sometimes. But I remember a bit of the circumstances leading up to the gestation of Southern Gods.

I spent the summer of 2007 buying Manly Wade Wellman novels and anthologies and read everything he’d ever written about Silver John – Wellman’s travelling, supernatural fighting hero who plays a silver-stringed guitar. At the same time, I had been reading a non-fiction book called about border blasters, the “pirate” radio stations set up across the border from the US in northern Mexico in the fifties. That was the kindling.

Then, one morning driving to work, NPR featured a segment about A&R agents in the fifties – how they’d have some money and would really just travel around, looking for talent, sometimes in the most obscure places, places far off the beaten path. That segment got my creative juices flowing. Add to that mix an intense interest in music history as it relates to the South, a fascination with old school radio history and practices, payola, and the birth of rock-n-roll. Those were the sparks.

But I wasn’t a writer then. It was just stuff I was interested in. It wasn’t until I entered the National Novel Writing Month competition in November of 2007 did I try to form all of this into a cohesive story line. That was the gasoline.

TQ:  What sort of research did you do for Southern Gods?

John:   I read a lot on Arkansas radio stations but Ray Poindexter’s Arkansas Airwaves was essential. I’ve already mentioned Border Radio: Quacks, Yodelers, Pitchmen, Psychics, and Other Amazing Broadcasters of the American Airwaves if not by title.

I had to read up on the battle in the Pacific in World War II – where my protagonist, Bull Ingram, fought at Guadalcanal. I read a few marine memoires of the Pacific battles, like Richard Tregaskis’ Guadalcanal Diary. And a couple others but I can find them now.

I talked with my father extensively about the time. I wanted to depict Arkansas as backward and remote – which it was – but I tried not to be exploitative. The biggest problem I had was how much items cost at that time. So I glossed over many of the aspects of money.

There is some Latin in Southern Gods – not a lot – so I had to dig out my old Latin-to-English Dictionary. And I used Wikipedia to check small facts, especially in the revision phase.

John:   The easiest character to write was Sarah Rheinhart because her story was mostly domestic – a homecoming story – and she has a child. I have children. So describing her life at The Big House, the Rheinhart Plantation, was easy. I just drew from the experience of having children.

Bull was harder because I needed to strike a balance between him being a brutal, violent man and still being likeable. I also needed to humanize him enough to make sure that his story arc was believable. I had to create a character you’d believe could beat a man to death yet also be gentle. So, I had to, in essence, write a human character like a bull. Both dangerous and gentle.

My favorite scene is probably the meeting between Sam Phelps and Bull Ingram. Sam is loosely based on Sam Phillips of Sun Studios and that scene was fun to write. And there’s also a scene with Bull’s former (deceased) Captain near the end of the book who appears to him in a vision dressed in a Roman centurion’s uniform yet is as profane as ever. Captain Haptic or Cap Hap. He was fun to write.

John:   As I was writing it? This is weird, but at the time, I listened to Sufjan Stevens’ Illinois almost constantly as I would write. It has this droning, hypnotic appeal that I liked. I wasn’t listening to blues as you might think.

If I had to assign a playlist to go along with reading Southern Gods, I’d say you need to listen to Alan Lomax’s recordings from the Library of Congress – full of field hollers and gospel and proto-blues. That and anything by Robert Johnson.

John:   Well, I’ve had a good year, this year. Southern Gods is coming out now and my agent and I have sold my next novel, This Dark Earth, to Simon & Schuster’s Gallery Books – that’s the old Pocket Books imprint. We also sold my young adult novel, The Twelve Fingered Boy, to Lerner Publishing’s Carolrhoda Labs imprint in a three-book deal. I’m especially excited about that because I truly love YA fiction – there are so many exciting and daringly written YA titles nowadays – AND that it’ll be released in hardback.

I have another novel complete, called The Incorruptibles. I think it’s the best thing I’ve ever written. It’s a fantasy/western/alternate Roman history/demonpunk novel. Or something like that. It’s kinda hard to describe. And we’re sitting on it currently, waiting for the right time to send it out into the world since it IS the beginning of a fantasy series. And I’ve got books I have to write on contract before I can start writing a new series.

But, yes, I’ve got a lot on my plate and hope to have more. Someday I might even be able to quit my dayjob. Maybe. If I get lucky.

Anyway, you can learn more about all of my shenanigans over at The Bastardized Version (http://bastardizedversion.blogspot.com).

John:   Thanks for having me! 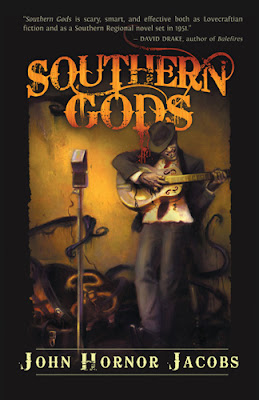 Disturbed and enraged by the bootleg recording the DJ plays for him, Ingram follows Hastur's trail into the strange, uncivilized backwoods of Arkansas, where he hears rumors the musician has sold his soul to the Devil.

But as Ingram closes in on Hastur and those who have crossed his path, he'll learn there are forces much more malevolent than the Devil and reckonings more painful than Hell . . .

In a masterful debut of Lovecraftian horror and Southern gothic menace, John Hornor Jacobs reveals the fragility of free will, the dangerous power of sacrifice, and the insidious strength of blood.

What:  One commenter will win a copy of Southern Gods.

What types of music do you listen to?
Please remember - if you don't answer the question your entry will not be counted.

Who and When: The contest is open to all humans on the planet earth with a mailing address. Contest ends at 11:59pm US Eastern Time on Wednesday, August 10, 2011. Void where prohibited by law.