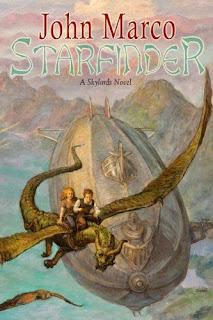 John Marco was born and raised in Long Island, NY. He worked as a technical writer before being published. In 1994, he started working on his first novel, and in 1999 his first book, The Jackal of Nar, was published in 1999. He has published eight novels to date with his ninth book, The Bloody Chorus (Bloody Chorus 1) coming out in November.

Starfinder was meant to be the first of a young adult series. It was published in 2009 as a hardback. It is still available in eBook and Mass Market Paperback. The publisher chose not to continue the series.

A new fantasy series from the author of The Sword of Angels.

Steam trains and electricity are rapidly changing the world. Moth of Calio is obsessed with the airships developed by his friend Fiona's grandfather Rendor, and dreams of taking to the air one day like his heroes, the Skyknights.

But not everyone is happy to see humans reach the skies. For thousands of years, the mysterious and powerful race known as the Skylords have jealously guarded their heavenly domain. But Moth and Fiona are about to breach the magical boundary between the world of humans and the world of the Skylords.

I've been a big fan of John Marco ever since I read The Jackal of Nar. I bought my copy of Starfinder when it came out. I didn't immediately read it, as I have a weird tick about reading ongoing series. I kept waiting to see if any additional books would be published and, over time, got caught up in reading other books. Once again, Retro Reviews has presented me with an opportunity to right my wrongs.

John Marco is a master of character creation and world building. It didn't take long before I became immersed in a sense of wonder reading Starfinder. I found more enjoyment reading this particular young adult novel than I have in most. It doesn't force you to relive teenage angst, but instead touches on those monumental events we all deal with in our youth. It reminded me of the excitement I found as a youth exploring fantasy worlds in literature—discovering new creatures and strange lands that can only live in imagination. Marco has built a world and characters that feel real while keeping the story short and simple enough to be inviting to any age.

Moth, the main character, is a young orphan boy. He lives with Leroux, a kind old Eldrin Knight who's part of an Order that's fading into history. He fills Moth's head with stories of adventures at night. By day, Moth works as a custodian at the airfield. Fiona is a girl a few years older than Moth and the granddaughter of Rendor, a man who invented air travel as the world knows it and aspires to even more. Even the villains are interesting as characters. Marco has a gift of making his villains relatable, and even hints that they might be redeemable. It makes me mourn for them rather than hate them, creating a more satisfying and realistic villain.

The world is split into two continents. One side is comparable to a European country set around the 17th Century. Marco brings in a wonderful twist by creating dragonflies—an early aircraft that looks more like an early helicopter, in my mind, with four glass wings on the top. There are also massive airships that look like over-sized zeppelins. These planes give the story a steam-punk feel, without any actual steam or gears being mentioned. There appears to be no magic on this half of the world. The other side of the world is all magic. It's a land of talking dragons, mermaids, and centaurs. We revel in the wonder of it all with Moth and Fiona as they discover this land. We also soon learn that on this side of the world, birds don't fly, the sky is left for the Skylord's and their slaves. The Reach is the only thing separating the two halves—an ocean of fog that's nearly impossible to cross. I loved the imagery of a ocean of fog rather than water separating two continents.

The overall storyline is a familiar quest story, but the added character depth and world building gave the story originality. The pacing is fast with short chapters, which made it hard for me to set it down, because I knew I could stay up just a little longer and read another chapter.

Since the book was supposed to be the first in a series, I was worried there would be a lot of unanswered questions, however Marco did a great wrap up to the story while still alluding to future stories. After finishing the book, I've tried to think up several ways in which I might be able to coax DAW into letting Marco finish the series. I think the only true way would be to bombard DAW headquarters with as many moths and dragonflies as possible until they beg Marco to finish the series. I'm just afraid PETA might get mad at me if I suggest this idea too strongly.

Starfinder is a wonderfully entertaining young adult fantasy book that was sadly published just before the big YA boom. I know it would have been a smash hit otherwise. Please don't let the fact that it's the first book in a series that may never be finished stop you from enjoying it. The story is complete and worth your time and money to read. It lives up to John Marco's talent and gift as a writer. There are a few minor moments of violence, but I have no problem recommending this book to teens or adults. If you're a fan of John Marco and haven't read this book, go buy a copy and add it to your collection. If you're a fan of fantasy and steampunk this is a great bridge between both genres. It's also a perfect way to remind yourself why you fell in love with fantasy in the first place. It's definitely a book I'll read to my kids once they get a little older.


Favorite quotes from the book

“The wind whistled as it swam between the towers, but not another voice reached them, not a single blinking eye.” page 142.

“Even if we had wings, some of us would be pigeons.” spoken by Rendor page 162.

“The drums were now silent; Moth could hear the wind rustling in the grass as he awaited Jorian's call. Tonight, he and Fiona would be warriors.” page 284.
Source: qwillery.blogspot.com
+ Sharelabels (5)Flag
AllBranniganDAWJohn MarcoRetro ReviewsStarfinder