Published:
Please welcome Stina Leicht to the The Qwillery as part of the 2011 Debut Author Challenge Interviews.

Stina:  My husband likes to call me a "Method Writer." That is, I prefer experiencing things before writing about them. Which means I do silly things like race outside when it snows so I can memorize what it feels like. (For the record, it doesn't snow much where I live.)

Stina:  Some of my favorite writers are Stephen King, Shirley Jackson, Neil Gaiman, Ray Bradbury, Terry Pratchett, Charles de Lint, and Holly Black. I like to think that Stephen King influenced me in that I'm a writer who likes to delve into the psychology of characters to provide motivation. Always felt that Stephen King did that very, very well.

TQ:  Describe Of Blood and Honey in 140 characters or less.

Stina:  "Of Blood and Honey" is set in 1970s Northern Ireland and is one part old school Urban Fantasy and one part gritty Irish Crime novel.

TQ:  What inspired you to write Of Blood and Honey?

Stina:  A nonfiction book called "Those Are Real Bullets: Bloody Sunday, Derry, 1972 by Pringle and Jacobson -- two British reporters who were present when British soldiers fired on unarmed civilians. Thirteen protesters were killed and a fourteenth died of injuries he received that day. One of my favorite things about Science Fiction and Fantasy is that it uses story to address sensitive subjects. After reading that book and watching what was happening in the USA, I felt Americans could and should learn a great deal from the mistakes the British made with the Irish during that time.

TQ:  Why did you set Of Blood and Honey in Ireland?

TQ:  What sort of research did you do to for Of Blood and Honey?

Stina:  I read a great deal about the Troubles and visited the University of Ulster's Conflict Archive online. (http://cain.ulst.ac.uk/) I interviewed people who'd lived in Belfast at that time, or had visited Derry during that era. I've been taking Irish language lessons for four years. (To help with the dialog structure.) Listened to Irish Crime novels written by Irish writers on audiobook. (Also to help with dialog structure.) And I took rally racing lessons.

TQ:  Without giving anything away, what is/are your favorite scene(s) in Of Blood and Honey?

Stina:  Oh, let's see. It's kind of packed with those, really. I like the scenes between Kathleen and Bran. I especially like when Liam meets Oran at the taxi association. The rally race was particularly fun to write. The scene where Mary Kate attempts to fend off Liam with a thermometer made me grin. And the scene where Father Murray goes all Yoda while talking to Liam toward the end is a favorite of mine too. Oh, and I have to include the scene where we first meet Haddock. He's the best bad guy I've ever written, I think, and that scene highlights his complexity.

TQ:  In Of Blood and Honey, who was the most difficult character to write and why? The easiest and why?

Stina:  I thought Haddock was pretty tough at first. Mostly because Americans are taught that cops are to be trusted and Haddock is definitely not one of those. Overcoming that was rough. But once I got through that, he was a breeze. He's a fanatic, you see. For him, the ends justify the means. The easiest character to write? That was Liam, I suppose. He's pretty easy for me to relate to. We're both dyslexic for a start.

TQ:  How many books are planned for the Fey and Fallen series?

Stina:  I prefer the way Terry Pratchett handles a series. Each book can stand on its own, and yet, they're related. So, off the top of my head... I know there's a third book, but beyond that, I don't know. There are other characters -- Liam's sister Moira for example -- that I'd like to expand on. We'll see if I get the chance.

Stina:  I've started a teen fantasy series set in a world with a Georgian era feel to it. We'll see how that goes. I'll be happy to write more about Liam and Father Murray, but I feel the need to do something else for a little bit. Writing about the Troubles is pretty stressful for me -- particularly since I've never been to Northern Ireland.


About of Blood and Honey 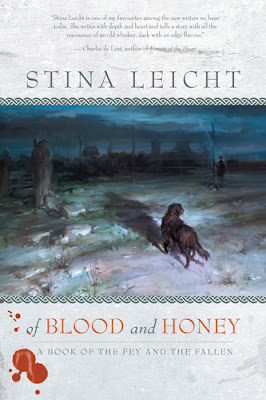 Fallen angels and the fey clash against the backdrop of Irish/English conflicts of the 1970s in this stunning debut novel by Stina Leicht.

Liam never knew who his father was. The town of Derry had always assumed that he was the bastard of a protestant--His mother never spoke of him, and Liam assumed he was dead.

But when the war between the fallen, and the fey began to heat up, Liam and his family are pulled into a conflict that they didn't know existed. A centuries old conflict between supernatural forces seems to mirror the political divisions in 1970s era Ireland, and Liam is thrown headlong into both conflicts.

Only the direct intervention of Liam's real father, and a secret catholic order dedicated to fighting "The Fallen" can save Liam... from the mundane and supernatural forces around him, and from the darkness that lurks within him. 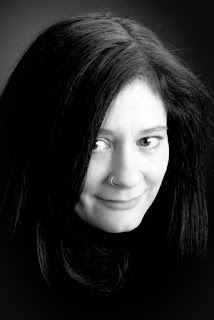 Stina Leicht was born in Missouri where she attended Catholic school, climbed trees, fought pirates and rescued her sister's dolls from terrible fates. Currently, she lives in central Texas with her husband. She's totally famous for singing too loud to punk music in her car, reading too much, taking photographs almost no one has seen, and making art out of wooden cigar boxes. In the course of her research, she has driven in rally races, taken Irish language lessons and studied Northern Irish politics. She still fights pirates but has traded her trusty wooden stick for a rapier and dagger. Of course, pirate ships being somewhat rare in central Texas, she makes do with a friend's back yard--which is fine since she gets stabbed quite a lot and would only end up tossed into the sea anyway.

What:   One commenter will win a copy of Of Blood and Honey generously provided by Night Shade Books.

Approximately how many books do you read per month?
Please remember - if you don't answer the question your entry will not be counted.

Who and When:  The contest is open to all humans on the planet earth with a mailing address. Contest ends at 11:59pm US Eastern Time on Friday, July 22, 2011. Void where prohibited by law.

27 Comments on The Qwillery: Interview with Stina Leicht and Giveaway - July 15, 2011