Interview with Jenn Bennett and Giveaway - May 2, 2012

Interview with Jenn Bennett and Giveaway - May 2, 2012

Published:
Please welcome Jenn Bennett back to The Qwillery. Summoning the Night, Arcadia Bell 2, was published on April 24, 2012.


TQ: Welcome back to The Qwillery!

Jenn:  Thanks for having me, Sally! Err, that sounded dirty, but you know what I mean.

TQ:  Yes, I do! :)  What do you wish you'd known when your first novel, Kindling the Moon (Arcadia Bell 1), came out that you know now?

Jenn:  Hmm, tough question. I suppose I wish I'd known how incredibly difficult it is to be a Published Author. This isn't the creative girl who dreams up brave new worlds, nor is it the disciplined artist who hammers out manuscripts while managing a caffeine addiction. It's the person who's expected to manage social media. To smile and act professional. The person who has to understand the advantages and disadvantages of a particular contract clause. I think the New Author Me freaked out about all those things. The Sophomore Author Me has learned to ignore it. I figure I can either be someone who blogs twice a week about the publishing business . . . or I can be a good writer. Some authors can do both. Hats off to them. Maybe one day I'll learn to juggle all of it, but right now, I'm content with plugging along on my current manuscript and just enjoying the ride.

Jenn:  Maintaining my confidence. When I'm happy and arrogant, I'm creative. When I'm doubting, say, why I chose to make the hero of my series 42 (after some eighteen-year-old blogger says old dudes are gross) then it all comes crashing down.

TQ:   Please tell us something about Summoning the Night (Arcadia Bell 2) that's not in the book description.

TQ:  Which character has surprised you the most in the Arcadia Bell series so far?

Jenn:  Probably Jupe. I knew I adored him when I created him. And I knew I was going to buck the rules by pushing a teenage kid as an interesting, vital part of the series. But I didn't expect the outpouring of Jupe fan mail—from people who are happy to see a biracial hero, to others who've told me he's so much like their own kid or a cousin or brother, or those who've said they swoon over his dialogue and can't wait until he's a few years older. It has been a wonderful, wonderful surprise.

TQ:  Which character in the series is most like you?

Jenn:  I'm a Jupe-Lon hybrid. Half the time, I'm bubbly and SUPER EXCITED ABOUT EVERYTHING. The other half, I'm a closed-off observer. My parents have told me that as a child, I vacillated between craving the spotlight and wanting to be left alone in my room so that I could read.

TQ:  The Arcadia Bell series is Urban Fantasy. Are there any other genres (or subgenres) in which you'd like to write?

Jenn:  LEASHING THE TEMPEST, Arcadia 2.5, is a special digital short novella starring Cady, Lon, Jupe, and Kar Yee. It comes out this Christmas. BINDING THE SHADOWS, Arcadia 3, releases next year, followed by Arcadia 4.

Jenn:  It's been an absolute pleasure, thank you! 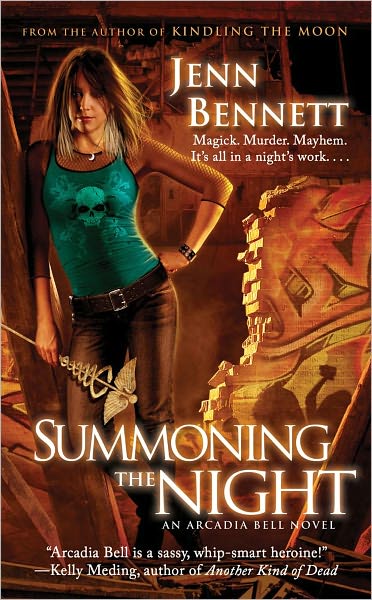 After narrowly escaping her fate as a sacrificial scapegoat, Arcadia Bell is back to normal. Or at least as ordinary as life can be for a renegade magician and owner of a tiki bar that caters to Earthbound demons. She’s gearing up for the busiest day of the year—Halloween—when a vengeful kidnapper paralyzes the community. The influential head of the local Hellfire Club taps Cady to track down the fiendish bogeyman, and now that she’s dating red-hot Lon Butler, the Club’s wayward son, she can hardly say no.

Cady and Lon untangle a gruesome thirty-year trail of clues that points to danger for the club members’ children. But locating the person behind the terror will require some metaphysical help from Cady’s loyal bar patrons as well as her potent new Moonchild powers—and she’d better figure it out before the final victim disappears and her own darkest secret becomes her biggest enemy. 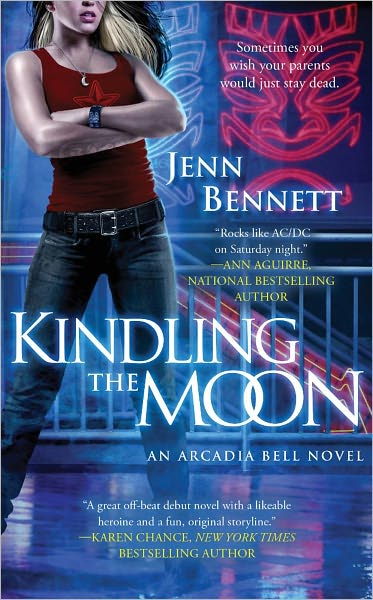 Jenn Bennett is an award-winning visual artist and author of the Arcadia Bell urban fantasy series from Pocket Books. Born in Germany, she’s lived and traveled extensively throughout Europe, the U.S., and the Far East. She believes rebellion is an under-appreciated art form, has conjured more demons than you’ve had hot lunches, and likes her fairy tales like she likes her coffee: dark. She currently lives near Atlanta with her film-geek husband and two very bad pugs.

Get weekly Facebook updates from Jenn by liking her fan page, or follow her on Twitter for daily dribbles about her current writing projects, the book industry, and miscellaneous obsessions, which include: all things foodie and cooking; early to mid-20th-century art and culture; mythology & fairy tales; games, board and video; music (from indie to Ella Fitzgerald to metal); movies (from foreign to horror to fantastical); hermetic and arcane studies; world travel; vintage flea market finds . . . and the occasional picture of her dogs behaving badly.

What:  One commenter will win his/her choice of Kindling the Moon or Summoning the Night from Jenn!  US/Canada ONLY.

Last Urban Fantasy novel you've read or what is your favorite genre?
Please remember - if you don't answer the question your entry will not be counted.

Who and When:  The contest is open to all humans on the planet earth with a US or Canadian mailing address. Contest ends at 11:59pm US Eastern Time on Wednesday, May 9, 2012. Void where prohibited by law. No purchase necessary. You must be 18 years old or older to enter.

30 Comments on The Qwillery: Interview with Jenn Bennett and Giveaway - May 2, 2012