Published:
Please welcome V.M. Zito to The Qwillery as part of the 2012 Debut Author Challenge Guest Blogs. The Return Man was published on April 1, 2012 by Orbit.

Logic for Dead People
I love comic books. And to love comic books, sometimes you have to throw real-world logic out the window. A megadose of gamma rays turns Bruce Banner into the Hulk? A cosmic space storm transforms four astronauts into the Fantastic Four? A radioactive spider-bite mutates Peter Parker into Spider-Man? Err... umm... sure, why not. In reality, they'd all die of horrible cancers and radiation poisoning. But on the comic page, we just accept it and move on. Don't ask too many questions, or else the entire concept crumbles. And what fun is that?

It's a lot like 'suspension of disbelief' -- the mental state necessary to enjoy fiction as a reader -- except it goes further, asking us to jump even wider gaps in believability.

I call this 'Comic Book Logic.' And I think it applies to zombies, too.

I realize this might be hard to accept. We live in an era of vast knowledge, constantly expanding our understanding of life, technology and the universe; even last month, scientists came closer to pinpointing the ever-elusive 'God particle' in subatomic physics. We crave answers. We want to take it all apart and see how shit works, because we're certain it's better to know.

In college, I was a biology major (although I never finished the degree); even today I'm still fascinated by the cogs and wheels that make life function. So you might think I'd be pretty eager to know exactly how a zombie works. I mean, we're talking about a dead body that gets up and walks around and tries to kill us. For that to be possible, a few things have to happen...

For example, which biological systems are still ticking below the clammy grey skin? Does the heart beat? If not, how do the muscles get energy without a steady blood supply? Does a zombie digest the people it eats? Does it poop? I have never seen a pile of zombie poop.

See what I mean? The more questions you ask, the more that follow, to the point of distraction. The trend today in zombie entertainment is to offer answers -- pseudo-scientific explanations that sound plausible enough, at least until you ask the next question -- but be careful. Comic books went through a similar stage in the 80s, when writers like Alan Moore and Frank Miller enforced 'reality rules' on their superhero characters and in the process almost killed them. Comic artist David Mazzuchelli said it this way: 'Once a depiction veers toward realism, each new detail releases a torrent of questions that expose the absurdity at the heart of the genre. The more "realistic" superheroes become, the less believable they are. It's a delicate balance...'

George Romero's 1968 film, Night of the Living Dead, launched the zombie apocalypse with Comic Book Logic, hinting that radiation (the Silver Age comic's greatest plot device!) from an exploding space probe may have caused the dead to rise. But even George realized that no explanation could possibly withstand the scrutiny of science, and in his follow-up Dawn of the Dead, he transcends logic entirely by issuing my favorite proclamation of all time:

'When there is no more room in Hell, the dead will walk the earth.'

Shazam! Theology trumps science. The zombie apocalypse is God's plan. Zombies can walk because God freakin' wants them to, okay? And to make sure we get the point, in Day of the Dead Romero explains that maybe God 'just wanted to show us he's still the Boss Man.'

In my novel THE RETURN MAN, I tip-toe to the edge of the 'scientific answer.' I couldn't resist; my inner biology student was curious, and the main character Henry Marco is a neurologist who would naturally be interested, too. But I also took George's advice to heart and backed off before taking a full flying leap to a conclusion. Ultimately, the only explanation for our beloved flesh-eating zombies is either an inscrutable God... or good old Comic Book Logic.

Which do you believe in? 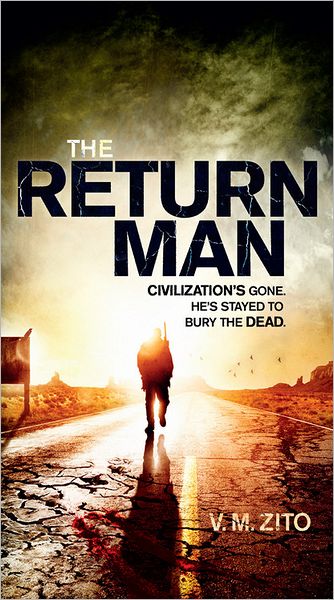 The outbreak tore the US in two. The east remains a safe haven. The west has become a ravaged wilderness, known by survivors as the Evacuated States. It is here that Henry Marco makes his living. Hired by grieving relatives, he tracks down the dead and delivers peace.

Now Homeland Security wants Marco for a mission unlike any other. He must return to California, where the apocalypse began. Where a secret is hidden. And where his own tragic past waits to punish him again.

But in the wastelands of America, you never know who - or what - is watching you. 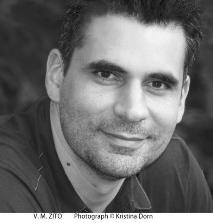 V. M. Zito resides in Connecticut, USA with his wife and daughter. When not writing, he spends his weekdays working as Creative Director at a New England ad agency and his weekends running on trails. THE RETURN MAN is his first novel.