Review: The Rule of Luck by Catherine Cerveny

Review: The Rule of Luck by Catherine Cerveny 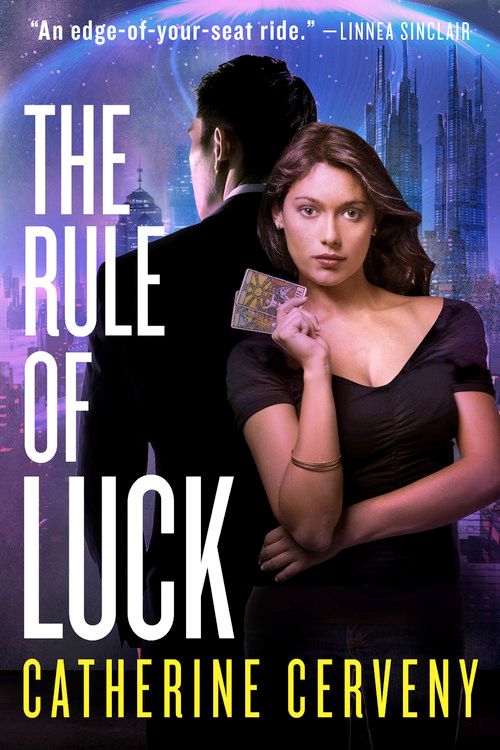 The Rule of Luck is a whirlwind thriller romance in a futuristic setting that will tug at your heartstrings while sending you on high-speed chases alongside a genetically-enhanced (and incredibly handsome...) criminal mastermind.
As a famed tarot card reader, all is well in luck and love for Felicia Sevigny, until Russian crime leader Alexei Petriv walks into her shop and demands a reading.

Petriv's future looks dark and full of danger, which wouldn't be Felicia's problem, except that it's also aligned with hers. Felicia discovers she is the key pawn in Petriv's plot to overthrow the all-knowing government, and she must decide if she will trust with him with her heart, body and soul, before the future of the entire human race collapses around her.

The Rule of Luck is Catherine Cerveny's debut novel. You can tell that Cerveny has spent a lot of time thinking about and creating her future Earth. The wordlbuilding is exceptional and is not bogged down by minutiae. Cerveny gives you everything you need to understand why this future Earth is the way it is and it's fascinating.

I truly enjoyed the two main characters Felicia Sevigny and Alexei Petriv. The are both interesting and flawed. They make a wonderful, if not expected, couple. Felicia is a Tarot Card reader who really can read the cards and give advice to her clientele. Cerveny also provides insight into the Tarot and the way the cards are read that helps the reader get into the mind of Felicia. Alexei is the heir apparent to the Russian criminal enterprise that exists on Earth. He is somewhat rigid and very in control. He has his weak spots though. Their relationship starts as a professional one and progresses to more. It's not an easy road for either of them, with both of them questioning everything. Their relationship builds slowly with some difficult bumps along the way. Both Felicia and Alexei grow emotionally over the course of the novel and you can't but hope they will somehow end up together.

In addition to being a romance, The Rule of Luck deals with issues of what happens after the Earth faces catastrophic natural disasters. How do you provide resources and not overwhelm the planet? There are also issues of posthumanism, ethical and not-so-ethical science, population control, cutting edge science, and more. This is a novel with depth and gives you much to think about while being a really engaging and exciting read.

Cerveny has deftly blended Science Fiction and Romance. The writing is crisp and the novel flows beautifully. There is plenty of action and thrills as Felicia gets drawn deeper into Alexei's plans. The Rule of Luck is a compelling read with engaging characters, a terrific story and a somewhat frightening portrayal of future Earth.
Source: qwillery.blogspot.com
+ Sharelabels (6)Flag
AllBook ReviewsCatherine CervenyFelicia SevignyRedhookThe Rule of Luckreview

Report "Review: The Rule of Luck by Catherine Cerveny"