Published:
Please welcome Alan Finn to The Qwillery. Things Half in Shadow was published on December 30, 2014 by Gallery Books. 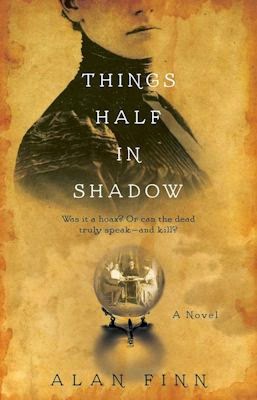 Alan:  I think I’ve always been a writer, in one form or another. My mother is a big reader, so I grew up surrounded by books. I also liked to tell stories. Apparently, as a child, I talked A LOT. So I was always reading, always making things up, always using my imagination. And reading was such a thrill for me. I loved falling so deep into a book that the real world faded away. Writing, to me, seemed like a very noble profession. I wanted to do for others what so many authors had done for me.

Alan:  I am a ridiculously detailed plotter. I can’t write a word unless I know where this whole undertaking is going to lead me. That doesn’t mean I don’t change directions midway, but I always need that well-plotted road map to get me started.

The biggest challenge for me is, well, the actual act of writing. I love plotting, revising and rewriting. But sometimes just facing that blank computer screen and knowing I need to fill it with thousands of words is very daunting to me. I envy those authors who can sit down and hammer out two-thousand words before lunch.

TQ:  Describe Things Half in Shadow in 140 characters or less.

TQ:  Tell us something about Things Half in Shadow that is not found in the book description.

Alan:  Notorious showman P.T. Barnum is a secondary character in the book. His character was a blast to research and write. And although it’s a fictionalized version of Barnum, I still used actual details about his life. With all the ghostly happenings in the book, I wanted a real-life character to ground everything in reality.

TQ:  What inspired you to write Things Half in Shadow? What appealed to you about combining a thriller with the supernatural and occult? Why did you set the novel in Philadelphia?

Alan:  I’m obsessed with weird history and strange tidbits from America’s past. Things Half in Shadow stems from a book I was reading—for fun, I should add—about tricks used by fake mediums. Many were so simple, but so ingenious, that I really wanted to include them in a novel. Everything else—characters, time period, plot—developed from there.

The supernatural aspect just grew out of the subject matter. I thought it would be cool to have a book with both fake mediums and real ones, staged séances and legitimate spirits. I wanted to keep the characters—and readers—guessing as to what’s fake and what’s supernatural.

As for Philadelphia, it’s a city of history. It can be glimpsed everywhere you go. And I thought there was no better location for a story about spirits and secrets from the past than the nation’s birthplace. As I write in the book: Philadelphia, as it would happen, is filled with spirits. All of that history colliding with the new and the now. Wherever the past piles up, layer after dusty layer, ghosts are sure to linger.

TQ:  What sort of research did you do for Things Half in Shadow?

Alan:  I made several trips to Philadelphia, which is always a treat. I really love that city. I toured some locations that are used in the book, such as Eastern State Penitentiary and Rittenhouse Square. I read a lot—books about Philadelphia, mediums, ghosts, life in the 1800s. I even found a 19th Century guidebook that describes all the sites to be found in Philadelphia. There was also a lot of looking at archived maps, which helped me use actual street names and take advantage of the city’s actual geography during that time.

Alan:  The easiest was Edward Clark, the newspaper reporter assigned to expose fake mediums in the city. He’s the narrator, looking back on the events fifty years later. Because of the first-person narration, it was very easy for me to craft his character and write in his voice.

The hardest character was his counterpart, cunning charlatan Lucy Collins. She’s a complex woman, that Lucy. She’s crafty, selfish and scheming, yet there’s something very charming about her. It was a challenge trying to strike the right balance. I didn’t want her to be too sweet or too salty. I needed to get the tone exactly right in order for readers to embrace Lucy in all her complicated glory.

TQ:  Give us one or two of your favorite non-spoilery lines from Things Half in Shadow.

When people mention Lenora Grimes Pastor, if they still speak of her at all, many insist that she was killed by a ghost.

That’s the opening line of the book, and I think it’s a very good indicator of what people should expect if they continue reading.

Alan:  Next is the follow-up to Things Half in Shadow. I really wanted to send Edward and Lucy on another adventure. After that is a present-day thriller. No ghosts. Just very dark people. 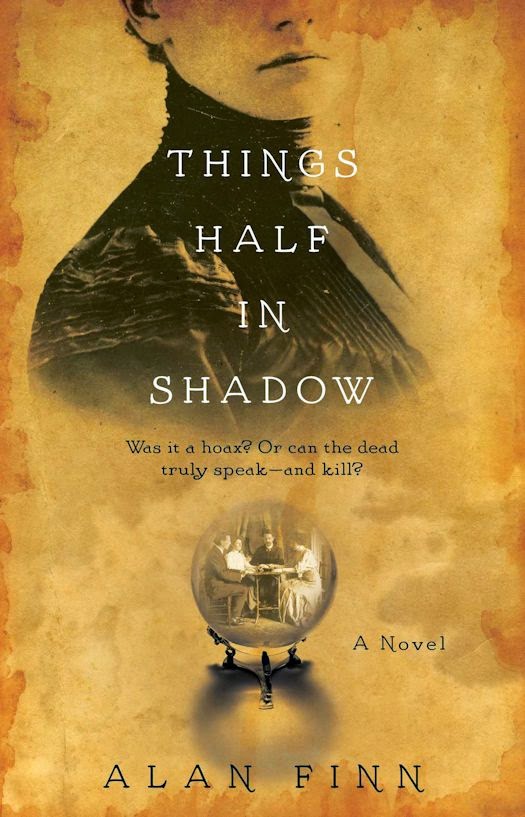 Postbellum America makes for a haunting backdrop in this historical and supernatural tale of moonlit cemeteries, masked balls, cunning mediums, and terrifying secrets waiting to be unearthed by an intrepid crime reporter.

The year is 1869, and the Civil War haunts the city of Philadelphia like a stubborn ghost. Mothers in black continue to mourn their lost sons. Photographs of the dead adorn dim sitting rooms. Maimed and broken men roam the streets. One of those men is Edward Clark, who is still tormented by what he saw during the war. Also constantly in his thoughts is another, more distant tragedy—the murder of his mother at the hands of his father, the famed magician Magellan Holmes...a crime that Edward witnessed when he was only ten.

Now a crime reporter for one of the city’s largest newspapers, Edward is asked to use his knowledge of illusions and visual trickery to expose the influx of mediums that descended on Philadelphia in the wake of the war. His first target is Mrs. Lucy Collins, a young widow who uses old-fashioned sleight of hand to prey on grieving families. Soon, Edward and Lucy become entwined in the murder of Lenora Grimes Pastor, the city’s most highly regarded—and by all accounts, legitimate—medium, who dies mid-séance. With their reputations and livelihoods at risk, Edward and Lucy set out to find the real killer, and in the process unearth a terrifying hive of secrets that reaches well beyond Mrs. Pastor.

Blending historical detail with flights of fancy, Things Half in Shadow is a riveting thriller where Medium and The Sixth Sense meet The Alienist—and where nothing is quite as it seems... 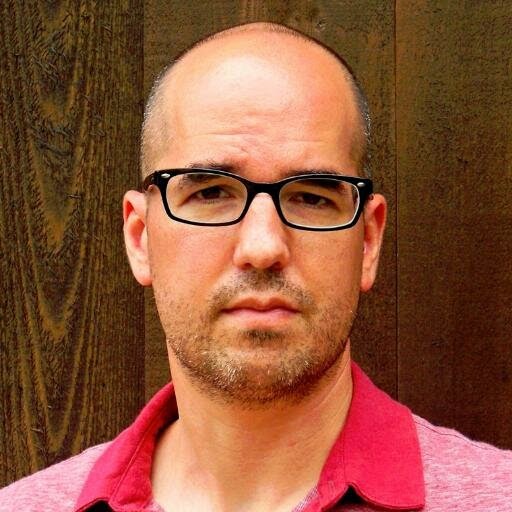 Alan Finn is the pen name of an acclaimed author of mysteries and thrillers. He has worked as an editor, journalist, and ghostwriter. He lives in Princeton, New Jersey.