Published:
Netflix has released the first teaser for Altered Carbon, it's upcoming SF series based on the novel by Richard K. Morgan. Altered Carbon is the first novel in Morgan's Takeshi Kovacs series. It was followed by Broken Angels and Woken Furies. Altered Carbon won the Philip K. Dick Award for 2003.

Based on the award-winning novel, Altered Carbon takes place in a future where the human mind can now be digitized and downloaded into a "cortical stack" and placed into new bodies, called sleeves.

The series follows Envoy soldier Takeshi Kovacs (Joel Kinnaman), who is brought back to life centuries later to investigate the attempted murder of Laurens Bancroft (James Purefoy), the wealthiest man on Earth. As the investigation progresses, Kovacs comes to learn that his past isn’t nearly as buried as he thought. 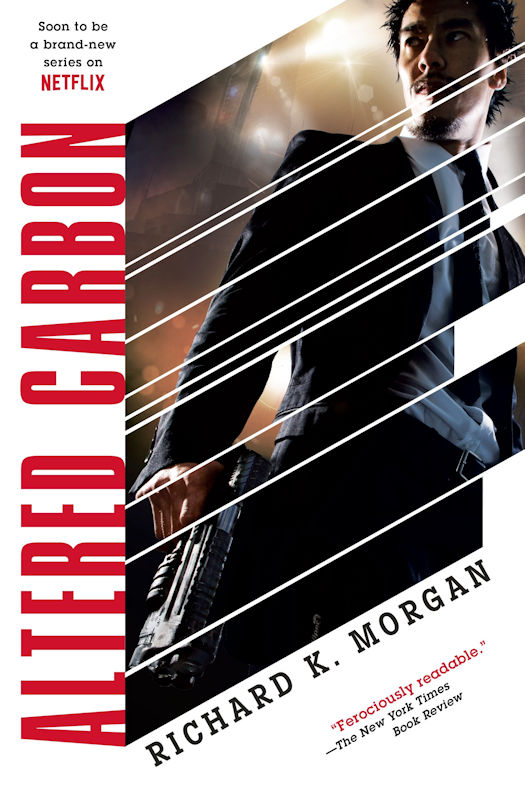 SOON TO BE A BRAND-NEW SERIES ON NETFLIX

In the twenty-fifth century, humankind has spread throughout the galaxy, monitored by the watchful eye of the U.N. While divisions in race, religion, and class still exist, advances in technology have redefined life itself. Now, assuming one can afford the expensive procedure, a person’s consciousness can be stored in a cortical stack at the base of the brain and easily downloaded into a new body (or “sleeve”) making death nothing more than a minor blip on a screen.

Ex-U.N. envoy Takeshi Kovacs has been killed before, but his last death was particularly painful. Dispatched one hundred eighty light-years from home, re-sleeved into a body in Bay City (formerly San Francisco, now with a rusted, dilapidated Golden Gate Bridge), Kovacs is thrown into the dark heart of a shady, far-reaching conspiracy that is vicious even by the standards of a society that treats “existence” as something that can be bought and sold. For Kovacs, the shell that blew a hole in his chest was only the beginning. . . .