The Qwillery | category: Between Dream Tour

Published:
Kerry Schafer’s urban fantasy novel doesn’t hit shelves until January 2013, but the author has something exciting to celebrate this month – the reveal of BETWEEN’s cover. And she’s not doing it in a small way either. Over five days, five different sites will post an image that shows a bit more of the cover each day until it’s revealed in its entirety Friday, September 21st on www.KerrySchafer.com. Kerry’s also running a tour sweepstakes this week giving away two (2) $25 Visa gift cards and a query critique from Knight Agency president Deidre Knight! With three separate prizes, there’s a better chance you’ll win big. Click here to enter! 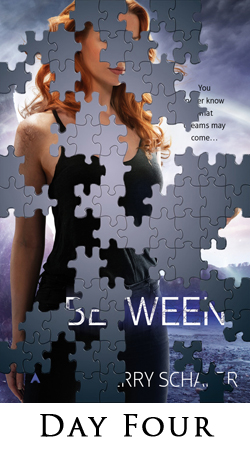 Vivian's life is finally on track. She has a job she loves as an ER doctor and has just met - literally - the man of her dreams. But when her eccentric grandfather is murdered and designates her as his next of kin, she discovers that she is the last of a race of beings known as dreamshifters. It is her task to guard the doorways between waking and dreaming, which have already begun to unravel, spilling dangerous creatures from dream into the waking world. When she sets out to close the open doors and protect her town and the people she loves, Vivian confronts dragons, intrigue, and the dark secrets of her own family history. In the end she comes face to face with a sorceress seeking eternal life and ultimate power. Vivian must find a way to stop her, or reality will be forever altered.

The theme for Day Four of the BETWEEN Dream Tour is penguins. Vivian was given a penguin pendant by her grandfather to wear around her neck as protection. Dream imagery wisdom say that seeing a penguin in your dream shows that your problems might not be as serious as you think. Have any of your dreams ever given you some relief about a situation you thought was bigger than it actually was?

Follow along as the cover is revealed on the following sites:

Pre-order BETWEEEN at Amazon, Barnes and Noble, Books-a-Million, or IndieBound. You never know what dreams may come…