Review: The Doctor and the Dinosuars (A Weird West Tale 4) by Mike Resnick 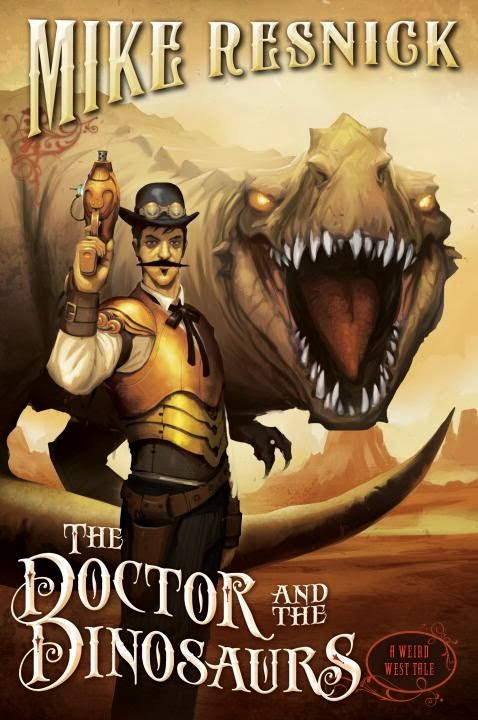 The time is April, 1885. Doc Holliday lies in bed in a sanitarium in Leadville, Colorado, expecting never to leave his room again. But the medicine man and great chief Geronimo needs him for one last adventure. Renegade Comanche medicine men object to the newly-signed treaty with Theodore Roosevelt. They are venting their displeasure on two white men who are desecrating tribal territory in Wyoming. Geronimo must protect the men or renege on his agreement with Roosevelt. He offers Doc one year of restored health in exchange for taking on this mission.

Welcome to the birth of American paleontology, spearheaded by two brilliant men, Edward Drinker Cope and Othniel Charles Marsh, two men whose genius is only exceeded by their hatred for each other's guts.

Now, with the aid of Theodore Roosevelt, Cole Younger, and Buffalo Bill Cody, Doc Holliday must save Cope and Marsh not only from the Comanches, not only from living, breathing dinosaurs, but from each other. And that won't be easy.

The story starts out with Doc Holliday a day away from death when his friend Geronimo shows up needing his help. Two paleontologists are digging on the Comanche’s sacred burial ground in Wyoming, and the Comanche medicine men are making plans to resurrect the very dinosaurs the professors are digging up back to life. Doc agrees to help if Geronimo restores his health. Doc makes his way north to Wyoming and along the way runs into his friend Theodore Roosevelt and Thomas Edison, and together they devise a plan to stop the digs. Unfortunately for Doc, the Comanche lose their patience and unleash a horde of dinosaurs on the two dig sites and it's up to Doc and his friends to save the paleontologists and the west from living rampaging dinosaurs.

I grew up in Wyoming, and growing up in Wyoming means you learn a lot about the Wild West in school and by watching and reading Westerns. So, when I saw a book promising the wild west with a mixture of steampunk, I couldn't resist reading it. The cover promises a nice blend of pulpy goodness, with Doc Holliday brandishing a steampunk pistol and a T-rex in the background. What more could I want?

This is the fourth book in the Weird West Tale series, and I've not read any of the prior books. The characters make a few minor comments of past adventures, but I didn't ever feel like I missed out by not reading them. Mr. Resnick does a great job giving the reader all the information we need to enjoy the story and enough of a tease to entice the reader to seek out his other books. I found the story premise to be very imaginative and his portrayal of the historical figures spot on. In fact, I had more fun reading his nine appendixes at the end of the book than the actual story. I think Mr. Resnick should write a few non-fiction books on the west. The only complaints I have are the pacing and the lack of character development. The first half of the book has a slow pace. Once the dinosaurs arrive, (I hope that's not a spoiler, but come on we all knew and hoped they would) the pacing speeds up and the last half of the book is a great ride. Since there are no original characters there is only so much character development that can take place within the book. If he would have added one original character to the series, he could have shown growth by being able to change at least one character throughout the series.

There is violence, but not graphic (we're dealing with gunslingers, mad Indians and killing dinosaurs), a brief implied sexual encounter, and a few instances of strong language (it is the wild west after all), but they are not graphic or frequent.

Even with the slow start and lack of character development, the accuracy in historic research is enough to tempt me into reading more of the series. I would recommend The Doctor and the Dinosaurs to any reader who enjoys old pulp science-fiction, genre blending, and even historical fiction, as the series is 80% historical fiction with 20% Sci-Fi.

Please welcome Brannigan Cheney to The Qwillery team. You may read more about Brannigan at the "About Us" page.