The Qwillery | category: By the Blood of Heroes

Interview with Joseph Nassise, author of The Jermiah Hunt Chronicles, and Giveaway - November 27, 2012

Published:
Please welcome Joseph Nassise to The Qwillery. King of the Dead, the second novel in The  Jeremiah Hunt Chronicles, is published today. 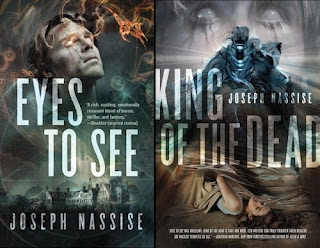 Joseph:  I don’t write my novels in order. In other words, I don’t write chapter one then chapter two then chapter three and so on. I plan extensively ahead of time, so that I know what is happening in each and every chapter and then I write whatever chapter appeals to me at the start of a writing session.

Joseph:  Most definitely a plotter. I don’t begin writing until I know exactly where the book is going to go. I find the other process unfathomable. I wouldn’t begin building a house without knowing what I want it to look like down to the last detail. I don’t see books as being any different.

Joseph:  Staying focused, I guess. My attention can wander easily and it takes discipline for me to sit down and focus for several hours in a row.


TQ:  What inspired you to write the Jeremiah Hunt Chronicles?

Joseph:  I wanted to write a dark urban fantasy about ghosts essentially. I started with the character of Jeremiah Hunt and his two ghostly companions, Whisper and Scream, then worked backward from there. Once I knew how Hunt saw the ghosts that surround him, the rest of the story fell into place.


TQ:  How did you choose Jeremiah Hunt's name?

Joseph:  Just plucked it out of thin air, to be honest. That’s how all my character names come to me.


TQ:  What sort of research did you do for the Jeremiah Hunt Chronicles?

Joseph:  I dug into a lot of things for the Chronicles – the history of various places, including Boston, New Orleans, and Los Angeles.; what daily life is like for the blind; ghosts and the ways to banish them, famous historical ghosts. Life in New Orleans after Hurricane Katrina. The list goes on.


TQ:  Why did you choose to write the Jeremiah Hunt Chronicles as 'hidden world' urban fantasy?

Joseph:  I wanted to examine the idea that there is another world just beyond ours, just out of reach, so to speak. Laying an otherworldly ghostly realm on top of our own allowed me to play with that concept a bit. It also helped tied the world of Jeremiah into the world of the Templar Chronicles (another series) because the two share several characters.


TQ:  You've set Eyes to See in Boston and King of the Dead in New Orleans. Why did you pick those particular cities?

Joseph:  I picked Boston because I was very familiar with the city – that’s where I grew up. Boston is a city rich in history and full of ghostly tales, so it fit very nicely into what I was looking for setting wise. I chose New Orleans because I wanted a place where there was a residue of strong emotion, as that would play a part in the plot of KING OF THE DEAD. Given everything that had happened in the city, both historically and in the aftermath of Hurricane Katrina, I thought it was an ideal location for book two.


TQ:  In the Jeremiah Hunt Chronicles so far, who was the easiest character to write and why? Hardest and why?

Joseph:  Jeremiah was the easiest, actually. His obsessive search for his daughter is something that I could understand intimately and I was able to slip into his character without difficulty in that regard. Jeremiah also happens to be the hardest character to write, because of his deep isolation and real disregard for the people around him when book one, EYES TO SEE, opens.


TQ:  Tell us something about King of the Dead (The Jeremiah Hunt Chronicles 2) that is not in the book description.

Joseph:  Hmmn, let’s see. Readers will learn more about the history between Denise Clearwater and Dmitri Alexandrov before the book is over.


TQ:   Without giving anything away, what is your favorite scene (or scenes) in King of the Dead?

Joseph:  There is a scene near the end of the book that requires Hunt to carry out a single act that will have major repercussions in the future for him and those around him. I think I did a good job pulling out the emotion in that scene.

Joseph:  What’s next? Well Jeremiah Hunt #3 of course! I’m putting the final touches on WATCHER OF THE DARK next month and then it will be off to production. Hopefully I’ll be able to do more books featuring Jeremiah and his companions after that as well.

I’m also knee deep in a new series for HarperVoyager called The Great Undead War. It is an alternate history series set in World War One featuring steampunk and zombies. Yes, I said zombies. It has been great fun to write and I’ve just finished up book two, ON HER MAJESTY’S BEHALF, which will be out in June. 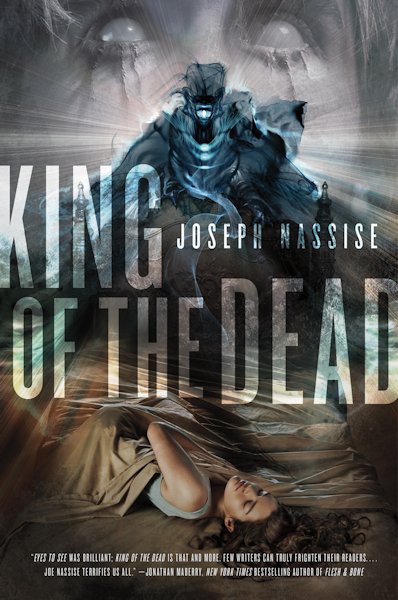 Joseph Nassise shook up the urban fantasy genre with Eyes to See, a novel New York Times bestselling author Jonathan Maberry called “heartbreaking, deeply insightful, powerful and genuinely thrilling.” In a devil’s deal, Jeremiah Hunt sacrificed his human sight in exchange for the power to see the hidden world of ghosts and all of the darker spirits that prowl the streets. Hunt uncovered a world of murder and magic that took his daughter from him and nearly cost him his life, but that was only the beginning....

Now Hunt is on the run from the FBI, who have pegged him as a mass-murdering dark sorcerer. His flight from the law is diverted to New Orleans when his companion, a potent witch, has a horrific vision of the city under magical siege. When they arrive, they realize that the situation is more dire than they could have imagined: the world of the living faces a terrifying attack by forces from beyond the grave. King of the Dead, the second book in this groundbreaking series, promises more of Nassise’s electrifying writing that will enthrall readers looking for a supercharged, supernatural thrill. 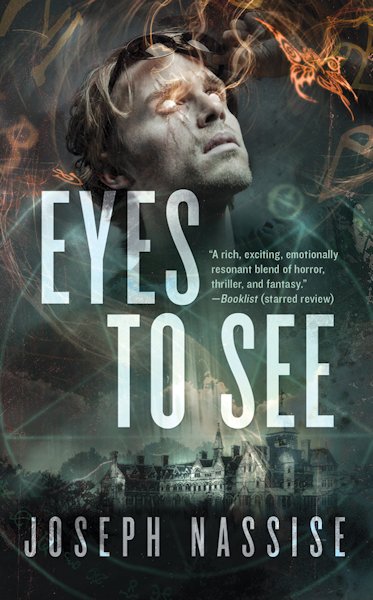 In Joseph Nassise's Eyes to See, an urban fantasy that charts daring new territory in the field, Jeremiah Hunt has been broken by a malevolent force that has taken his young daughter and everything else of value in his life: his marriage, his career, his reputation. Desperate to reclaim what he has lost, Hunt finally turns to the supernatural for justice.

Abandoning all hope for a normal life, he enters the world of ghosts and even more dangerous entities from beyond the grave. Sacrificing his normal sight so that he can see the souls of the dead and the powers that stalk his worst nightmares, Hunt embarks upon a strange new career—a pariah among the living; a scourge among the dead; doomed to walk between the light of day and the deepest darkness beyond night.

His love for his departed daughter sustains him when all is most hopeless, but Hunt is cursed by something more evil than he can possibly imagine. As he descends into the maelstrom of his terrifying quest, he discovers that even his deepest fears are but prelude to yet darker deeds by a powerful entity from beyond the grave…that will not let him go until it has used him for its own nefarious purposes.

By the Blood of Heroes
The Great Undead War 1
HarperVoyager, May 1, 2012
Trade Paperback and eBook, 352 pages 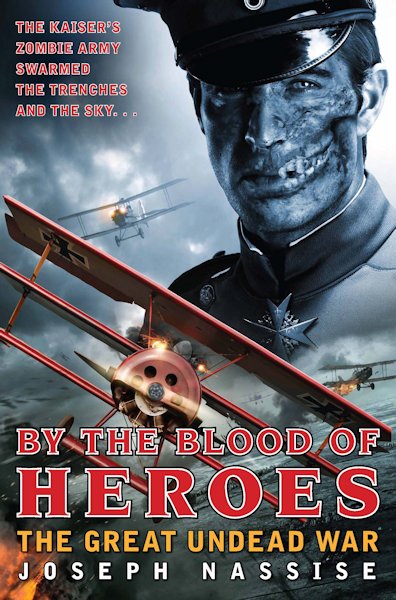 At the tail end of 1917, the Germans introduced a new type of gas to the battlefield, T-Leiche, or "corpse gas," and changed the face of the war by resurrecting the bodies of the dead, giving the enemy an almost unlimited source of fresh troops.

When the American ace Major Jack Freeman—poster boy for the war against the Kaiser's undead army of shamblers—is downed over enemy lines and taken captive, veteran Captain Michael "Madman" Burke is the only man brave and foolish enough to accept the mission to recover Freeman. Burke assembles a team of disparate members, from his right-hand man, Sergeant Moore, to big-game-hunter-turned-soldier Clayton Manning, who funds the mission for an opportunity to confront this most dangerous zombie game, to professor Dan Richards, one of Tesla's top men and the resident authority on all things supernatural. With the help of a highly advanced British dirigible war machine to infiltrate enemy territory, the team faces incredible danger as it struggles to reach the prison camp and strike at the heart of the enemy.

But they are pitted against the most deadly enemy of all: Manfred von Richthofen, the Red Baron. Having risen from the dead with his abilities enhanced but his mind on the brink of madness, Richthofen has plans for victory that give no quarter to soldiers or civilians. 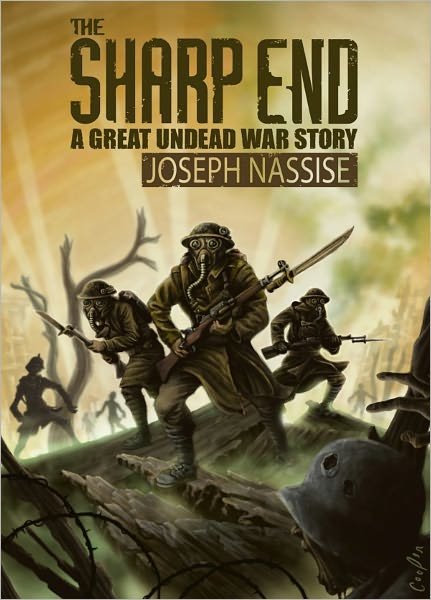 March 1921. The War to End All Wars continues, with no foreseeable end in sight. The Central Powers control most of Europe, with only a thin stretch of French coastline still in Allied hands. A beleaguered Britain fights resolutely on, but everyone knows that without the continued support of the United States it would fall within weeks. Even that may not be enough to defeat the brilliance of the Central Powers’ scientists and the advantages their weird science gives to their troops as wave after wave of zombie troops are sent against the Allied front lines...

On May 1st, 2012 HarperVoyager will publish BY THE BLOOD OF HEROES, the first book in the new zombie steampunk alternate history series known as The Great Undead War by internationally bestselling author Joseph Nassise.

Here, for the first time, is the story behind the story. Follow the hero of The Great Undead War series, Captain Michael "Madman" Burke, leader of Burke's Marauders, in the early days of the war, when the Germans are just beginning their field tests of a new weapon.

A weapon that will eventually come to change the face of the war itself, that will resurrect the bodies of the dead, both friend and foe alike, and turn them into flesh-eating monsters. A weapon that will come to be known as corpse gas. 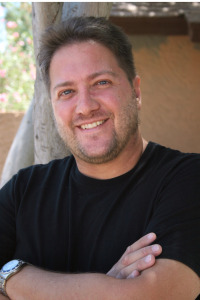 Joseph is the author of more than a dozen novels, including the internationally bestselling TEMPLAR CHRONICLES series, the JEREMIAH HUNT trilogy, and the forthcoming GREAT UNDEAD WAR series. He's also written several books in the popular Rogue Angel action-adventure series.

His work has been nominated for both the Bram Stoker Award and the International Horror Guild Award and been translated into half a dozen languages to date. He has written for both the comic and role-playing game industries and also served two terms as president of the Horror Writers Association, the world’s largest organization of professional horror and dark fantasy writers.

What:  One commenter will win a Mass Market Paperback copy of Eyes to See (The Jeremiah Hunt Chronicles 1) from The Qwillery.

Where (town, city, etc.) was the last Urban Fantasy novel you read set?
Please remember - if you don't answer the questions your entry will not be counted.

Who and When:  The contest is open to all humans on the planet earth with a mailing address. Contest ends at 11:59pm US Eastern Time on Tuesday, December 4, 2012. Void where prohibited by law. No purchase necessary. You must be 18 years old or older to enter.