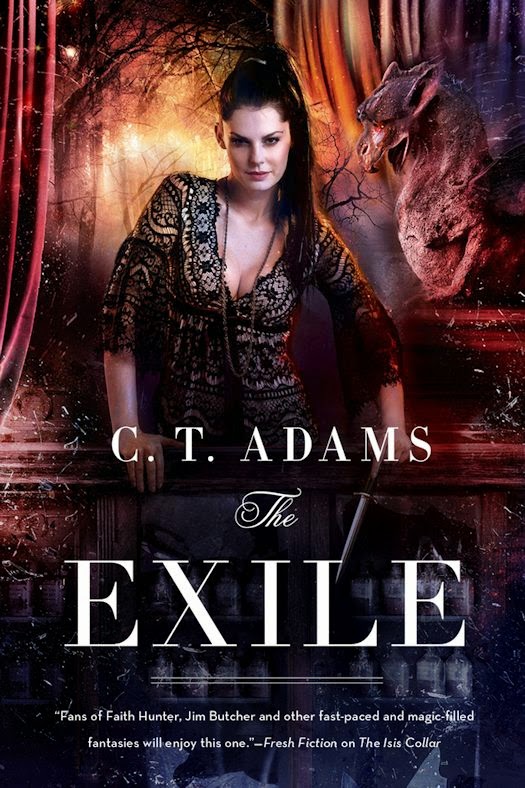 Brianna Hai runs an occult shop that sells useless trinkets to tourists--and real magic supplies to witches and warlocks. The magical painting that hangs in Brianna's apartment is the last portal between the fae and human worlds.

A shocking magical assault on her home reveals to Brianna that her father, High King Liu of the Fae, is under attack. With the help of her gargoyle, Pug, her friend David, and Angelo, a police detective who doesn't believe in magic, Brianna recovers what was stolen from her and becomes an unwilling potential heir to the throne.

A suspenseful urban fantasy with a hint of romance, The Exile is the first solo novel by C. T. Adams, who is half of USA Today bestselling author Cat Adams. Like the Cat Adams Blood Singer novels, The Exile is set in a world where magic is real and contains Adams's trademark blend of suspense, action, humor, and strongly emotional writing.

The Exile centers on Brianna Hai and her unique position as a child of two worlds. Brianna is the product of a relationship between her human mother and her Sidhe father and possesses both human and Fae magic. Brianna’s father is not a mere Sidhe; he is King Leu, the High King of Faerie. Years ago, Brianna’s mother was exiled from the realm of Faerie and Brianna chose to accompany her and live in the human world. Her mother, a skilled practitioner of magic, died several years ago, but Brianna chose to stay since day to day life in Faerie was complicated and she had no interest in the deceptions, the cruelty, or the assassination attempts that are the norm there. Although she misses her father, she has no wish to inherit her father’s throne, believing her full-blooded Sidhe siblings are much better suited for that. A surprise raid through the last portal between worlds by a group of vicious doxies (magical green bat like creatures with teeth like razors) force Brianna, her friend and employee David and his brother Nick along with Pug, a living gargoyle, to cross into the world of Faerie and the group finds themselves in the midst of a treacherous and dangerous bid for the throne.

This page-turning fantasy is so action-packed and exhilarating, I finished it quickly. I found the author’s world of Faerie fascinating and especially enjoyed the intrigue surrounding King Leu. Brianna was likable as were the eclectic cast of characters that supported her. The story, filled with doxies, dragons, pixies, trolls, gargoyles, and Sidhe along with humans make each encounter exciting, fresh, and interesting. The plot is pretty straightforward; the King must appoint an heir but is unsure which of his children he can trust to be a strong monarch in this time of impending war, but it is the treachery seemingly around each corner that made it fun for me to read. Although there are multiple POV’s I feel they serve the telling of events well and think the story flows at a great pace.

The Exile is the first solo novel by C. T. Adams and I thoroughly enjoyed it. Adams strikes just the right notes with wry humor, great action sequences, a suggestion of a future romance, and interesting characters. It’s an easy read and I would recommend it for anyone who enjoys urban fantasy. If you are looking for a wild, highly entertaining ride into the world of Faerie, The Exile is definitely worth the trip.


Note:  The King's name is spelled Liu in the book description, but Leu in the novel.
Source: qwillery.blogspot.com
0 Comments+ Sharelabels (7)Flag
AllBook ReviewsBook of the FaeC. T. AdamsThe ExileTor Booksreviewtrinitytwo 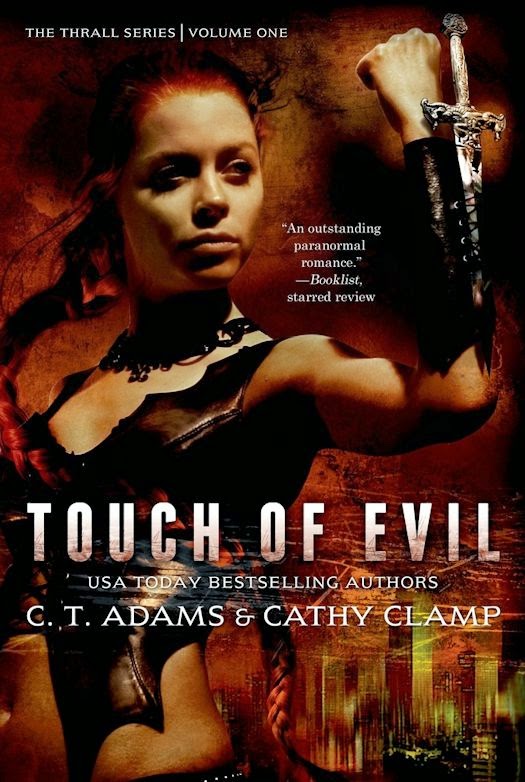 The USA Today bestselling first volume in the Thrall series, for the first time in trade paperback

The alien vampires known as the Thrall classify most humans as Prey, save for a few who survive the bite of the parasite. People like Kate Reilly, whose latent psychic powers were activated by the vampire's venom when she was attacked a few years ago. Kate is Not Prey, and safe.

Or is she? The Thrall Queen intends to make Kate her successor, despite Kate's hatred of the vampires.

All is not bleak in Kate’s world. Her downstairs neighbor, Tom, is a hunky firefighter who arouses her senses…including the ones that tell her he's not human. Tom’s a werewolf—and his pack knows how to protect Kate from the Thrall Queen. The problem? The last time Kate trusted a man she loved, he betrayed her to the Thrall and nearly got her killed.

Action, adventure, romance, and thrills—everything readers want from the USA Today bestselling authors who are also Cat Adams, creator of the Blood Singer series—are all on display in Touch of Evil.

This is a great series! It has everything I love: a kick-ass woman, a complex world, and complex history. Adams and Clamp have reimagined what a vampire is: a parasite with a hive mind. So cool! I love when authors take something familiar and turn it on its head! (They’ve also reimagined werewolves too!) Kate Reilly, a former pro volleyball player turned landlord and air courier is the best new fiction character out there! She is strong, capable, and not afraid to get her hands dirty. Kate’s status is officially Not Prey. This means a few things: the Thrall cannot lie to her and must treat her as an equal, she cannot fight with a gun only, and cannot hide or run from a challenge. If she does not abide by these rules she will lose her Not Prey status.

Kate’s new tenant, named Tom is a werewolf. The two are attracted to each other but it’s not just that…they respect and admire each other too. Tom is an awesome character and is the perfect foil for Kate. He doesn’t rush in and try to rearrange her life, doesn’t try to save her from her problems. He just loves her. As Kate and Tom’s relationship deepens, we learn the dynamics of these unique werewolves. Not only does Kate have Tom calling her, but her ex is also calling her, wanting her to find his niece. (The ex that Kate tried to save from the previous Thrall Queen. This ex, Dylan, is now a Thrall Host.) Kate accepts the job, and that’s when all hell breaks loose.

There isn’t a dull moment in this book and I can’t wait to read the next book in the series. Hats off to Adams and Clamp! They've produced a totally unique story. I can’t wait to see what happens to Kate in Touch of Madness!
Source: qwillery.blogspot.com
2 Comments+ Sharelabels (8)Flag
AllBook ReviewsC. T. AdamsCathy ClampStaceyThrallTor BooksTouch of Evilreview