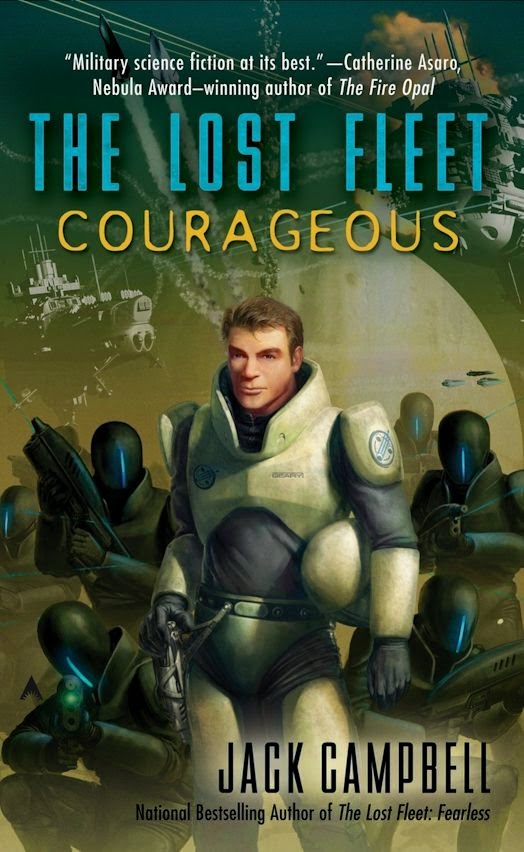 Jack Campbell is an pseudonym for John G. Hemry. John G. Hemry is a retired U.S. Navy Officer and a son of U.S. Navy officer, who was a mustang, a Navy term that describes an enlisted sailor who rises in rank to become an officer. Hemry spent his childhood traveling the globe as his father served in the Navy (Florida, California and Midway Island to name a few). He graduated from the U.S. Navy Academy in 1978. He learned Russian from a relative of Tolstoy. He currently lives in Maryland with his wife and three kids. Hemry is also a member of the SFWA Muskateers. Hemry's first published story was "One Small Spin" in Analog Magazine, September 1997 issue. Hemry's first published novel is Stark's War, April 2000 (written as John G. Hemry). He has written twenty-one novels to date.

The first book in the Lost Fleet series, Dauntless, was published in 2006. There are six books in The Lost Fleet series. A newer series that ties in with it called The Lost Fleet: Beyond the Frontier currently has four books (a fifth will be published in May 2015). The Lost Stars series also takes place in the same universe, but from the view point of a different main character, and presently consists of three books.

Badly damaged and low on supplies, the Alliance Fleet is raiding Syndic mines for raw materials--and Captain "Black Jack" Geary hopes they can continue to remain one step ahead of their enemies. But the Syndics are the least of Geary's worries when he learns of the existence of aliens with the power to annihilate the human race.

I picked up my copy of Courageous on a whim at my local used bookstore about a month ago mostly because I liked the cover, and I enjoy military science fiction more than any other sub-genre. It wasn't until I got home that I noticed it was book three in a series, which can be a daunting read. I have never read anything by Jack Campbell and I hate reading books out of order because I can never be sure how lost I'm going to be in the story or how long it'll take to get into the book. Campbell quickly put my mind at ease. Within a few pages, I knew all the basics of what was going on and even some clues as to what had happened before. All the major key points in the story were explained clearly and even the characters were introduced with enough information from the get go to keep the confusion down to a minimum.

Courageous has a wonderful pacing and description that made me feel like I was on the space ship Dauntless with Captain John “Black Jack” Geary, a futuristic mix between Rip Van Winkle and King Arthur, as he struggles to find a safe way home in enemy space. Campbell eludes to the past history of the Navy as far back to ships powered by sail, which adds a nice romantic touch to the past that blends well with futuristic ships in space.

At the heart of the story, Courageous is a chase book—Captain Geary commands a fleet of alliance spaceships that are being attacked by enemy ships at every turn. Campbell shines as he explores the reality and drama of everyday military ship life. While there are great battles between the warring ships, there's more drama in the struggle to keep the fleet up and running and working as one.

Captain Geary is an interesting character, a man who awoke to find himself in the future and called to lead. He struggles with the myth of who he was prior to his sleep and who he truly is. At times he takes advantage of his myth, but for the most part he almost forces himself to reject this “Black Jack” who everyone loves. Campbell does a masterful job of exploring this topic and the struggle. The supporting cast is well developed and helps balance out the story.

It's a straight-forward science fiction novel with future technology in a human-only universe—so far. The book hints there may be an alien civilization lingering on the edge of the universe. None of the technology is mind-blowingly different than what you'll find in other science fiction books, but I did enjoy some of the military tech used in the battles.

My only criticism would be that at times I felt a little bogged down in the descriptions of the actual directions the ships were going in the midst of the battles. I feel this is more my fault as I have little understanding of navigation, however it does add a sense of realism. The only other complaint I have is I would have liked to know the characters better by the end of the book. I was thoroughly engaged in their struggles, but I don't feel as if I know them personally that well. Granted, this is book three in a six book series so there's a chance the characters were established more fully in the previous two books.

Courageous is a top-notch military sci-fi novel with a heavy emphasis on the Navy. There's plenty of realism mixed with future tech. I found the struggles engaging and the end of the story rewarding. There are plenty of great battles and thought-provoking ideas to keep anyone entertained. As it is a military novel, there is violence but nothing graphic, light to no language and only implied adult situations so I can recommend it to teen and adult readers. This is definitely a book to check out at the library or borrow from a friend. If you enjoy it, you should have no problem finding the rest of the books in the series. I enjoyed myself so much that I'll be keeping my eye out for more books in the series on my next trip to the bookstore.

“Not gladly, not embracing death as some key to heroic salvation, but because she knew others would be counting on her. In the end, that was what it was all about. Do what was needed for those counting on you, or let them down.” Captain Geary thinking about Captain Dejani and the crew of the Dauntless. p. 273
Source: qwillery.blogspot.com
0 Comments+ Sharelabels (8)Flag
AllAceBook ReviewsBranniganCourageousJack CampbellRetro ReviewsThe Lost Fleetreview