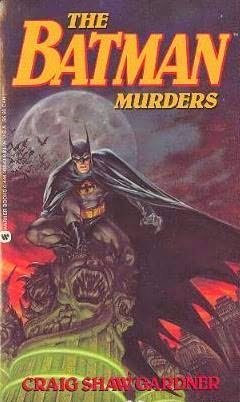 Craig Shaw Gardner was born in 1949 in Rochester, NY, and was raised there as well. Gardner graduated from Boston University. He sold his first short story in 1977 and his first novel, A Malady of Magicks, was published in 1986. He has written 35 novels so far. Gardener also wrote the novelization for the Batman movie in 1989, which spent time on the New York Bestsellers list.

A banker, missing for months, finally turns up dead - wearing the unique costume of the Caped Crusader. Three other prominent Gotham City citizens are also missing, and the only clue to their abductor's plot is a calling card - a joker with a bullet hole through it. It's only the beginning of the ultimate prankster's devastating new scheme to destroy the real Batman, even if he's got to spill the blood of everyone in Gotham City to do it. If the Joker succeeds, it will be his greatest gag of all time. But only one very twisted and very dangerous man will be laughing...

I've been a fan of Batman since I saw my first Batman cartoon in the late 70s. I read the novelization of the Tim Burton Batman film after watching and falling in love with the film as 13-year-old boy. Since then I've always kept my eyes open for other Batman fiction outside of the regular comic format. Some are great and others fall very flat. Sadly, this book was one of the latter.

I can see how writing Batman can be a hard thing to do. To do it right you have to really get into the character's mind and understand his motivation for doing what he does. If the author can make the readers feel like they are in Batman's head, it's a great book. If the author doesn't do this properly, he can still salvage the story by presenting Batman with an interesting challenge or villain, and, at the very least, have Batman do some cool stuff.

In this book, Batman and Joker both come across as boring and one dimensional. Gardener tries to bring some emotion to Batman by having the story take place just after the second Robin is blown up by the Joker, giving him reason to be mad or in mourning, but none of the emotion feels real. I think Gardner picked the hardest villain to do right. If a reader is going to spend anytime inside the mind of the Joker, they should leave scared, confused and a little amused. The Joker acted more like a birthday clown that had performed at one too many kid's birthday parties.

The story itself was full of holes and had no wonder or mystery to it. Gardner, had the habit of telling instead of showing, over and over again. I think the success of the novelization made the studio greedy and demanded a second book without bothering to actually have a story worth writing or reading. There are no issues with violence, adult situations, and little language so it would be safe for teens or adults to read. However, this is definitely a book to pass on if you see it anywhere. Even for those of you who want to own every bit of Batman merchandise you can, just let this one go.
Source: qwillery.blogspot.com
0 Comments+ Sharelabels (4)Flag
AllBranniganCraig Shaw GardnerRetro ReviewsThe Batman Murders