Published:
The Qwillery is extraordinarily thrilled to welcome Michael J. Martinez and Paul Weimer to The Qwillery discussing Paul's trip Down Under! The Qwillery highly recommends Paul's DUFF Report. It is beautifully written and lushly illustrated. And now over to Michael and Paul:

Fan Down Under: Paul Weimer on his DUFF experiences

The absolutely lovely humans who run the Qwillery have been early and generous supporters of my work, for which I remain grateful indeed. And yes, I have a new book out Sept. 5, MJ-12: Shadows, the second in my series of super-powered Cold War spy thrillers.

But, you know, I figure if “super-powered Cold War spy thriller” didn’t grab you, I don’t know what a guest post could do to rectify that. So instead, I’m using this space to interview prolific SF/F reviewer, podcaster and super-fan Paul Weimer about his trip to Australia and New Zealand as part of the DUFF program. Because both Paul and DUFF are super cool.

What is DUFF? The Down Under Fan Fund helps American fans head to Australia and New Zealand for science fiction and fantasy conventions, and also helps fans from Down Under head to fan conventions elsewhere in the world. Paul was the DUFF delegate for 2017, and you can read about his adventures in his DUFF Report, available here for $7, with all proceeds going to the Down Under Fan Fund.

Without further ado, here’s the interview:

You've been involved in the SF/F community for a very long time. Tell me about the book, or books, that made you take the leap from reader to fan. Barring that, was there an incident or experience of some kind instead?

The advent of the High Blog Era of the Internet is what let me get into fandom in a real way, rather than just reading quietly. In the mid 2000's, I started to write short book reviews on my then-blog. This led to me participating in an online community that SF Signal was building. That got me gigs at The Functional Nerds, SF Signal itself, and I was off to the races. Podcasting came almost hand in hand with that, when I got invited to a SF Signal episode.


You're also an avid traveler. I've often thought travel has made me a better writer. Has it made you a better reader? A better community member/fan? A better reviewer?

Yes. Looking back on a travel adventure, its framed as a narrative, a story. Its moments, tender pieces, encounters, and an overall story from start to finish. Seeing how I construct my own story of my travels helps me write and think about how fictional stories work, or don't work.

Stubborness, persistence, determination and a desire to try and do good. I can try and do good, and use my powers to help illuminate authors, books, communities. Besides, I have one of the most mundane and boring jobs out there. Fandom is a way to channel my creative energies and escape the monochrome mundanity of daily life.


How different or similar is fandom in Aus/NZ? What stands out the most there?

For New Zealand, it was its tiny and very intertwined fandom/author community. The con in Taupo got 150 to attend, which means you could drop them into a Worldcon and have difficulty finding them again. There is also a strong recognition of the native (Maori) community and what that historical perspective and narrative brings to NZ SF and fantasy.

Australian fandom felt like a thousand points of light that do not interconnect as much as they themselves might like. The size of Australia meant that a National Convention (which moves every year) is mostly just the local population, with a few infusions from elsewhere. This means that the National Convention every year is a rotating set of people, rather than a repeat of the same far flung community. This gives Australian fandom the feel of a moveable feast.


For that matter, from what you've read and experienced, what perspectives to Aussies and Kiwis bring to the genre that we're missing out on?

The Aussies and Kiwis are very cognizant of being small players in the SF world. Getting visibility outside of their two smallish worlds is something they crave, and even more to the point, even New Zealand writers want more visibility just across "the ditch" in Australia.

There is also a strong ecological perspective in Australasian SF and fantasy, because climate change, invasive species, and other ecological problems are something they live with and cannot escape. It shows in their fiction, and in their panels and discussions.


What authors from Down Under should we be reading?

Plenty, but I will name just a couple: Thoraiya Dyer's debut fantasy novel, Crossroads of Canopy provides a lush world of Gods and life in the canopy of a rainforest. Cat Sparks strongly engages ecological perspectives in her fantasy and science fiction. Readers of Epic fantasy should be reading Helen Lowe, who has been quietly (too quietly from my perspective) putting out a strong, traditional epic fantasy series, the Wall of Night series. Even for its relatively comfortable lines, Lowe features strong female characters and a world where the often overweening patriarchal crap a lot of fantasy worlds revel in is nowhere to be seen.


What U.S. authors do you think would resonate particularly well with Aussie/Kiwi readers?

Kate Elliott, because I think writing in Hawaii as she does, has helped give her a perspective on worlds and societies and a global sort of understanding that Aussies and Kiwis can resonate with. Similarly, Max Gladstone, who has spent a lot of time in Asia, a part of the world very important to Australasia, has themes and ideas that will resonate well with readers down there. Similarly in the same vein, Ken Liu's fiction, both short and epic, would be something I think they could and should eat up with a spoon.


Your report has some gorgeous photography along with it. How long have you been shooting, what drew you to it, and for the photo nerds in the crowd, what rig are you using?

I came very late to photography in my life. Oh, I had a film camera since back in the early 90's, but many of the pictures I took on my first Trip to London them were plagued with pink blobs. I had no idea what I was doing and it showed. I discarded photography as a hobby worth doing for years.

Although I lost the roll and never developed the pictures, my last full day in Orange County, in 2003 was the next major attempt at trying photography again. I tried to document my trip to San Juan Capistrano, and started to feel what I had felt, and denied back on that London trip a decade earlier--that taking photographs of places, of adventures, was something I liked.

I got a digicam not long after arriving in Minnesota, ahead of a camping trip with my friends the Olsons. I thought taking some photos of our trip to Yellowstone might be fun. We went in 2005. Boy was I right. My first attempt at photography on a vacation turned out wonderfully, especially since I had a "big sister" in my friend Felicia, who had a DSLR and was not afraid to use it. I started practicing and learning more after that trip with my digicam, exploring Minnesota with my friends and on my own.

A second camping trip in 2007 to the Canadian Rockies was the clincher. Plenty of waterfalls and mountains convinced me that, yes, I liked this photography thing, especially a travel photography thing, and I wanted to capture better images. I bought a DSLR not long after that trip.

I currently shoot with a Canon 7D. My usual lens of choice is a 24mm Prime lens, although the "beast" of a 100mm macro lens got to see some good use on my DUFF trip.


Finally, waterfalls. What is it about shooting waterfalls?

Why waterfalls? First and foremost, the sound of rushing water makes them an appealing place to be around. I love visiting waterfalls because of the peace and balm they bring to me.

But why photograph them while I am at it?

Because waterfalls are in that space of being static and dynamic, remaining in place and yet ever changing, moment by moment, season by season. I can visit a waterfall in different seasons, different years, and due to the flow, the foliage, time of day, lighting and more, get an infinite variety of shots from the same cascade.

And if that wasn't enough, the sheer variety of waterfalls, from huge curtain ones to thin ones that plunge into a punchbowl means that a new-to-me waterfall will always have something I've not quite seen before.

--
Again, I urge you to buy Paul’s report and give it a read. It’s a very cool travelogue, has some great photos, and will make you want to book a trip post-haste. And the money is going to the Down Under Fan Fund to keep fans around the world connected.

Paul Weimer is a SF writer, reviewer, and podcaster and an avid amateur photographer. When he isn’t doing any of that, he’s often found rolling dice and roleplaying. His audio work can be found on the Skiffy and Fanty Show and SFF audio. His reviews and columns can also be found at Tor.com and the Barnes and Noble SF/F blog, amongst other places. Paul is best seen on Twitter as @princejvstin. 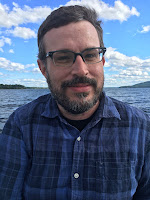 Michael J. Martinez is the author of five novels, including the Daedalus trilogy of Napoleonic era space opera adventures and the MAJESTIC-12 series of spy-fi thrillers. His short fiction has appeared in Cthulhu Fhtagn!, Unidentified Funny Objects 4, Geeky Giving and Endless Ages: Vampire. He's a proud member of the Science Fiction & Fantasy Writers of America and International Thriller Writers. You can find him online at michaeljmartinez.net or on Twitter at @mikemartinez72. 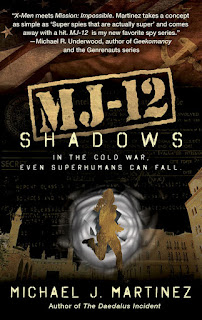 It’s 1949, and the Cold War is heating up across the world. For the United States, the key to winning might be Variants—once ordinary US citizens, now imbued with strange paranormal abilities and corralled into covert service by the government’s top secret MAJESTIC-12 program.

Some Variants are testing the murky international waters in Syria, while others are back at home, fighting to stay ahead of a political power struggle in Washington. And back at Area 51, the operation’s headquarters, the next wave of recruits is anxiously awaiting their first mission. All the while, dangerous figures flit among the shadows and it’s unclear whether they are threatening to expose the Variants for what they are . . . or to completely destroy them. Are they working for the Soviet Union, or something far worse?