I'm using PollCode for this vote. After you the check the circle next to your favorite, click "Vote" to record your vote. If you'd like to see the real-time results click "View". This will take you to the PollCode site where you may see the results. If you want to come back to The Qwillery click "Back" and you will return to this page. Voting will end sometime on December 31, 2018, unless the vote is extended. If the vote is extended the ending date will be updated.

The Malaise by David Turton. 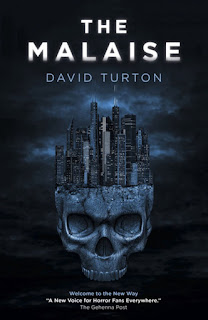 A Bad Deal for the Whole Galaxy (The Salvagers 2) by Alex White.

There are 3 debut novels for December.

The December debut authors and their novels are listed in alphabetical order by author (not book title or publication date). Take a good look at the covers. Voting for your favorite December cover for the 2018 Debut Author Challenge Cover Wars will take place starting on December 15, 2018.

If you are participating as a reader in the Challenge, please let us know in the comments what you are thinking of reading or email us at "DAC . TheQwillery @ gmail . com" (remove the spaces and quotation marks). Please note that we list all debuts for the month (of which we are aware), but not all of these authors will be 2018 Debut Author Challenge featured authors. However, any of these novels may be read by Challenge readers to meet the goal for December 2018. The list is correct as of the day posted.

By day she writes comic books. By night, she lives them.

MG Martin lives and breathes geek culture. She even works as a writer for the comic book company she idolized as a kid. But despite her love of hooded vigilantes, MG prefers her comics stay on the page.

When too-handsome-for-his-own-good Detective Kildaire asks for her comic book expertise, MG is more than up for the adventure. Unfortunately, MG has a teeny little tendency to not follow rules. And her off-the-books sleuthing may land her in a world of trouble.

Because for every superhero, there is a supervillain. And the villain of her story may be closer than she thinks…

Welcome to Los Angeles—where the secret worlds of the criminal and supernatural collide. Crime and black magic pay. In the City of Angels, no one does it better than Gabriel St. John and the House of the Crow…

ENDSVILLE introduces readers to the House of the Crow. Led by their enigmatic street captain Gabriel, the Crows are a secret coven of high-rolling occult gangsters operating out of Los Angeles. A gangland king by the name of Dante Washington enlists their aid to recover 34 million dollars in cash—stolen from him by what appears to be a hostile sorcerer.

The Crows battle through a vicious cycle of betrayal, violence, and black magic while on the hunt for Mr. Washington’s missing money. In the end, allies prove to be enemies, and there are much greater things at stake than covering up a multi-million dollar gangland heist.

2038: Rick Razor’s mark is seen all over the world, with his innovative Razor Technology owned by the majority of the population.

Professor Mike Pilkington sees a disturbing video on his RazorVision glasses and the world turns violently upside down. As almost every human being is wiped out through murder and suicide, Mike helps rebuild society, but his hunger for answers drives him on a collision course with the chilling force behind the apocalypse...

'The Malaise will keep you turning page after page, racing to get to the ending, and all the while hoping the technology giants of today don’t throw us into his horror of tomorrow.'
David Beers, Best-selling author