Interview with Anton Strout, author of The Simon Canderous Novels and The Spellmason Chronicles - May 15, 2015

Published:
It's Monday and it's snowing. Fortunately it's not a big storm. I'm glad because I've things to do today.

The Qwillery will have 2 interviews and giveaways this week: Anton Strout on Tuesday, February 22, 2011, and Rebecca Zanetti on Wednesday, February 23, 2011.  Rebecca's debut novel Fated and Anton's 4th Simon Canderous novel, Dead Waters, will be published tomorrow.

There will be comics on Thursday and photos on Friday unless something unexpected comes up... which happens all the time.

The March 2011 release list was posted yesterday. There is also an album of March covers at The Qwillery's Facebook page. 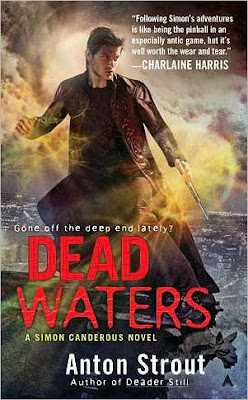 Dead Waters is the 4th book in the Simon Canderous series and the very best of the series so far.

Simon is a psychometrist. He can read the history of an object by touching it. In Dead Waters, Simon is still somewhat impulsive and reckless but he is maturing. He still makes his trademark wise-cracks, but he is growing emotionally as he must deal with some personal issues. I always find that Simon's heart is in the right place... despite the various creatures that want to remove it. Simon is a very likable protagonist.

I adore the supporting characters in this series: Jane Clayton-Forrester (Simon's technomancer girlfriend), Connor Christos (Simon's partner), Inspectre Argyle Quimbley (Simon's and Connor's boss), and Godfrey Candella (the D.E.A. Archivist). While Simon is the main character, the book really feels like an ensemble piece. I love the back and forth between the characters. There is genuine camaraderie.

Simon, Jane, and Connor must solve the mystery surrounding a university professor's unusual death. The murder deeply affects Inspectre Quimbley as he used to know the professor well. The storyline dealing the aging Inspectre is very well done. I really enjoyed learning more about his past.

Anton Strout deftly continues to lampoon bureaucratic red tape with New York City's Department of Extraordinary Affairs. I find the inner workings of the D.E.A. both fascinating and amusing. While the D.E.A. is facing severe budget cuts, fortunately none of my favorite characters lose their jobs. New York City is a great backdrop for this series.

Dead Waters borrows from mythology in an inventive way. I won't reveal which mythology or what was borrowed as it would be a major spoiler.

This is the darkest of the four books. I cried at one part of the story though there are far more moments that brought laughter. The pacing is excellent with a lot of action. The plot is really engaging. The mystery and its conclusion are handled beautifully. Dead Waters is a tasty mélange of murder, mystery, and mythology, with a dash of mayhem thrown in for good measure.

I give Dead Waters 5 Qwills.

I do recommend that you read this series in order.


Prior books in the Simon Canderous series: 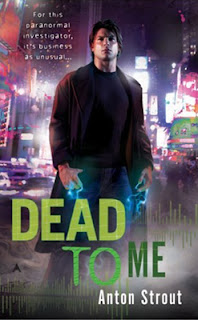 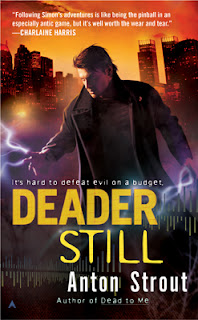 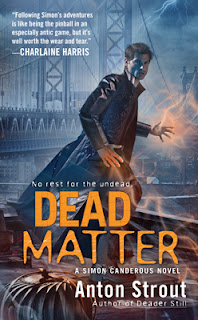 The spirit populace of Manhattan doesn't appreciate its well-deserved RIP being disturbed, and Department of Extraordinary Affairs Agent Simon Canderous is sent in to do damage control. Meanwhile, his vacationing partner, Connor Christos, is in a sorry state, and he tells Simon that each night he's being haunted by visions of his long-lost brother at his window. Simon is worried that his partner may be going crazy-or worse, maybe he's not...
Source: qwillery.blogspot.com
0 Comments+ Sharelabels (6)Flag
All5 QwillsAnton StroutBook ReviewsDead WatersSimon Canderousreview