Review and Giveaway: The Hike by Drew Magary 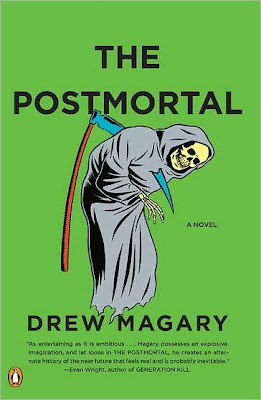 John Farrell is about to get "The Cure."
Old age can never kill him now.
The only problem is, everything else still can . . .

Imagine a near future where a cure for aging is discovered and-after much political and moral debate-made available to people worldwide. Immortality, however, comes with its own unique problems-including evil green people, government euthanasia programs, a disturbing new religious cult, and other horrors. Witty, eerie, and full of humanity, The Postmortal is an unforgettable thriller that envisions a pre-apocalyptic world so real that it is completely terrifying.

The UK cover and description (from Harper Voyager):

Please note that the UK book will not be published until  September 29, 2011. The Kindle ebook is available today. 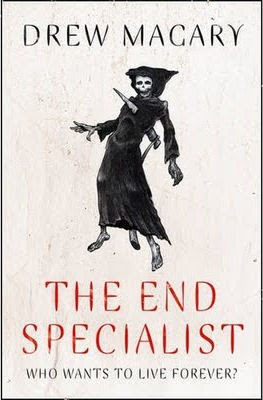 A gripping, compulsive thriller set in a future where the cure for ageing has been discovered… to devastating consequences

“You got me. I don’t want to die. I’m terrified of death. I fear there’s nothing beyond it and that this existence is the only one I’ll ever possess. That’s why I’m here.” (An excerpt from the digital journal of John Farrell, cure age 29) 2019. Humanity has witnessed its greatest scientific breakthrough yet: the cure for ageing. Three injections and you’re immortal – not bulletproof or disease-proof but you’ll never have to fear death by old age. For John Farrell, documenting the cataclysmic shifts to life after the cure becomes an obsession. Cure parties, cycle marriages, immortal livestock: the world is revelling in the miracles of eternal youth. But immortality has a sinister side, and when a pro-death terrorist explosion kills his newly-cured best friend, John soon realizes that even in a world without natural death, there is always something to fear. Now, John must make a new choice: run and hide forever, or stay and fight those who try to make immortal life a living hell. The e-book edition contains exclusive extra content - for those who want to find out even more consequences of the cure for ageing.

The Postmortal is a chilling story of our world gone wrong after the "Cure" for aging is found. Imagine what would happen if no one died from old age? Drew Magary deftly leads us down the postmortal path with a richly developed post-Cure world. The story is told through the eyes of John Farrell, a 29 year old lawyer at the time he takes the Cure. The novel is Farrell's journal and collection of articles from June 2019 to June 2079, 60 years post-Cure.

Farrell is a flawed character. There were times that I was almost moved to tears by Farrell's emotion - when he's with his father, when he relates the birth of his son. There were times when Farrell's actions or observations made me laugh. For the most part, he's a fairly average, though somewhat selfish person. Despite this I like him... most of the time.

The world Farrell shares with us has embraced the Cure with little thought regarding the consequences of what is going to happen when everyone lives forever. What makes this story ring true is the time that Drew Magary has spent on the little details - for example, the evolution of new 'religions,' new types of marriages, how overcrowding in prisons is dealt with when the prison population does not age, the Chinese reaction to the Cure, the loss of resources, and the new types of jobs that evolve in the years following the Cure. It all feels terrifyingly plausible. This is a sobering and, in its way, a cautionary tale.

Despite the somber topic, The Postmortal is a novel that I did not want to put down. I had to see what happened as the world moved ineluctably toward the not so wonderful future. It's not often that I read an apocalyptic/dystopian story that terrifies me, moves me, and makes me laugh. The Postmortal is just such a story.