Published:
It's the last Monday in January! January has been incredibly busy here and has flown by. February will be jam-packed as well. The Qwillery is ending January and will start February with a lot of 2012 Debut Author goodness!

Friday - Guest post by Laura Kaye. In the Service of the King (Vampire Warrior Kings 1), an e-novella,  will be published on February 1, 2012. North of Need (Hearts of the Anemoi 1) was published in November 2011.

Sunday - 2012 Debut Author Challenge Guest Post by David Constantine. The Pillars of Hercules, David's debut, will be published in March 2012.


Here's the book list for this week. There are a lot of books to choose from. And to help you shop, you can find a printable PDF of this week's book by clicking here. Click "File" on the left and then "Print (PDF)."

Guest Blog by Elisabeth Staab - A Vampire in Need of an Identity?

Published:
Please welcome Elisabeth Staab to The Qwillery as part of the 2012 Debut Author Challenge Guest Blogs. Elisabeth's debut novel, King of Darkness, will be published by Sourcebooks Casablanca on February 7, 2012.

A Vampire in Need of an Identity?
What comes to mind when you think of vampires? The castle-dwelling, human-drugging, polygamist, wide-eyed Bella Lugosi from 1931's Dracula? Suave, sparkly, eternally young Edward, from Twilight? Something in between? We've come a long way as a culture of readers and movie-watchers from seeing vampires as horror-movie monsters and villains to heroes and lovers

Somewhere along the way we realized that it was actually wicked-hot, to be desired and claimed by a hot-blooded, fanged, preturnaturally strong being who could--ahem--maybe also make love like there was no tomorrow. Or even being able to be that kind of character.

Meet Thad—the king, in King of Darkness. On the outside, he's everything you'd want in a sexy alpha-male: tall, stacked, and weapon-wielding. No undead coffin-creeping for this blood-sucker. But on the inside? Thad's having an identity crisis, and panic attacks. He’s caught—at first, anyway—somewhere between what’s expected of him and who he believes himself to be. That's right, super-human alphas can be afraid too.

You see, his father was the leader of the last remaining vampires on earth, and that duty has fallen to Thad earlier than expected. He's not really sure he has it in him to follow in dad’s footsteps. He also bears an unusual scar on his arm in the shape of a cross. According to a fortune told by an Oracle at his birth, he won't be able to lead properly or unlock the supernatural power he is supposed to possess until he finds the right mate to help him. That scar is his only key to finding her. Meanwhile, a competing—and of course eeevil supernatural race is trying to kill off his kind, and so the vampires must remain strong and united under their leader, or else it's deadsville for all of them. But no pressure, or anything.

So what's a panicked newly-ascended vampire king with a suppressed magical power and dating troubles to do?

Buckle up and head out in search of that prophesied mate, of course.

He's scrambling to make heads or tails of his new place in the world. To put the pieces of the puzzle together. To find a needle in a haystack…

And then he finds Isabel—another vampire, albeit one who has been living apart from the vampire culture, in the human world. At first, Isabel is another piece of the puzzle. But she doesn't wanna be. Hard to have a mate, fated or not, who's unwilling. Even the hottest of alpha males cannot get away with clubbing a vampire female over the head and dragging her back to his cave.

Even to a vampire, that's pretty wonky, and neither of them are exactly buying into it. That's the part that probably keeps this story firmly rooted in the paranormal. That would make it impossible to swap their species and suddenly have it be a "normal" contemporary story. The thing about prophecies, and destined pairings, is they make for a really cool fantasy. I love—and I think a lot of us do—the idea of a special someone out there for us somewhere in the universe. Destined for us.

But sometimes it blows our perceptions of who we are out of the water. Isabel’s a feisty club girl with a strong sense of independence. She doesn’t want to be anyone’s anything, thank you. Of all the challenges on Thad’s already very full plate, Isabel was one he definitely hadn’t bargained for. Part of figuring out who he’s supposed to be, turns out to be figuring out who he’s supposed to be to Isabel.

King of Darkness is a title with more than one meaning. The darkness is literal of course—Thad is a vampire, after all. But the darkness is more symbolic also, because when Thad finds Isabel he is in a very dark place that he doesn’t see a way out of. Isabel turns out to be his light, in more ways than one.

They just don’t know it at first.


About King of Darkness 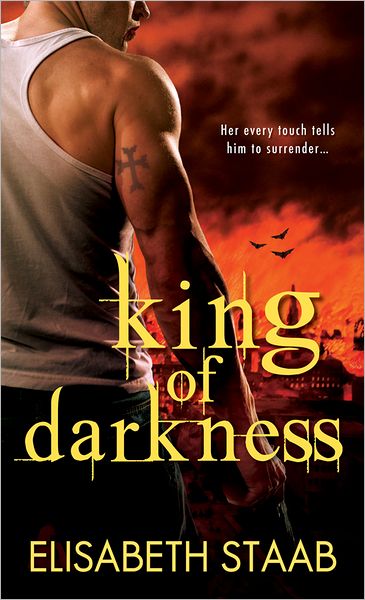 ETERNAL COMMITMENT IS NOT ON HER AGENDA…

Scorned by the vampire community for her lack of power, Isabel Anthony lives a carefree existence masquerading as human—although, drifting among the debauched human nightlife, she prefers the patrons’ blood to other indulgences. But when she meets the king of vampires this party girl’s life turns dark and dangerous.

BUT TIME’S RUNNING OUT FOR THE KING OF VAMPIRES…

Dead-set on finding the prophesied mate who will unlock his fiery powers, Thad Morgan must find his queen before their race is destroyed. Their enemies are gaining ground, and Thad needs his powers to unite his subjects. But when his search leads him to the defiant Isabel, he wonders if fate has gotten it seriously wrong…

They were lying to each other. The nervous dart of her eyes, the sudden flush of her neck… she had no intention of calling. Was she hoping he’d simply forget that the safety of their race was on the line? That a well- placed meteor would strike earth and wipe out all of their wizard enemies in one fell swoop?

For his part, Thad had assured her that she could take all the time she needed to think things over, but that wasn’t true, either. Time was running short. His earlier conversation with Tyra had revealed that a conservative member of the Elders’ Council was pushing for the society to be run by committee only, effectively rendering Thad’s position obsolete. Having that gang of old bastards at the helm would send their society back into the Dark Ages.

And all of the political stuff aside, there was a pull between Isabel and himself that he could not ignore. She didn’t seem able to ignore it either, but she was really fighting hard. He suspected that she had not opened up to many about the gruesome death of her parents. Subsequent questions had led to her hesitant admission that she had drifted for some time, feeding from humans and hiding from the sun in abandoned buildings and the like before stumbling onto the rave scene.

It was heart-wrenching to know that she had been on her own from such a young age. He wasn’t the sharpest knife in the drawer when it came to the emotions of females, but he would wager that opening up had left her feeling quite vulnerable.

So yeah, he’d give her a little space. Enough to regroup and to come up with a plan for convincing her to be by his side. And if he couldn’t convince her? Well, he was the king, for crying out loud. He’d make it happen one way or another. After all, he knew where she lived now. Even if she went elsewhere to hide, he could find her as he had before. She had to know that.

This was only the beginning.

Elisabeth Staab lives in Northern Virginia with her hero and soul mate, Tom. She has been a telemarketer, a web page editor, a software developer, a reader for the blind, a technical trainer, a coffee shop barista, a teacher, a tutor, a homemaker, a government project manager, a graphic designer, and a professional ebayer. Finally, she's landed on being a writer - which is what her high school guidance counselor originally suggested anyway.

She believes that all kinds of safe, sane, and consensual love should be celebrated--but she loves the fantasy-filled realm of paranormal romance the best.