Review: Unhinged by A. G. Howard 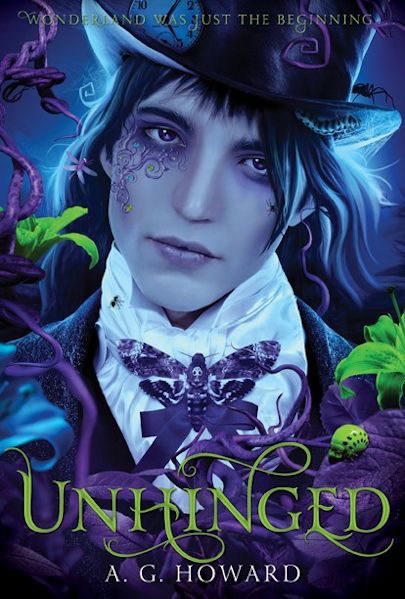 Alyssa Gardner has been down the rabbit hole. She was crowned Queen of the Red Court and faced the bandersnatch. She saved the life of Jeb, the boy she loves, and escaped the machinations of the disturbingly appealing Morpheus. Now all she has to do is graduate high school.

That would be easier without her mother, freshly released from an asylum, acting overly protective and suspicious. And it would be much simpler if the mysterious Morpheus didn't show up for school one day to tempt her with another dangerous quest in the dark, challenging Wonderland—where she (partly) belongs.

Could she leave Jeb and her parents behind again, for the sake of a man she knows has manipulated her before? Will her mother and Jeb trust her to do what's right? Readers will swoon over the satisfying return to Howard's bold, sensual reimagining of Carroll's classic.

In Splintered, (review here) book 1 of the Splintered series, author A.G. Howard demonstrates to her readers that Wonderland is real, but its reality is much more garish, vicious and deranged than Lewis Carroll dared to reveal. Book 2, Unhinged, takes place a year after Alyssa Gardner's return. Alyssa is a descendant of the original Alice and her harrowing adventures in Wonderland have left an indelible mark on her and her family. As her senior year comes to a close, she is looking forward to her immediate future; attending prom, studying art at an English college, and being close to her boyfriend Jeb. However, Alyssa's art has begun mimicking her nightmares and she finds herself creating disturbing and violent images of Queen Red rampaging and destroying Wonderland and its occupants. She soon discovers that her netherling companion, Morpheus, has crossed into her world in human form with hopes of trying to persuade her to return to Wonderland and set things right. But Morpheus isn't the only inhabitant from Wonderland that has crossed into the human world. To protect those she loves, Alyssa must finally embrace her heritage and the dark magical madness that gives her power.

I am seriously enthralled with this YA series. Howard's reinvention of Wonderland is absorbing and fascinating. I'm continually impressed that Howard finds the perfect balance of making the weirdly bizarre positively believable. Alyssa is a great hero. The nature of her dual citizenship gives her a Jekyll and Hyde persona and I have to admit celebrating when she goes full Hyde. She longs for a normal human life and is willing to fight for that, but also recognizes her obligations to Wonderland and her internal struggle for balance feels very realistic.

Love triangles can be tricky but I'm enjoying the bickering, misunderstandings and misconceptions between Alyssa, Jeb and Morpheus. They provide a humorous foil to some stressful situations. Having a daughter of my own, I thought the mother/daughter tensions were realistic and are depicted perfectly.

I have to hand it to A.G. Howard, Unhinged is a real page-turner. I read it in just a few days, excitedly devouring each page well into the wee hours of the morning. Unhinged can stand alone as Howard seamlessly intersperses the pertinent details from Splintered into its pages, but I advise starting on this adventure from its inception. I recommend this book to lovers of Lewis Carroll, admirers of strong female protagonists, and readers who crave adrenaline-packed adventures. It would also appeal to people who love the off-beat. The creepiness of the creatures from Wonderland are the stuff of nightmares and readers will revel in their sinister deliciousness. Let Unhinged draw you deeper and deeper down the rabbit hole. 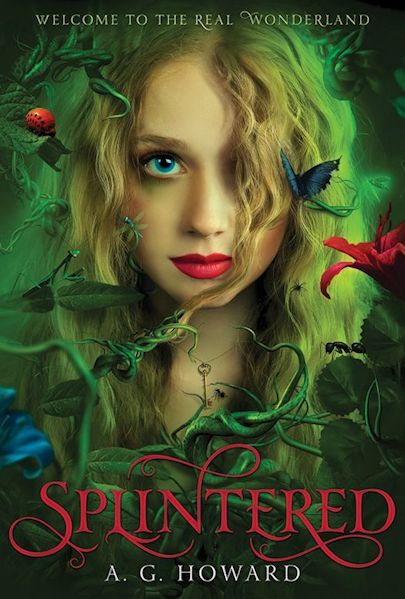 This stunning debut captures the grotesque madness of a mystical under-land, as well as a girl’s pangs of first love and independence. Alyssa Gardner hears the whispers of bugs and flowers—precisely the affliction that landed her mother in a mental hospital years before. This family curse stretches back to her ancestor Alice Liddell, the real-life inspiration for Lewis Carroll’s Alice’s Adventures in Wonderland. Alyssa might be crazy, but she manages to keep it together. For now.
When her mother’s mental health takes a turn for the worse, Alyssa learns that what she thought was fiction is based in terrifying reality. The real Wonderland is a place far darker and more twisted than Lewis Carroll ever let on. There, Alyssa must pass a series of tests, including draining an ocean of Alice’s tears, waking the slumbering tea party, and subduing a vicious bandersnatch, to fix Alice’s mistakes and save her family. She must also decide whom to trust: Jeb, her gorgeous best friend and secret crush, or the sexy but suspicious Morpheus, her guide through Wonderland, who may have dark motives of his own. 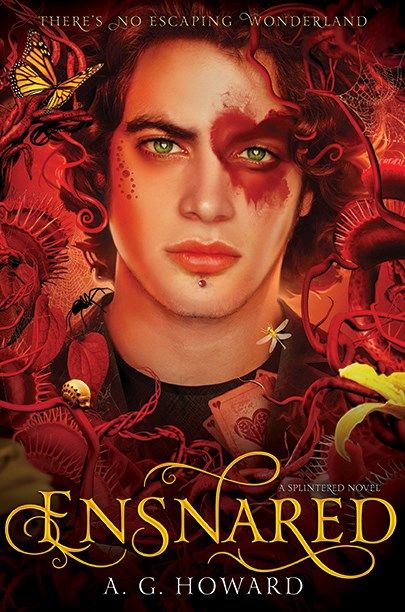 After surviving a disastrous battle at prom, Alyssa has embraced her madness and gained perspective. She’s determined to rescue her two worlds and the people and netherlings she loves. Even if it means challenging Queen Red to a final battle of wills and wiles . . . and even if the only way to Wonderland, now that the rabbit hole is closed, is through the looking-glass world—a parallel dimension filled with mutated and violent netherling outcasts.

In the final installment of the wildly popular Splintered trilogy, Alyssa and her dad journey into the heart of magic and mayhem in search of her mom and to set right all that’s gone wrong. Together with Jeb and Morpheus, they must salvage Wonderland from the decay and destruction that has ensnared it. But if they succeed and come out alive, can everyone truly have their happily ever after?