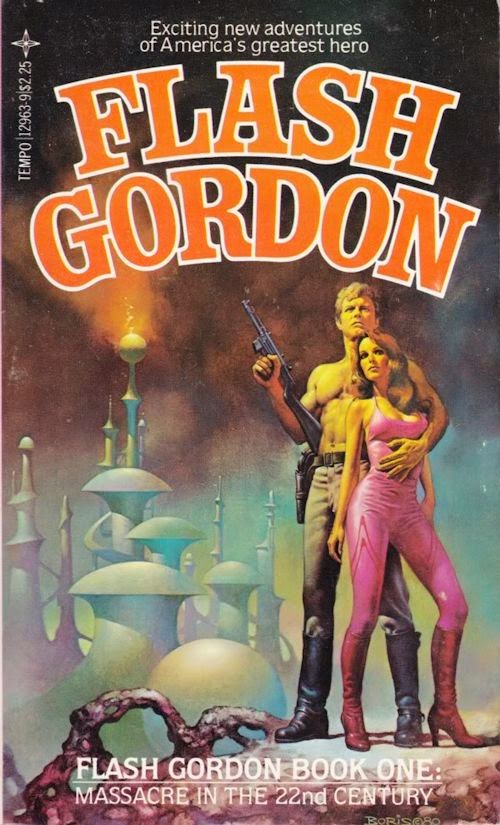 David Hagberg was born in Duluth, Minnesota on October 9, 1942. While serving in the Air Force he worked as a cryptographer. His writing career began in newspapers. Twister, published by Dell in 1975, was his first novel. Since then, he has published over 70 books under several pseudonyms: David Bannerman, Sean Flannery, David James, Robert Pell, Eric Ramsey. He has also been nominated for several awards. David Hagberg wrote six Flash Gordon novels from 1980-1981.

Sent on a mission to investigate the mysterious reappearance of the Interstellar Exploration ship GOODHOPE, Colonel Flash Gordon and his companions, Dale Arden and Dr. Hans Zarkov, discover much more than they had bargained for. Stranded in deep space, the trio find themselves drawn against their will into a war of worlds which has lasted thousands of years...and which threatens the very existence of the planet Earth.

I found this particular book at a very overpriced used bookstore. My only experience with Flash Gordon was the 1980 so bad it's fun film by the same name. It appears the book was released a few months before the movie and I have to wonder at the timing, maybe they hoped for a resurgence. I know Flash Gordon has had a long history in comics and serials, but I have never attempted to read or watch any of them. So, on a whim, I bought the book to see what it had to offer.

The story starts off with a Trans Federation ship finding a long lost spaceship the GOODHOPE, on a routine trip between planets. The GOODHOPE appears to be a ghost ship adrift in space. The Federation Military Forces seize the vessel and send a team to explore it in hopes of gaining answers about it and its crew's fate. The team is Flash Gordon, Dr. Hans Zarkov, and Dale Arden (Dr. Zarkov's niece). Almost immediately upon entering the vessel Flash Gordon and his team discover everyone aboard the ship has been murdered except for one missing crew member. Then, Flash and his team are attacked by none other than the Trans Federation as they are overly anxious to claim their prize. Flash and his team fight off the Trans Federation, and in the process, the ship, using some kind of self defense mechanism, launches itself into deep space, something far too advanced for this ship to do. They arrive 165 light years away from earth to crash land on an empty planet. They wander the jungle fighting off strange animals to find a deserted city still maintained by robot janitors that are hell bent on attacking Flash and his team. Dale gets kidnapped, and as Flash and Dr. Zarkov try to rescue her, she reappears to tell them she's fine and reveal the big secret. I don't want to ruin it for those of you planning on reading the book. I will say it ends in such away as to launch a series even if it was short-lived.

As you can tell from my recap there's plenty of action in the story with a bit of mystery. It keeps the pace of the book high and keeps you wondering what happened to the crew and why the ship sent them to a deserted planet. I'll be honest I wasn't hoping for a lot in this book and because of that I was pleasantly surprised that it was a fun read. It's a light pulpy sci-fi book.

The character's are very stereotypical and one dimensional. David Hagberg attempts to give Flash a little depth by making him a widow, but doesn't go much father than mentioning it a few times. Dale is an archaic female character with no other purpose than to swoon over Flash, have emotional meltdowns, and need rescuing. Dr. Zarkov is old and sickly and tires easy. He also likes to be smart sometimes. I'm being a little flippant, I know, and realize with such a short book and a lot happening there isn't a lot of room for depth. I also understand that these types of books were meant to be read and discarded. It's literary junk food.

If you like your sci-fi pulpy and fast-paced, you'll enjoy this book. If you're a fan of Flash Gordon, you'll enjoy this book. Apparently, this is a whole new take on the character. If you don't fall under either category, I'd stay away from it. This is a book to check out at a library or borrow from a friend. Due to a few scenes in which women seem to have to get undressed around Flash, and due to some minor violence, I'd recommend the book to older teens and adults.