Published:
Today is Martin Luther King, Jr. Day. If you have a moment take a look at The King Center.

I hope the upcoming week treats you well.  We have another very busy week at The Qwillery. It's chock full of 2012 Debut Author Challenge goodness!

Monday - 2012 Debut Author Challenge Guest Post by Elspeth Cooper. Songs of the Earth (The Wild Hunt 1) will be published in the US on February 28, 2012.

Tuesday - 2012 Debut Author Challenge Interview with Gaie Sebold. Babylon Steel was published on December 27, 2011 in the US.

Friday - 2012 Debut Author Challenge Guest Blog by Tes Hilaire.  Deliver Me From Darkness (Paladin Warriors 1) will be published on February 7, 2012.


Once again there are not many books out this week.

Published:
Please welcome Gaie Sebold to The Qwillery as part of the 2012 Debut Author Challenge guest posts. Gaie's debut novel, Babylon Steel, will be published in the United Kingdom and Canada on January 5, 2012 and in the United States on December 27, 2011 by Solaris.

Thank you for inviting me to guest blog.

Guest blogging is one of the many things I am still finding my way at; it seems to be an essential part of being a debut author in these techno-savvy times. Unfortunately, I’m more techno-idiot than techno savvy; and the fact that I would have to learn to use Twitter (badly, so far) is only one of the many things I didn’t know about being a debut author.

I didn’t know that I would write two novels (not to mention a couple of 30,000 word false starts and innumerable scraps, fragments, ideas and occasionally just titles) before I got an agent. I didn’t know that all the shrieks of glee and popping of champagne corks which accompanied getting an agent would have plenty of time to die away, because it would be several years and two more whole novels before I got a deal with Babylon Steel. I think if I’d known how old I would be before that happened, I might have given up long before – which would have been a pity. (At least, I think it would have been a pity, but I’m still waiting for the first reviews of Babylon Steel …)

Nor did I realise that the inevitable corollary to all this passing time was that when I did get a deal, the team I would be working with would all be delightful, enthusiastic - and rather frighteningly young. (Not to mention capable of spotting a plot-hole at 300 yards).

I didn’t anticipate that I would end up getting published with a novel which is, among other things, about sex and sexual attitudes, and that this fact would alternatively delight me and terrify the life out of me.

I didn’t know how utterly essential my critique group would be (T Party Writers – http://t-party.org.uk/ - nothing to do with the other T Party in any way) They got me up to standard, kept my nose to the grindstone, and provided endless ideas, support, commiseration, cheerleading etc. as required. They’re like one of those dispensers that produces whatever drink you need, from espresso to hot chocolate. They produce actual drinks, too, for sorrow-drowning or celebration as required – and what more could one ask?

I didn’t expect that I would get fits of inappropriate grinning every time I remembered that Babylon Steel was actually going to be published.

I didn’t anticipate the occasional flurry of rampant panic at the thought of strangers I’m never going to meet reading what I’ve written; not just the sexy bits, any of it. Which is daft, considering it’s what I’ve been working for all this time.

I didn’t expect the sense of unreality which continued to make me believe that this wasn’t really happening, until the very moment I received my author copies and realised Babylon Steel really did exist, a book, an actual thing, separate from an idea in my head. Of course, it’s not actually published yet, so I continue to be haunted by the fear that something will happen to prevent it ever reaching readers. If the zombie apocalypse occurs before the release date, I am going to be seriously cross, but somehow, not entirely surprised.

Because all of the above applies to being a debut author whose book hasn’t actually been released. Which is another thing I didn’t realise – how many stages there are to publication, even after you’ve written the book and got it as polished as you possibly can. Agent – whoop! Deal – hallelujah! Then there are press releases and you see it for the first time; ‘BABYLON STEEL…debut novelist Gaie Sebold.’ And you squee a lot. Then your book title appears on the publisher’s website. Then there’s cover design. Possible release dates. First edits. Cover design again. More edits. Getting blurbs. Actual cover appearing on the publisher’s website. More edits. And writing the dedication and acknowledgements, and getting the actual release dates. Each stage is exciting, each brings the book a bit closer to reality. It may sound tedious, but to be honest I’ve loved every minute of it; possibly I’m strange. But I have a book. Babylon Steel, by…me. It really exists. And I thought I knew how cool that would be, but I didn't. It's amazingly cool.

And it still will be, even if there is a zombie apocalypse. 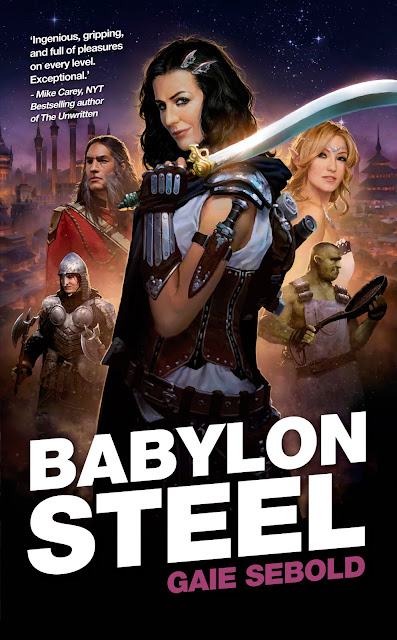 Babylon Steel, ex-sword-for-hire, ex-other things, runs the best brothel in Scalentine; city of many portals, two moons, and a wide variety of races, were-creatures, and religions, not to mention the occasional insane warlock. She's not having a good week. The Vessels of Purity are protesting against brothels, women in the trade are being attacked, it's tax time, and there's not enough money to pay the bill. So when the mysterious Darask Fain offers her a job finding a missing girl, Babylon decides to take it. But the missing girl is not what she seems, and neither is Darask Fain. In the meantime twomoon is approaching, and more than just a few night's takings are at risk when Babylon's hidden past reaches out to grab her by the throat. 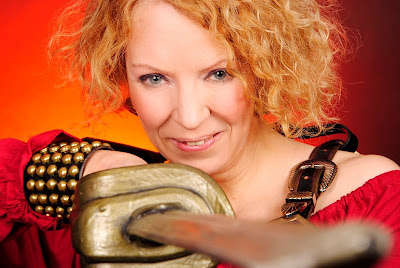 Gaie Sebold was born in the US, lives in South East London, and works for a social change charity. She has had several short stories and a book of poetry published. Her debut novel Babylon Steel is due out from Solaris on 27 December (US). ("Ingenious, gripping, and full of pleasures on every level. Exceptional." Mike Carey.)

She began writing shortly after learning to read, and has produced a large number of words, many of them different. She has worked as a cleaner, secretary, till-monkey, stage-tour-manager, editor, and now works for a charity and runs occasional writing workshops.

She is an obsessive reader, enthusiastically inefficient gardener and has been known to run around in woods hitting people with latex swords and declaim poetry in public, though not usually at the same time. She is currently working on a sequel to Babylon Steel, another novel in collaboration with her partner, writer Dave Gullen, and a romance, with orcs. She likes orcs.