For more information and to read Chapter 1 of Invincible head to Sherrilyn Kenyon's website by clicking here.

Here's an explantory note about the Chronicles of Nick from the Sanctuary website.

The Chronicles of Nick *is* Nick’s real and true past. There is a huge surprise (several actually) in the book that I don’t want to spoil, but when you read the book, everything you think is an inconsistency will make perfect sense to you. More than that, you will understand exactly why Nick is the way he is and why he continues to hate Acheron the way he does. But you have to be patient. All will be clear on May 25, 2010.

Nick’s series will run until it intersects with Night Pleasures and then Nick will have his own novel in the Dark-Hunter world.

Book one, Infinity, begins when Nick meets Kyrian.
Book two will pick up the next day after Infinity ends and will be out Feb 2011.

Remember the one promise that I try to keep in every book: Just when you think you know the truth about a character or event, you find out that things are seldom what they seem. Nick is one of those characters. There’s a lot more to our little Cajun than what you’ve seen to date. That’s why it takes 12 books to tell his story.

There are many, many secrets you’ll learn about a lot of characters, including Cherise and especially Jaden and Jared. Just hold on… you ain’t seen nothing yet :) 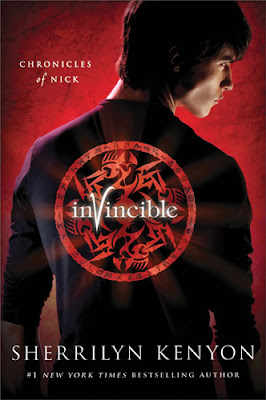 Nick Gautier’s day just keeps getting better and better. Yeah, he survived the zombie attacks, only to wake up and find himself enslaved to a world of shapeshifters and demons out to claim his soul.

His new principal thinks he’s even more of a hoodlum than the last one, his coach is trying to recruit him to things he can’t even mention and the girl he’s not seeing, but is, has secrets that terrify him.

But more than that, he’s being groomed by the darkest of powers and if he doesn’t learn how to raise the dead by the end of the week, he will become one of them...
Source: qwillery.blogspot.com
0 Comments+ Sharelabels (6)Flag
AllChronicles of NickDark-HunterInvincibleSherrilyn KenyonYoung Adultbook trailers