Review: The Line by J.D. Horn 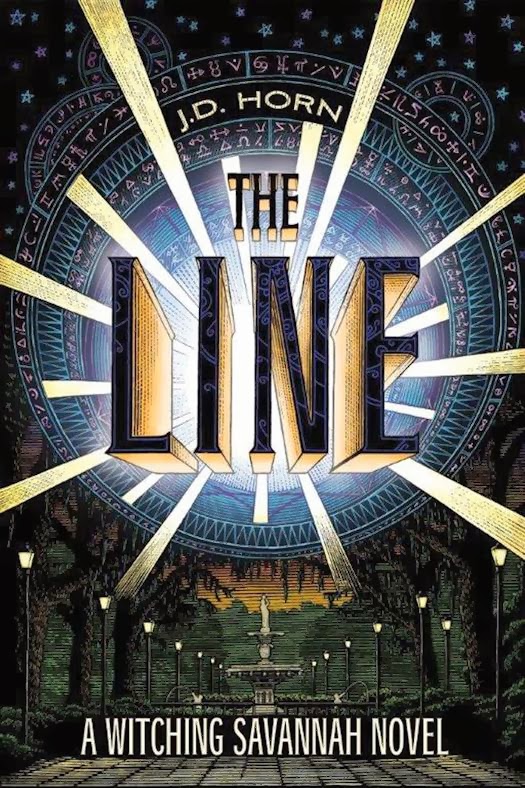 Savannah is considered a Southern treasure, a city of beauty with a rich, colorful past. Some might even call it magical…

To the uninitiated, Savannah shows only her bright face and genteel manner. Those who know her well, though, can see beyond her colonial trappings and small-city charm to a world where witchcraft is respected, Hoodoo is feared, and spirits linger. Mercy Taylor is all too familiar with the supernatural side of Savannah, being a member of the most powerful family of witches in the South.

Despite being powerless herself, of course.

Having grown up without magic of her own, in the shadow of her talented and charismatic twin sister, Mercy has always thought herself content. But when a series of mishaps—culminating in the death of the Taylor matriarch—leaves a vacuum in the mystical underpinnings of Savannah, she finds herself thrust into a mystery that could shake her family apart…and unleash a darkness the line of Taylor witches has been keeping at bay for generations.

In The Line, the first book of the Witching Savannah series, J.D. Horn weaves magic, romance, and betrayal into a captivating Southern Gothic fantasy with a contemporary flare.

I was impressed with the opening concept of J. D. Horn’s The Line. The idea of twins who do not share everything equally, especially magic, was particularly intriguing. At nearly 21, Mercy has a distinct Southern voice, with a unique job. She is the proprietor of “The Liar’s Tour of Savannah,” where she takes groups of people around the streets of Savannah, getting them buzzed on their choice of alcohol and telling them lies about the sites of the town. Starting off with a Liar’s tour was a great introduction to this novel.

I also liked the contrast between the magic of the Taylor family with the hoodoo of Mother Jilo. Despite having a long-time boyfriend of her own, Peter, Mercy is in love with her sister’s boyfriend, Jackson. Because she loves Maisie with more than her life, Mercy is determined to stop moping about Jackson and concentrate on Peter; however, she decides she needs help and she turns to Mother Jilo to make her a love spell so she will fall in love with the boy who has always loved her. Unfortunately, everything goes wrong after that, starting with finding her least-favorite person, Aunt Ginny, dead.

I found Mercy to be a somewhat frustrating main character. I did not understand her desire for Jackson, since he seemed to be more stuck-up than the level-headed Peter. I also found it hard to understand her lack of displeasure with her own sister, who seemed to have it all – the beauty, the perfect boyfriend, and most of all, the magic. Her sister seemed to be spoiled with all the love and devotion of a family that simply left Mercy to her own devices. Somehow Mercy escaped feeling resentful about her circumstances, which made me even more frustrated with her.

Most of the characters in this story were difficult to like. All of them seemed to have secrets of their own which somehow tainted them – Mercy herself was not above it. Despite knowing how wrong it was, she still tried to obtain a love spell. Without giving much away, I can say that the love spell backfired, and that is when the book gets better.

Despite some flaws, I enjoyed The Line. Unlikeable characters seem to be in keeping with Southern gothic stories, and eventually, Mercy grows up enough to become more likeable. I somewhat saw the ending before it happened, but it still came with enough twists to make it memorable. Overall, I look forward to seeing what happens to the Taylor family in the next two novels.
Source: qwillery.blogspot.com
0 Comments+ Sharelabels (7)Flag
All47NorthBook ReviewsDoreenJ. D. HornThe LineWitching Savannahreview

Published:
Happy first Monday in February. The groundhog saw his shadow yesterday and predicted 6 more weeks of winter here. I think he was right for once - schools are closed today due to snow! There are 2 more snowstorms predicted for this week.

This is a very full release week with 3 debuts:

Wolfhound Century by Peter Higgins comes out in Trade Paperback.