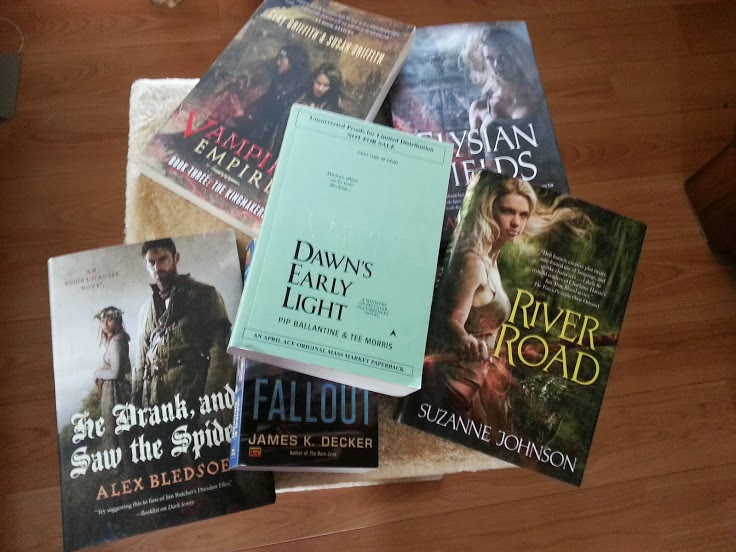 This was a really productive week for me on the reading front but more importantly on the book receiving front. I was mega lucky to get a whole delicious box of books from Qwill. Check it out! I was super douper excited as in the box was the ARC of Dawn's Early Light by Philippa Ballantine and Tee Morris.  I LOVE, LOVE, LOVE this series and can hardly wait to dig into it. I was very noble and decided to let the hubinator read it first. How nice am I? I was also really lucky to receive King Maker which is the final book of the Vampire Empire series. I have been trying for about 2 years (poss 3) to find this book in the UK, well find it for a reasonable price and so I jumped at the chance when Qwill said she had it. I also have one of the Eddie Lacrosse books, the next two books in the Suzanne Johnson's Sentinels of New Orleans series and you can just barely see Fallout by James K Decker. Keep your eye out for what I think of these books in either full reviews on here in my Week in Review.

I did also read a book or two! I finished both Vn and iD which are the first two books of the The First Machine Dynasty series by Madeleine Ashby. I will be doing a full review of both of these books so I don't want to give to much away here. What I can say is that I love the covers. They are both eye catching and almost set the mood for the books themselves. I am only going to share the one cover with you so that I don't spoil you for the full review!

I did the happy dance when The Undead Pool by Kim Harrison popped onto my Kindle. I was really looking forward to this installment from The Hollows series as it seemed like quite a while since the last book was out. I like this series but was a tiny bit disappointed by this book. I thought it read like the final book of the series but when I looked on Harrison's website she said she is contracted for one more. I am not sure what plot they are going to squeeze out of Rachel and her quirky group of friends as almost everything seemed to get wrapped up. My favourite character, the fairy Jenks was much more in the background. There were relatively few exclamations like 'Tink's titties' for my liking. Both Jenks and Ivy appeared in every chapter but they shared much less of the 'limelight' than they did in other novels in this series. Nearly every secondary character was involved in some way in the plot which also lent itself to the 'final' book feeling. I am always a tad disappointed when an author continues a series when they have hit on a great exit novel. This aside I did like it and look forward to the actual final book. 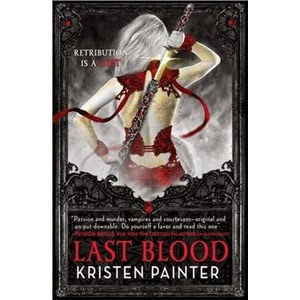 The last book I want to tell you about is Last Blood by Kristen Painter which is the actual final book of the House of Comarre series. I really enjoyed this series at first. I thought that Chrysabelle was quite kick ass for a vampire blood donor and the cursed vampire Malkom reminded me of Angel (from Buffy the Vampire Slayer). As the series progressed I lost interest in the characters and almost gave up at book 4. I was doing a little trawl of Amazon and discovered this final instalment on sale so thought I might as well get closure. All I can say is I wish this book had stayed locked in the forgotten part of my memory. I was quite bored and flicking pages towards the end. This series suffered from too many characters who all seemed to fight to be the reader's favourite and none of them succeeded...at least not with me. As a consequence they were rather one dimensional. If they were good they practically had a halo and if they were bad they cackled like a witch. All this did was make me lose interest as the characters were way to predictable which gives me a big case of the snores.

Well that is it for me. I am hoping to read a few of my 'Qwill goodies' next week so please check in and find out what I read and what I thought. Until then Happy Reading.