Pride and Prejudice and Zombies: Dreadfully Ever After and Necklace from Cemetery Cat Jewelry 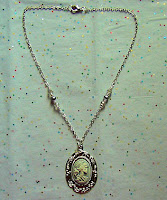 I'd probably more like London, because of the all the fancy parties and shopping!


Winners have been contacted and have until 11:59PM US Eastern Time on Tuesday April 12, 2011 to respond or The Qwillery will very randomly choose another winner or winners.
Source: qwillery.blogspot.com
3 Comments+ Sharelabels (8)Flag
AllCemetery Cat JewelryJennifer LyonNight MagicPride and Prejudice and Zombies: Dreadfully Ever AfterSteve Hockensmithgiveawaynecklacewinner

Jennifer:  When I start a new project, I like to have a brand new sharpened pencil, and I get very cranky when the kids steal my pencils! While I do that bulk of my work on the computer, I like to “think” by free writing on notebook paper, and also I make notes on a yellow pad relating to research, character names, etc.

Jennifer:  Some of my early favorite authors were Julie Garwood (loved her historical romances), Jude Deveraux, Judith McNaught, Stephen King and Dean Koontz—which shows how mixed my reading tastes can be! I loved romance and I loved the horror. It’s probably not a big surprise that I write paranormal that combines deep love with some dark and gritty story lines!

These days some of my favorites are Laura Wright (love her Mark of the Vampire Series!) Regan Hastings awesome witch series, Nalini Singh, Larissa Ione…I could go on and on!

Jennifer:  I started out writing as a panster, but the more I write, the more I learn to plot ahead of time. I have gained a better grasp of the pitfalls that will derail a story. But that said, my books will always follow the characters, no matter what my outline says. I’ve accepted that I will always run into issues that force me to stop and replot. And that’s okay—it’s part of the process, part of finding the right way to tell the characters’ story.

Ailish Donovan is a witch whose pure heart and good intentions cannot change the fact that she is bound to a demon. If she doesn't break the binding completely by her 24th birthday, she will die. Ailish has always fought her battles alone, but a dangerous slayer who craves a taste of Ailish's blood may become her most unlikely savior.

TQ:  What sort of research did you do to create the Wing Slayer Hunters world?

Jennifer:  I have a notebook full of research! I have information on demons, gods, witches, winged creatures like dragons and a phoenix. I’ve researched chakras and various things related to witches like candles, herbs, crystals, lunar cycles and anything that I come across. Oh and for Phoenix, the hero of Night Magic, and I have pages of Chuck Norris jokes—Phoenix loves Chuck Norris jokes!

TQ:  Who is your favorite character(s) to write in the Wing Slayer Hunters series?

Jennifer:  That changes all the time, but Phoenix and Ailish are special to me. They are both damaged, but they rise above their pasts and the dark torments they have suffered to fight for each other. Ailish’s blindness makes her tough and capable, and she brings the hardened and tortured Phoenix to his knees. Their story has stayed with me even though I finished writing their book nearly a year ago.

TQ:  Without giving anything away, what it your favorite scene or scenes in Night Magic?

Jennifer:  That’s hard to answer! But one of them is the first time Phoenix meets Ailish. From a distance he can tell that she’s hot and sexy, but once he gets close he sees her damaged eyes and realizes she is blind. The moment shocks him and shifts him in a fundamental way he can’t even grasp yet. I love that scene because where other people mind see scars and pity, Phoenix sees in Ailish true strength and courage.

TQ:  How many books are planned for the Wing Slayer Hunters series?

Jennifer:  The two books out this year, NIGHT MAGIC and SINFUL MAGIC make four so far. I know I want to write at least three more books, telling the stories of Ram, who is one of the original five Wing Slayer Hunters, and the two newer hunters, Linc Dillinger and Eli Stone. I love these books and will write them as long as I can.

Jennifer:  Next is SINFUL MAGIC out May 24th, 2011. That is Kieran DeMicca’s story and I’m excited about that book too. A dragon named Dyfyr has a role in the story, and I absolutely fell in love with Dyfyr.

Jennifer:  Thank you for having me! It’s a pleasure and I always love to talk about books and reading!


Read an excerpt of Night Magic at Jennifer's website by clicking here.

THE HUNTER AND THE HUNTED

In the days when powerful witches used their magic to shield humanity from demons, their allies and guardians were a group of men gifted with preternatural abilities of their own–the witch guardians. But when a band of witches traded their humanity for demonic power, the ancient bond was broken, and the guardians became the hunters.

Darcy MacAlister knows nothing of demons or magic. But this beautiful young woman is about to discover the truth about her past . . . and her future. For she is a witch–not just any witch, but the key to breaking the curse that has plagued witches and the men who hunt them. For if a hunter kills an innocent witch by mistake, the price is no less than a piece of his soul.

Axel Locke, gorgeous leader of the Wing Slayer Hunters, has sworn never to shed the blood of the earth witches who have resisted the temptation of demonic power. But when his sister is cursed by a demon witch, he discovers that Darcy MacAlister may hold the cure–if she can master her newfound powers in time. When the chase begins and Axel and Darcy come face-to-face, this hunter must weigh his soul against his honor–and against his heart.

When an ancient pact is broken, powerful witches who once used their magic to help humanity become the twisted playthings of demons, and the mortal men who once protected the sorceresses become witch hunters, cursed with the longing to spill the witches’ blood: an irresistible craving that will cost witches their lives and witch hunters their souls.

\The Wing Slayer Hunters fight this curse, guarding innocent witches until the urge to harm them grows too strong–then they must kill their own. Wing Slayer Sutton West has always honored that vow. His own father killed himself rather than go rogue. But now Sutton is tempted as never before by Carla Fisk, a brilliant psychologist and dynamic witch whose twin sister, Keri, was murdered by rogues.

Bound by blood and passion, Carla and Sutton dare not succumb to their deadly attraction. Yet when a mysterious rogue named Styx joins forces with the demon Asmodeus, witch and hunter have no choice but to work together. For Keri’s immortal soul is at stake–and with it, balanced on a knife-edge, is the fate of humanity itself.

THEIR LOVE IS DESTINED TO RISE AGAIN

Ailish Donovan is a witch ready to do battle. Raised unaware of her powers, she is just sixteen when her mother tricks her into binding with the demon Asmodeus. Pure-hearted Ailish escapes with the connection incomplete but pays a heavy price: For the next eight years, she is shunned by her earth sisters and tormented by Asmodeus’s lust. After hardening her body and mind as a champion kickboxer, Ailish returns home to break the bond—or die.

The Wing Slayer Hunter Phoenix Torq is sworn to protect earth witches, but he is shaken by Ailish’s fierce independence—and his own forbidden cravings. Dark, impulsive, and haunted by his troubled past, Phoenix likewise arouses Ailish in ways she finds disturbing—and irresistible. Torn between mistrust and desire, each must go to hell and back to seek the magic that could set them both free.

Roxanne “Roxy” Banfield refuses to be like her mother, a fertility witch who uses sex as nothing more than a magical weapon. Roxy rejects that life and is determined to become mortal to pursue her dream of real love and a family. All she has to do is avoid meeting the one man whose sensuality can release her powers. But steering clear of this magnetic stranger is easier said than done.

Wing Slayer Hunter Kieran “Key” DeMicca channels the dark violence that lives inside him into a popular comic book series about an ancient dragon named Dyfyr, but only Key knows that Dyfyr is real. Lately he finds himself drawing images of a young woman in peril, and assumes that she’s just a product of his imagination—until he meets Roxy. Struck by her beauty and her resemblance to his sketches, he feels compelled to protect her. As steamy magic, lethal danger, and timeless love collide, Roxy must become what she swore she would never be—and awake a part of Key that will threaten to destroy them both. 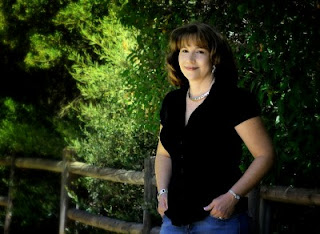 Jennifer Lyon always wanted to be a witch. When her witch-powers didn't materialize, she turned to creating magic in her books. SOUL MAGIC is the second book in an enchanting, passionate and supernatural series. Jen’s also has a super secret alter ego known as Jennifer Apodaca, the author of the award winning Samantha Shaw Mystery Series. Visit Jen at http://www.jenniferlyonbooks.com/

What:  One commenter will win a copy of  Night Magic from Jennifer Lyon.

What is your favorite bird of prey?

Who and When:  The contest is open to all humans on the planet earth with a mailing address. Contest ends at 11:59pm US Eastern Time on Wednesday, March 30, 2011. Void where prohibited by law.