MATT WAGNER’S MAGE SERIES COMES TO EPIC CONCLUSION AFTER 35 YEARS OF ADVENTURE, FINALE ISSUE TO FEATURE 8-PAGE GATEFOLD
PORTLAND, OR, 11/26/2018 — Image Comics is pleased to announce that long-running, cult-favorite series MAGE by Matt Wagner will feature a special, breathtaking 8-page gatefold in the finale issue of the series, MAGE: THE HERO DENIED #15. This highly collectible issue will bring the series to a stunning conclusion after 35 years of adventure.

First premiering as part of the indie comics boom in the ’80s, MAGE tells the story of the classic Hero’s Journey through the lens of a contemporary setting and as an allegorical autobiography of Wagner himself.

Wagner’s fictional alter-ego, Kevin Matchstick, confronts both supernatural enemies as well as his own humanity in his heroic role—a modern-day incarnation of the legendary Pendragon, wielder of the mystic weapon, Excalibur.

A vanguard of the independent comics movement for decades, Wagner is perhaps best known for his epic crime-and-sci-fi noir narrative, Grendel, but it is in the pages of MAGE that his most personal story comes to fruition.

“MAGE has been an utterly unique and rewarding experience for me,” said Wagner. “I’d like to thank both my new and longtime readers, especially those dedicated fans who have stuck with MAGE through the long gaps between the various books of the trilogy. Your continued interest and passion for this story have always served to inspire me. And I’d also like to thank the entire Image Comics crew in their unfailing support and enthusiasm for seeing this project through to completion.”

It will retail for $7.99 and arrives in stores on Wednesday, February 27th. The final order cutoff deadline for comics retailers is Monday, February 4th.

MAGE: THE HERO DENIED #15 will also be available for purchase across many digital platforms, including the official Image Comics iOS app, Amazon Kindle, Apple Books, comiXology, and Google Play. 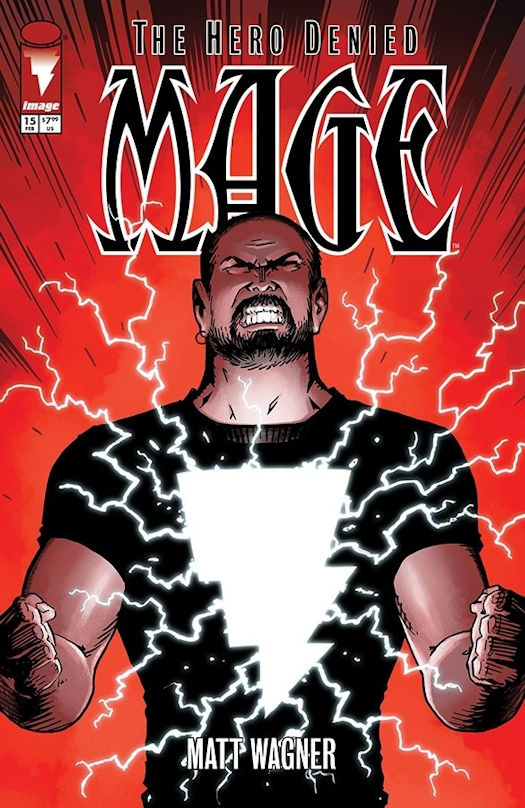 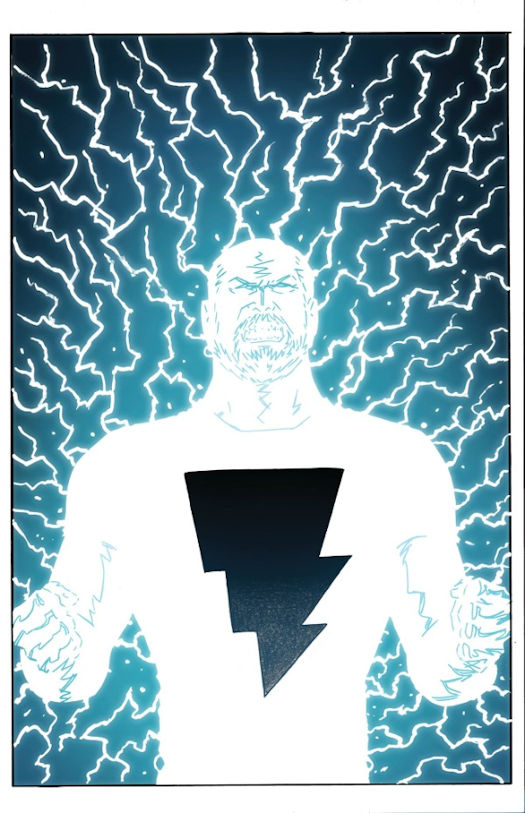 This long-awaited conclusion to the epic fantasy trilogy MAGE follows the adventures of the reluctant everyman hero Kevin Matchstick who—after encountering a shaggy and beguiling wizard—discovers he is the reincarnation of the legendary Pendragon and able to wield the power of the mystical weapon, Excalibur.

"The Hero's journey can be long and arduous… but returning to the world of Mage always feels incredibly empowering,” said Wagner. “I'm really excited to finally be presenting this dramatic conclusion to the epic tales of Kevin Matchstick… and his third Mage.”

MAGE #0 (Diamond Code MAY170639) will hit stores on Wednesday, July 12th at the introductory price of $1.99. The final order cutoff deadline for retailers is Monday, June 19th.

For fans new to MAGE, a reprint of the MAGE, VOL. 1 trade paperback (Diamond Code MAY170640) will also be available on Wednesday, July 12th. The final order cutoff deadline for retailers is Monday, June 5th. 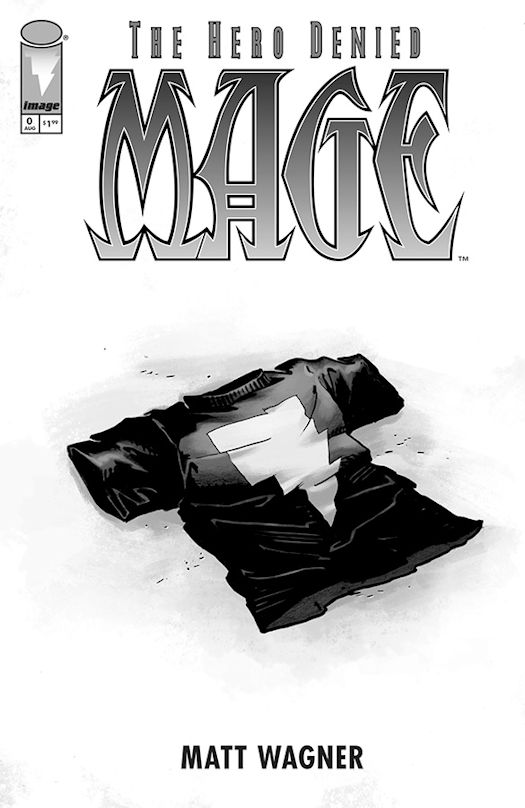 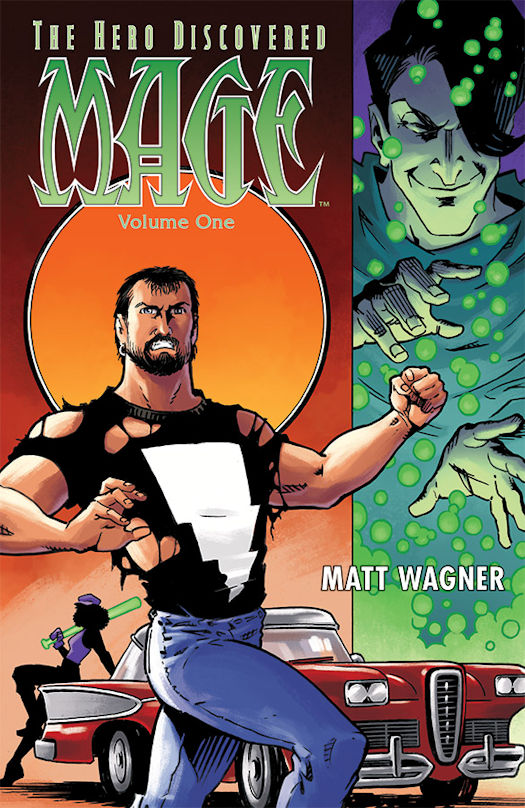 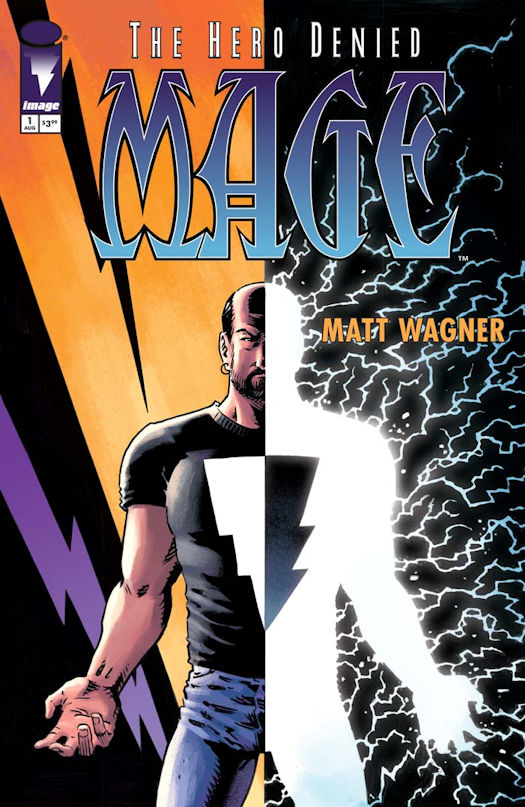 
NEW YORK, NY, OCTOBER 7–Days before the doors open on one of the year’s largest events in pop culture, Dark Horse Comics and Dynamite Entertainment announce the first in a series of upcoming crossovers. Matt Wagner will write and draw an all-new Grendel story steeped in the pulp-noir world of The Shadow!


The Shadow is one of the most renowned and enduring pop-culture creations of all time, a multi-media character that established the original archetype of the modern super-hero. Grendel, Matt Wagner’s epic saga of dark aggression, has been a trailblazing powerhouse of independent comics for over thirty years and, for many fans, the elegant and deadly Hunter Rose is the quintessential version of the character. Combined, these legendary and iconic characters represent over a century of publishing history!


Best-selling author Hunter Rose is secretly the masked assassin and criminal overlord known only as Grendel. When an arcane artifact comes into his possession, Grendel finds himself thrust into a world for which he seems destined, where style and violence intersect to form a dazzling golden age. He will soon discover that this New York also has a fearsome protector—a dark and mysterious avenger whose name is spoken in hushed whispers, The Shadow!


“Ever since the smash success of my two previous crossover events (with Batman), I’ve had many offers over the years to see Grendel cross blades with a varied host of other characters,” comments Grendel creator, Matt Wagner. “But none of those opportunities ever excited me as much as this possibility. I’ve been a huge fan of The Shadow for many, many years and my love of the character finally saw fruition when I got the chance to literally re-define his origins by writing The Shadow: Year One for Dynamite. To have the chance to both write and draw The Shadow facing my own creation is something of a dream come true! It's also adds yet another instant classic to my long legacy of Grendel projects with Dark Horse Comics.”


“I'm looking forward to this project for many reasons, not the least of which is Matt Wagner's return as both writer and artist of Grendel” said Dark Horse president and publisher, Mike Richardson. “The fact that I share Matt's enthusiasm for one of the greatest fictional characters of all time, The Shadow, makes it all the more exciting. Dark Horse and Dynamite are proud to announce this great comic series from one of comics' premier creators.”


“Matt Wagner truly is a living legend. I’ve personally known and been a fan of Matt’s since Grendel first appeared in the early ‘80’s, and one of the first prestige comics I bought was the Terminator by Matt with James Robinson from Dark Horse. Matt’s an incredible story teller and has written three series for Dynamite, including The Shadow: Year One” said Dynamite publisher, Nick Barucci. “When the idea for a Shadow/Grendel cross-over was suggested, and Matt stated that he would write it AND illustrate the series in a Prestige format, let’s just say that you can’t quantify the excitement in our offices. This is such an incredible series, and the first of more projects that Dynamite and Dark Horse are announcing.”


This exciting new three issue series will be released in three 48 page prestige format issues in 2014! Look for more details in the months to come, and check out this exclusive interview on Comic Book Resources! 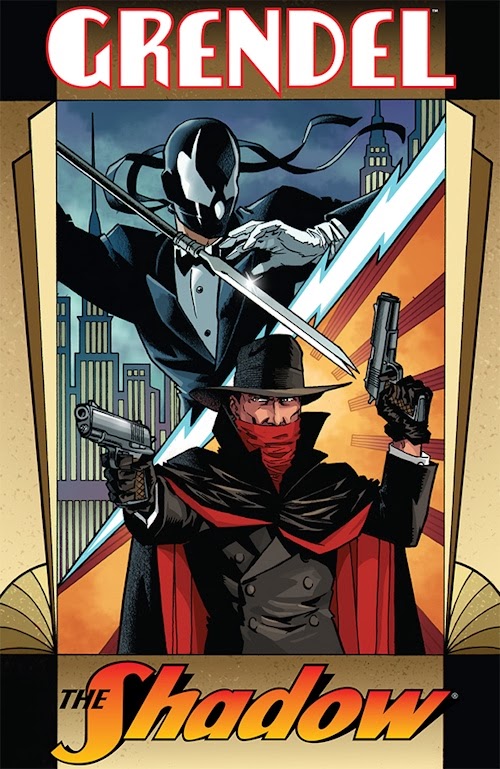