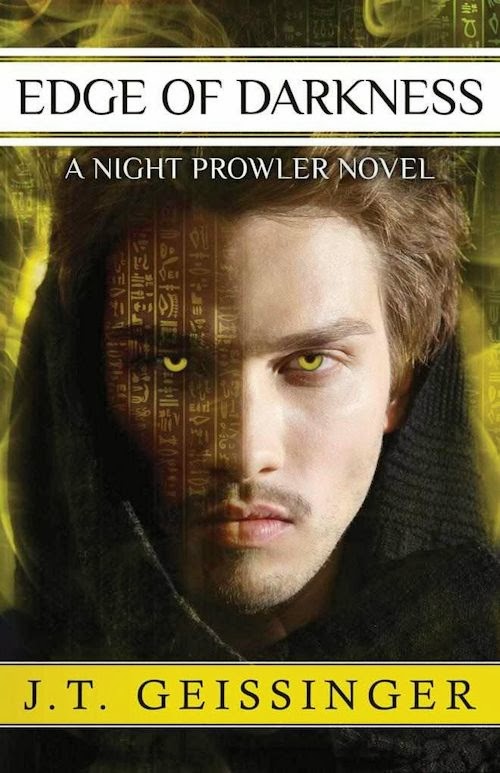 Six years after a shocking tragedy left her emotionally and physically scarred, Ember Jones lives a life of quiet isolation in Barcelona. Determined to keep her troubled past a secret, she keeps her head down and her heart locked up tight. Until the day a beautiful, mysterious stranger walks into her life, and her carefully controlled world is shattered forever.

Christian McLoughlin is unlike anyone Ember has ever met. Wealthy, cultured, and utterly charismatic, he also has dark secrets of his own. They succumb to the undeniable pull between them and embark on a passionate affair, but things turn explosive when the truth about Christian and the reason he came to Barcelona is exposed. As their dark pasts collide, the two unlikely lovers find themselves caught in a web of danger and deceit that neither of them might survive.

The Edge of Darkness, where hunter becomes hunted, no one can be trusted, and love is the most dangerous game of them all.

If I could get away with a one word review then my review for Edge of Darkness would be simply 'wow'. But no, I need to say more about this fantastic instalment of the Night Prowler series. Geissinger, pulls out all the stops in the story of Christian, who we first meet in book 1, Shadow's Edge. Edge of Darkness has something for everyone and then some. Its has tension, suspense, great new characters, a sassy heroine with a deep, dark secret and development of not 1 but 2 plot arcs. It stays true to its PNR roots but not to the detriment of the plot.

The first book of this series starts with a love letter and this fourth installment starts with a letter as well but of a different kind. This time it's a note from the super, evil baddy Caesar whose true character was revealed in book 3. Caesar's letter is addressed to all of  humanity informing them of his supremacy, the power of the Ikati and their imminent demise. This sets the tone for the whole novel with the heartless cruelty of this antagonist at the forefront of the plot yet again.

The story takes place in Barcelona and Geissinger has selected another beautiful, historic city for the setting of her love story. Our heroine, Ember moved to the city with her father after her mother and brother died in a tragic car accident. This is where Ember's deep dark secret comes in and Geissinger teases the reader throughout the plot as to what it could be and leaves us hanging until the final chapters to reveal it all. Ember is one of my favourite types of heroine. She is strong, flawed and best of all plain! Nothing is better in PNR, in my view, then when one of the love interests is amazingly gorgeous and the other is described as plain. It's very Pride and Prejudice, with Eliza Bennett's not living up to the beauty of her sister Jane but for her 'fine eyes'. Ember reminded me of a modern day Eliza Bennett. She was smart, sticks up for herself and of course, had rather than 'fine' eyes had piercingly intelligent ones.

Fulfilling the role of the gorgeous hero is Christian who readers will remember from Shadow's Edge. Christian has been sent to Barcelona to track down the evil Caesar and encounters Ember at the bookshop that she owns with her evil stepmother. Qwill asked me about my use of the word 'evil' to describe Ember's stepmother as it sounded a bit 'Cinderella-esque'. She wasn't evil in the traditional meaning of the word but was very unpleasant to Ember and had two equally unpleasant daughters making Ember seem quite a bit like Cinderella. Christian slowly starts to woo the reluctant Ember knowing the dangers of courting a human. Christian has his own secrets to keep and runs the risk of them being exposed if he gets any closer to her. Opposites attract is the theme of this story with the gorgeous, wealthy and shapeshifting Christian falling in love with the plain, poor and very, very human Ember. This is a relationship that's hard not to like.

Caesar isn't the only antagonist we are encounter in Edge of Darkness. Geissinger brings back a baddy we met in one of the earlier books in the series. I'm not going to say who is back to cause mischief and mayhem so you will have to read the book to find out. Multiple antagonists with their own motivations can make a plot confusing but in this case Geissinger cleverly ties these threads together and we are left again wondering how and when the plot arc will be resolved. There is another big cliff hanger in store for the reader so prepare yourself.

Well what can I say? This is a great book. Hats off to Geissinger as she managed take me from 'I like this series' to 'I love this series'. I have already started to bite my nails in anticipation for what may be in store in final few books of the Night Prowler series.

A Little Research on Sex in PNR and UF - Poll

Published:
I'm conducting some completely unscientific research into sex in Paranormal Romance (PNR) and Urban Fantasy (UF).  I started reading romance back in the 70s. I've seen the number of sex scenes increase from zero to more than zero over the years. Sex might have been implied, but it was never set out in the books I read back then. Things have changed. I don't recall sex in fantasy either. Or maybe I just read fantasies that had no sex in them.

I'd really like to know what you think. All answers are anonymous of course and you can pick more than one answer. I've tried to keep the questions as neutral as possible.

The poll is open for 2 weeks, after which I will share the results and open a discussion.
Source: qwillery.blogspot.com
14 Comments+ Sharelabels (4)Flag
AllPNRUFpollsex scenes

Published:
I've been thinking about Paranormal Romance (PNR) vis-a-vis Urban Fantasy (UF) lately. I like both subgenres though I lean a bit toward Urban Fantasy. Maybe this is because I cut my teeth on H.P. Lovecraft, Isaac Asimov, William Tenn, Thomas Burnett Swann, tales of King Arthur, and The Magazine of Fantasy & Science Fiction. I did not read much romance at all. So I came to PNR via the PN part. Please note that the simple distinctions that I draw are mine. Others have and will continue to define PNR and UF differently than I do.
For the most part I read Paranormal Romance because of the paranormal elements not because of the Happily Ever After (HEA). The endings are not really meant to surprise. I know that there is going to be an HEA. It's how the main characters get there that can make PNR interesting and enjoyable. It's the romance that's important in PNR. The trials and tribulations of the couple-to-be is what drives the story.
In Urban Fantasy events and the world in which the characters exist, rather than romance, drive the story. There can be romance and relationships, but the building to an HEA is not the point of the story. In general UFs tend to be more gritty than PNRs. If you want to strictly define "Urban" Fantasy it should be set in an urban landscape, of course.
This is not to say that there has not been a lot of blurring of the imaginary lines between PNR and UF. Some paranormal romances are very close to urban fantasies and vice versa.


What: Either The Mammoth Book of Paranormal Romance 2 or Mean Streets. Winner's choice. 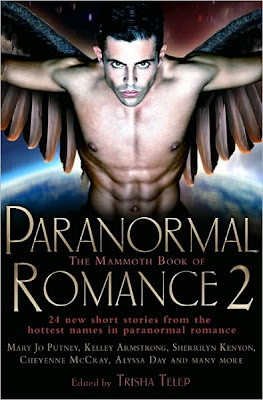 This exciting follow-up to the successful Mammoth Book of Paranormal Romance contains more than twenty stories to take you to another time and place. Including the best names in the field, this collection is filled with mythical beasts, magical creatures of all shapes and sizes, handsome ghosts, angels, and mortals with extra-sensory perception that play out their extraordinary desires. 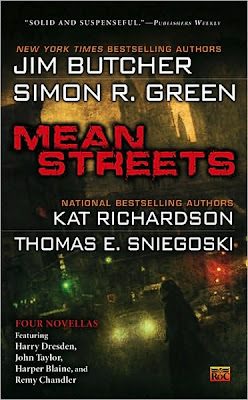 An anthology of "solid and suspenseful" novellas from

Here are four novellas featuring Harry Dresden, John Taylor, Harper Blaine, and Remy Chandler...paranormal private investigators who walk the streets no one else can walk and take the jobs no one else will take...

Of course, if a case involves werewolves, zombies, demons, or other "unusual" circumstances, it may cost a bit extra.

How: Leave a comment telling The Qwillery if you prefer PNR or UF? Have you read any books that you would classify as both? How do your definitions differ than mine? Can someone tell my why so many UF heroines appear on their book covers bare-midriffed and tattooed?

When: The giveaway is open to all humans on the planet earth with a mailing address. Giveaway ends at 11:59pm US Eastern Time on Monday, October 6, 2010 so have your comment in by then.
Source: qwillery.blogspot.com
17 Comments+ Sharelabels (3)Flag
AllPNRUFgiveaway