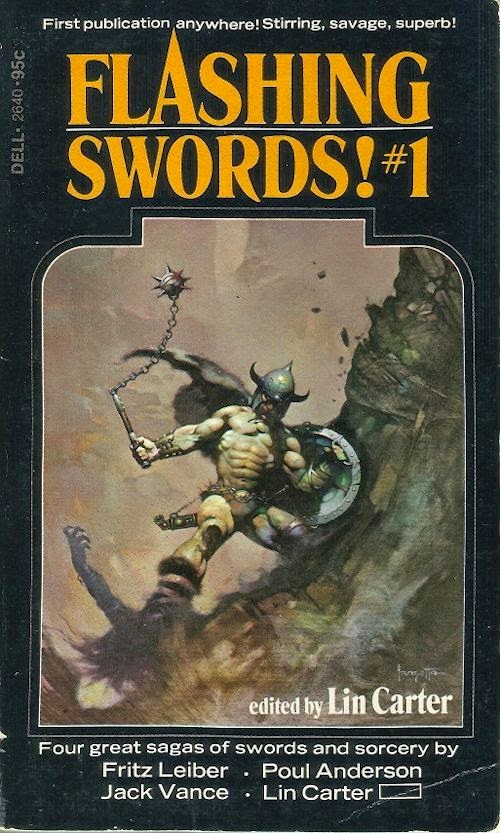 Poul Anderson - November 25, 1926-July 31, 2001. Poul Anderson was born in America, but, after his father's death, spent several years in Denmark until the outbreak of World War II. He attended the University of Minnesota. Poul published his first story Tomorrow's Children in 1947.

Lin Carter - June 9, 1930-February 7, 1988. Lin Carter served in the Korean War and attended Columbia University. He worked as a copywriter before starting his creative writing career. The Wizard of Lemuria, his first book, was published in 1965.

Fritz Leiber - December 24, 1910-September 5, 1992. Fritz Leiber attended the University of Chicago. For a time, he worked as a preacher and actor. His first published story, Conjure Wife, was published in 1943.

Jack Vance - August 28, 1916-May 26, 2013. Jack Vance attended the University of California in Berkley. He had many odd jobs throughout his life. Due to poor vision, he was unable to serve in World War II, but memorized the eye chart to be able to join the Merchant Marines. His first published story was The World-Thinker in 1945.

Flashing Swords! Anthology was created by eight authors who were fans of the fantasy sub-genre Sword&Sorcery and decided to create the club: Swordsmen and Sorcerers' Guild of America. They contributed previously unpublished short stories for the anthology. When they submitted the collection to their publisher, the publisher said it would be too large to publish, so they put half the stories in the first volume and the other half in Flashing Swords! #2. The anthology series ended after five volumes.

“The still less than momentary qualm which Death experienced at this point was far deeper and stronger than that which he had felt in the case of Lithquil. Fafhrd and the Mouser had served him well and in vastly more varied fashion the the Mad Duke.”
The Sadness of the Executioner by Fritz Leiber

“Morreion made a furious motion; as his hand swept the air, it left a trail of sparks. 'Magic derives from personal force! My passion alone will defeat the archveults! I glory in the forthcoming confrontation. Ah, but they will regret their deeds!'”
Morreion by Jack Vance

“Stunned, beaten, naked, with hardly a tool or weapon among them, the merfolk followed their lord. Tauno hung, fists clenched on harpoon, until they were out of sight. The last stones of the royal hall toppled, and Liri was a ruin.”
The Merman's Children by Poul Anderson

“Three goblins were entangled in the webs. They kicked and struggled furiously, spittling like cats, but only managed to become more tightly and completely enmeshed in the sticky green stuff. The six other goblins came flying, howling, at him.”
The Higher Heresies of Oolimar by Lin Carter

One day, while browsing my local used bookstore, I found a bundle of four books entitled Flashing Swords! #1-4. The first two covers were by Frank Frazetta, and I was familiar with about half the authors and liked their work and style, so I decided to give it a try. I like discovering old authors from my chosen genre's past. Out of the four authors in volume #1, I was familiar with Fritz Leiber and Jack Vance, but had only actually read Fritz Leiber before. I read several stories in the Songs of the Dying Earth edited by George R.R. Martin, which is a tribute to Jack Vance's world. I had no exposure to Lin Carter or Poul Anderson.

Lin Carter's introductory essay “Of Swordsmen and Sorcerers” was a fascinating read for the historical background he gave in the sub-genre and the roles each of the authors played in it. I knew that the sub-genre was born out of Robert E. Howard's work, but I did not know that the term 'Sword & Sorcery' was coined by Fritz Leiber. Below, in my quote section, you will find Carter's definition of the sub-genre.

Fritz Leiber's “The Sadness of the Executioner” is a Fafhrd and the Mouser tale, but the duo are not the starts of the tale. Death takes the center stage as he seeks to fulfill his quota for the current quarter. Running out of time and needing two heroes to fulfill that particular quota he decides to send a couple enraged people to kill the pair. Unfortunately, the pair of anti-heroes are not so easy to kill, leaving Death with no choice but to quickly kill two other heroes to fulfill his quota. I've always enjoyed reading Leiber's stories and I enjoyed this story. It was my favorite of the collection. I only wish it had been longer (it's the shortest story in the book). If you've never read a Fafhrd and the Mouser tale, I would not start with this one, as I've mentioned they play a minor part in the story. I would however recommend you try Leiber for a fun, easy quick read.

Jack Vance's “Morreion” takes place in his famous The Dying Earth world. As the sun is ready to die, and with it Earth, magic has once again returned. The landscape has changed and is nothing like the Earth we know and love. Vance is an unique writer. His writing style is, in my opinion, very modern. He's like the grandfather of our modern 'weird' sub-genre. He makes up races, places, and creatures that are unlike your regular fantasy troupes and gives them names that don't lend themselves to description and does minimal physical descriptions and little to no background information. This can leave the reader a little lost or confused. That said, he's a very lyrical writer and he makes you want to read his story in hopes you'll come to understand it how he intended. This story involves wizards and trying to steal IOUN stones from Morreion. They end up taking the stones from Morreion, but then begin to fight over who gets to keep the stones. I look at Vance as the type of author you read and study if you want to get a Ph.D. in fantasy reading, or you're bored with low-brow fantasy authors, which I find a little ironic, as most people have a certain prejudice of Sword & Sorcery fantasy as low-brow writing.

Poul Anderson's “The Merman's Children” is based on a medieval ballad of Agnete and Her Lover. The story is about a human female who falls in love with a Merman and ends up living underwater and giving birth to several children who are able to live above or below the surface. Then, one day the mother decides she misses her life above ground and by resurfacing unknowingly sets a course of destruction and trials for the Merfolk and her children below. The story itself was entertaining, and I liked the originality of it, but it was a slow read. It didn't inspire me to seek after more of Anderson's books, which is the point of an anthology.

Lin Carter's “The Higher Heresies of Oolimar” is a little too much like a ode to Conan or Hercules. When a non-fantasy reader thinks of Sword & Sorcery this is the type of hero they would imagine. It stars Amalric, an immortal super human with side kick wizard named Ubonidus. Amalric is given a quest by a sphere, that I assume is a communication device between him and the higher gods, to go and destroy a man named Thun and his evil city of death-conquerors. However, along the way to this quest, Amalric and Ubonidus have a detour in the city of Oolimar. This was obviously set up to be a introduction to a novel or the beginning of a series of short stories, as the main quest never takes place. It's an easy story to read, but I didn't really enjoy it or find anything in the characters or world that made me want to see if Amalric ever defeats Thun.

Now that I've read all of the stories, how do they hold up today, 41 years later? The first volume is weak. Even the authors I like, I didn't like these particular stories enough to suggest any of you go hunt this book down. I found it enlightening to learn more about the sub-genre itself and would recommend the introduction to anyone who would like to learn more about Sword & Sorcery. I'd highly recommend any fan of fantasy to check out or borrow a Fritz Leiber or Jack Vance book. I find them very entertaining. For Anderson and Carter, I wouldn't bother reading their work unless you're a fan and a completest. There is violence and sexual situations in the stories, but nothing graphic, so I would recommend the book for older teenagers and adults.

“We call a story Sword & Sorcery when it is an action tale, derived from the traditions of the pulp magazine adventure story, set in a land, age or world of the author's invention-a milieu in which magic actually works and the gods are real-a story, moreover, which pits a stalwart warrior in direct conflict with the forces of supernatural evil.”
Lin Carter in Flashing Swords! #1
Source: qwillery.blogspot.com
0 Comments+ Sharelabels (9)Flag
AllBook ReviewsBranniganFritz LeiberJack VanceLin CarterPoul AndersonRetro ReviewsSword and Sorcery 1review