Published:
It's the last Monday in September. One of my favorite months starts tomorrow and not only Halloween takes place in October. Tomorrow is the 5th Anniversary of The Qwillery, but more about that tomorrow.

I started reading Styxx by Sherrilyn Kenyon (St. Martin's Press, September 3, 2013) on Friday and finished it on Sunday (there were many interruptions). It's the 23rd novel in her Dark-Hunter series and the print book is 848 pages long. It's substantial when you hold it. But I didn't buy the print copy even though I will eventually. I picked up the eBook. Today the eBook on Amazon costs $7.99; the print book costs $16.46. At Barnes & Noble the print book costs $16.78 and the eBook also cost $7.99. However on Friday, when I was in B&N with my Nook the eBook cost $6.49. Of course I bought the eBook.  I do need to check one chapter against the print copy because it seemed to end abruptly with no transition to the next chapter. That could just be a formatting issue with the eBook and it would make more sense when I look at the book. Sometimes that does happen. 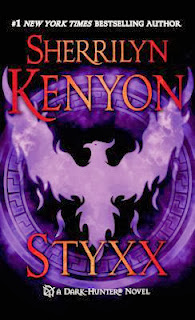 I enjoyed Styxx. Like Acheron, the first part of the novel is set in ancient times. And like Acheron, the second part of the novel is set modern times. If you are familiar with the series, you know why these 2 novels would mirror each other like that - Acheron and Styxx are twins. It's a good series and fairly consistent so I would recommend you start at the beginning. However, you probably could jump in with Styxx, Ms. Kenyon gives you enough information to make sense of what is going on. Or start with Acheron to get the flip side of Styxx's story. I know that I will be going back to a couple of the previous novels to see how certain events where depicted in them from their different viewpoints. I'm fascinated that Ms. Kenyon was able to so effectively weave so much of her Dark-Hunter history into this novel and have it make sense. She's either got very, very good notes or an eidetic memory.

Styxx is a very good novel. It's well written, but again like Acheron, is heartbreaking and it can be difficult to read about some of the things that happen to Styxx. It is brutal at times so stay away if abuse in the extreme is a hot button for you. I was really pleased to finally get to the modern era section of the book and away from the incredible physical harshness of the first part of the novel. You really get to see Styxx's character in this novel and come to understand him. If anyone in the series deserves an HEA it's Styxx.

Some pieces of the series fall into place during the novel, which I liked immensely, but there is more to come. There are still unanswered questions and things happening that will require the Dark-Hunters' attention.

Just some quick thoughts on Styxx!

There are a few books out today. Look for the October 2013 Release list later in the week. (Yes, I'm going to be a bit late with it!)